Q Acoustics is a UK‑designed brand that has been making a name for itself at the value end of the market, but its Concept line showed the world that an attainably-priced loudspeaker can have truly world-class innovation and sound. The Q Acoustics Concept 50 floorstander continues that trend.

The company’s statement of intent was the Concept 500 floorstander and Concept 300 stand-mount. Launched in 2017, these offered a genuinely new and fascinating way of designing a cabinet with extraordinarily low cabinet interaction. Those concepts have trickled down very effectively into the Q Acoustics Concept 50 floorstanding loudspeaker. A key part of this is the company’s Gelcore cabinet construction, which in the best way possible, is the ultimate expression of ‘inside every big loudspeaker, there’s a small loudspeaker trying to get out’; Concept 50 features an enclosure inside an enclosure, the two separated by what Q Acoustics calls ‘a non-setting gel’, which is a neat, not technical way of describing constrained layer damping. This helps dissipate high-frequency vibration from the moving drivers (that energy gets turned into heat in the adhesive gel). 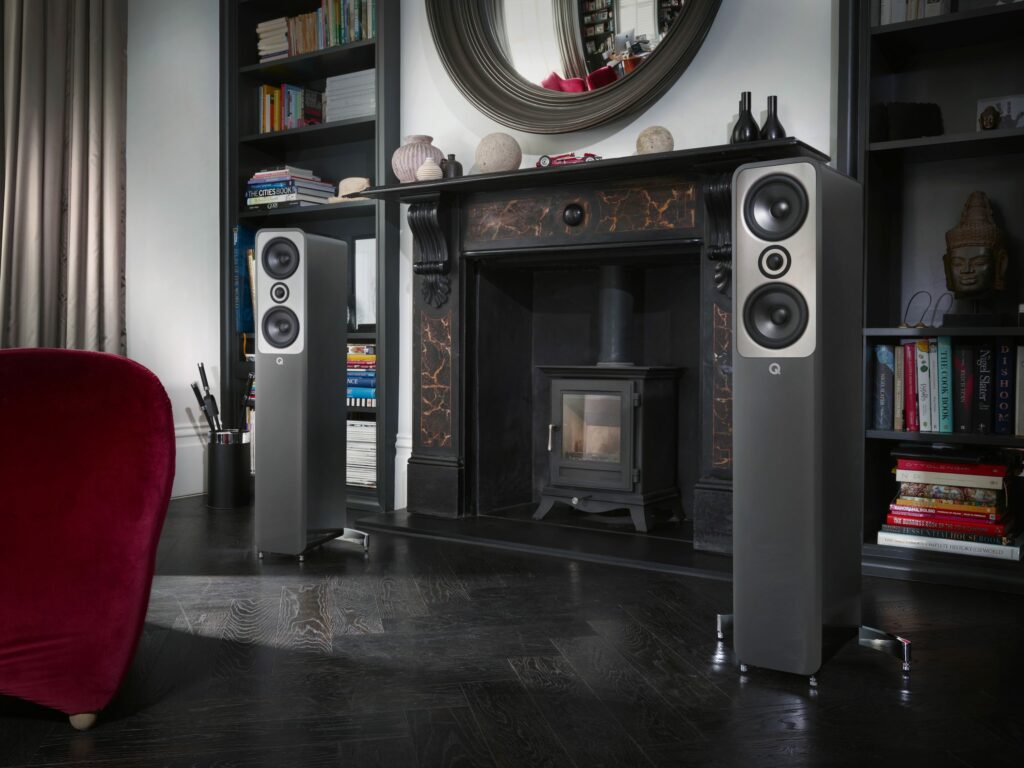 Having an enclosure enclosed in an enclosure should be rigid enough for most designs, but Q Acoustics trickled down its P2P (Point to Point) internal reinforcement system from its Concept 500 design. P2P is a bracing system applied to those parts of the inner cabinet most prone to low-frequency reverberation. To achieve this, Q Acoustics ran extensive laser interferometry testing and Finite Element Analysis (it claims down to microscopic levels) to examine the cabinet’s performance, and the amount and positioning of the internal bracing are applied accordingly, creating Goldilocks-style cabinet control as a result.

The fun continues inside the inner enclosure with two specially-designed Helmholtz Pressure Equaliser tubes to help mitigate internal reverberation and reduce standing waves. Vibration is further damped by both having the crossover sit in its own sprung isolation base plate and the way the drivers are mounted to the 3mm thick aluminium front baffle, using pre-tensioned studs. The drivers themselves are all unique to Q Acoustics, with a fully chambered, hermetically sealed 25mm fabric dome tweeter in a shallow waveguide that uses an oversized voice coil for greater power handling. This is coupled to a pair of 125mm mid/bass units in a vertical D’Appolito (Mid-Tweeter-Mid) layout.

Q Acoustics Concept 50 features a large bass port and is supplied with foam bungs for use in smaller rooms or places where having speakers far from the rear wall isn’t practical. However, while these loudspeakers are relatively svelte by typical floorstander norms (standing just a shade over one metre tall and just 32cm wide), they still need a medium to large size room to shine; place them up against the wall in a box room, and the bass will dominate. However, with the bungs in place, even a foot or so from the rear wall gives a good balance. 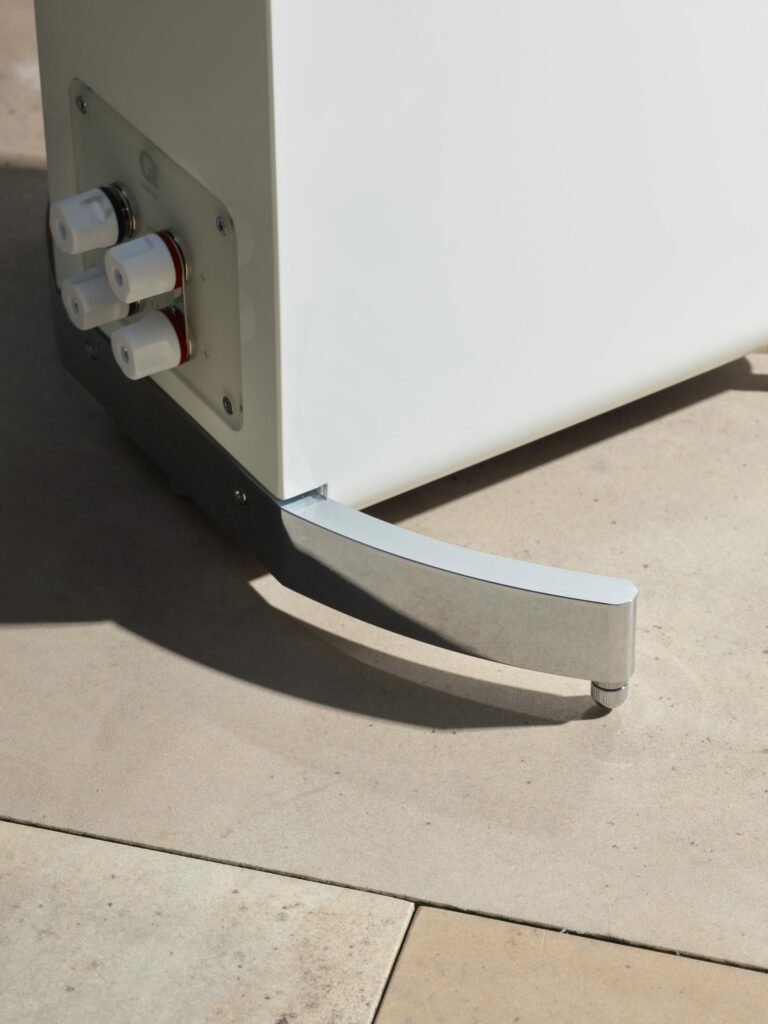 A thin, 23kg cabinet should be the stuff of tilt-test nightmares, but the Q Acoustics Concept 50 includes an outrigger to stabilise the speaker. In truth, I’m a little conflicted about the outrigger’s design; to its great credit, its rear brushed alloy bow shape is elegant and a lot less aesthetically gnarled than the usual ‘one extended arm per corner’ arrangement. The whole base also has deliberate ‘play’ factored in from that sprung isolation platform, and that makes it feel less rigid than most towers, but think of it like a mini Townshend platform. On the other hand, it does look a bit like it’s sitting on its tail, and the rear arms are longer than most. That all being said, I guarantee few people will notice this after about a day, and sitting just above the rear outrigger is a small bi-wire panel.

Like other Q Acoustics models, the Concept 50 is not a difficult loudspeaker to drive, although it’s probably neither the first choice of two-watt triode fans nor those wanting kilowatt power to drive an in-room PA system. The choice of electronic partners is more quality than quantity, and it found safe havens in the arms of both Hegel and Primare integrated amplifiers. I’ve heard of the Concept 50s also sounding good on the end of similarly mid-range, mid‑powered, great-sounding amps, albeit often ones with a little more ‘zing’ to them. The review pair arrived with plenty of miles on the odometer so any running in happened long before I received them.

I must admit to some initial confusion here. Because I try to avoid too much fact-finding about the marketing of a product while listening, I thought Concept 50 was the replacement for the flagship Concept 500 rather than the top model in a new mid-priced product line. Which meant my initial assessment was thinking this was a £3,600 loudspeaker, not a £1,999 loudspeaker. What’s more, as I was extremely impressed by its performance as a £3,600 loudspeaker and potentially putting at or near the top of the pile for floorstanding loudspeakers at around £3,500–£4,000, when I discovered they cost half as much as I expected, ‘extremely impressed’ doesn’t begin even to cut it. 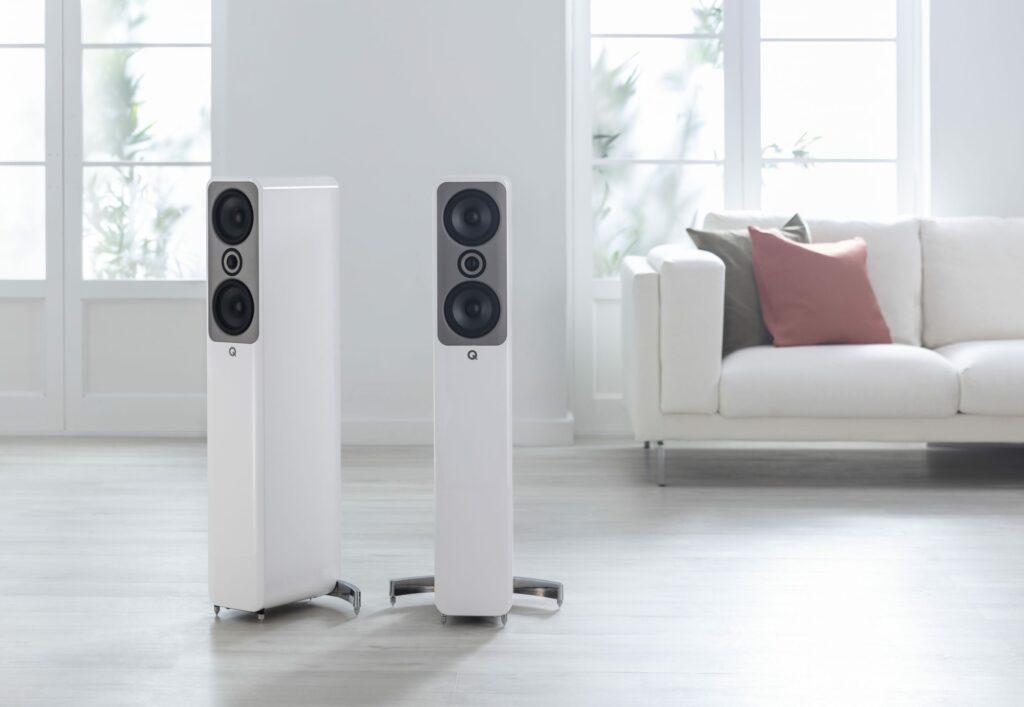 The Q Acoustics Concept 50 may not look like a traditional pair of British loudspeakers, but they sure sound like them. There’s a size, weight, and richness of tone to these loudspeakers that belies their size; shut your eyes, and there’s a far wider baffle to each loudspeaker pointing at you. This is both alluring and pin-sharp precise, with instruments easy to pick out within an orchestra or string quartet. This last was especially notable; on ‘Entr’acte’ from Caroline Shaw’s Orange played by the Attacca Quartet [Nonesuch], there’s a palpable sense of musicians at play, and while this isn’t an audiophile-grade recording per se, that dimensionality and detail help add to these lively and impassioned pieces of, er, gardening set to music.

Its strongest suit is midrange; instruments and voices in this all-important register are extremely lithe, liquid and open sounding. ‘Keef’ Richards’ spoken ‘arpeggio/archipelago’ quip at the start of ‘Love In Vain’ [The Rolling Stones, Stripped, Virgin] is just far enough stage left that it can sound ‘phasey’, but here is clear and while diction is not his strong point, the Q Acoustics Concept 50 easily transcribes his distinctive drawl. 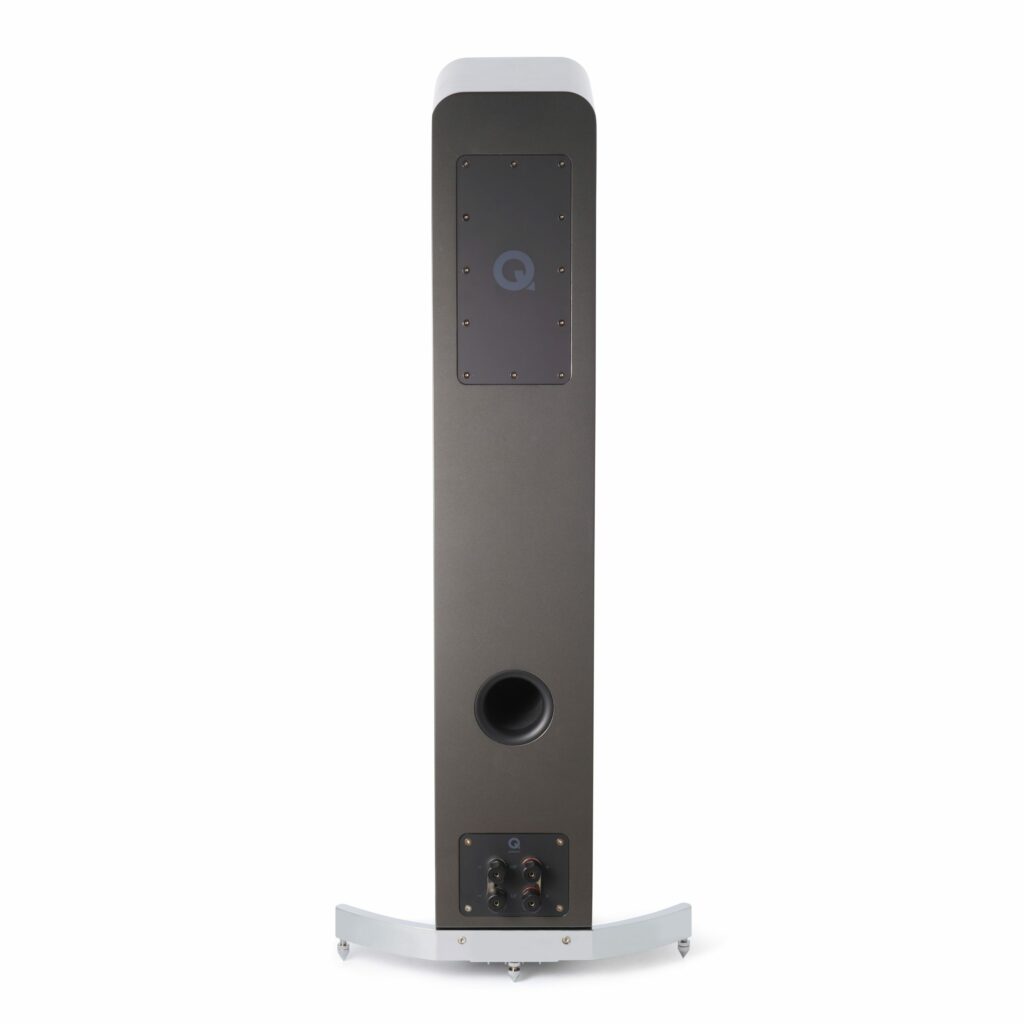 That earlier point about amps with some ‘zing’ is that the top-end is also a little ‘classic BBC’ like, soft and gentle… and very much at odds with the current zeitgeist among speaker designers. However, this more balanced approach reappears as you climb further up the high-end ladder, and the Q Acoustics Concept 50 is not rolled off, and it doesn’t fall down that dull BBC-speaker ‘pipe and slippers’ rabbit hole. Instead, that gentle extension into the upper registers is ultimately more satisfying and results in longer listening sessions. However, you might need some transitional steps; hence some put a bit of zing into that treble from the amplifier.

I’m always very mindful of ports as they can often ‘chuff’ along with the music. My go-to test here is Trentemøller’s ‘Chameleon’ [The Last Resort, Poker Flat]; the fast, deep, almost square-wave low-end notes do not exist outside of synthesisers but give a perfect snapshot of how the bass performs, especially through a port. The Q Acoustics Concept 50 is a clever design, as it reduces that port chuffing to a bare minimum, and only when playing very loud do these speaker-challenging low notes begin to choke up the port. This is a sign of an exceptionally well-engineered loudspeaker; there are reflex-ported loudspeakers that cost ten, even twenty times that of Concept 50 and don’t have the same port-chuffing control. There’s a demonstrator’s trick played here… if you hear lots of organ music to highlight deep bass but never, ever hear anything with a fast, synth bass line, they might be hiding something. But that’s not something Concept 50 has to hide; unless you want to play a lot of loud, fast house and electronica (where the listening room is likely to be as much of a problem as the loudspeakers), Concept 50 passes with flying colours.

That last sentence is important as it describes the Q Acoustics Concept 50 perfectly; it passes every test with flying colours. It’s a £2,000 loudspeaker that sounds almost like a £4,000 loudspeaker. The design isn’t just ‘another box’ but nor are the innovations that go into the design merely there for their own sakes. A loudspeaker that is easy to drive and possessed of a classic sound yet isn’t so ‘classic’ as to be boring and isn’t undemanding of electronics in quality terms. With Concept 50, Q Acoustics more than earns a place at audio’s top table.