finite elemente was the go-to stand-maker for the European high-end cognoscenti for many years. Then it had what can best be described as ‘a bit of a wilderness period’. But now, with the pagode Mk II MR (short for ‘Master Reference’), the company is back in rack! We looked at three models from the new line; the HD02 MR Edition (designed for electronics), the HD02 MR Edition Heavy Duty (ideal for high to very high mass turntables, and the occasional preamp made of solid granite) and the HD09 MR Edition L amplifier platform. 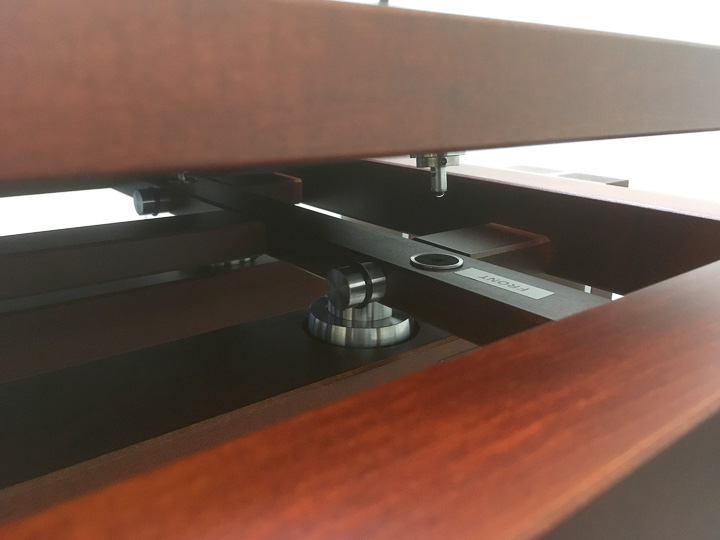 But let’s stay with the long-standing original pagode by way of comparison. It featured solid Canadian maple frames (it still does) with two vertical pillars per side (ditto) made of high-grade aluminium (see maple and pillars). The distinction between MR (Master Refererence) and MR Edition was – and is – that the latter has additional solid maple wood square long batons that provide further acoustical and mechanical damping of the aluminium pillars.

The first big design change for the Mk II generation was the choice of material for the platforms (shelves). Originally, these shelves were maple MDF veneered in maple with five little stainless-steel spikes that fitted the respective stainless steel cups within the tensioning frame at each level of the stand. Centering and stability was attempted via soft foam circular rings which kept the platform centered within the frame, although it could be moved laterally with a bit more force (soft foam the only obstacle). Lots of people used the original shelves without the soft foam centering rings as the sound improved… In short, shelves were very solid, very heavy and very dead in terms of overall damping. Those characteristics were offset by appropriate tuning of the proprietary resonators which, like tuning forks stick out of each side of inner bracing of each tensioning frame.

Luis Fernandes, Alpha and Omega of finite elemente, took note of this popular tweak to the original platform, and in the second edition, the fundamental material shelf supporting surfaces (platforms) are now made of wood-based honeycomb structure wrapped into the same Canadian maple veneer. There are also optional Carbon platforms, made out of carbon-fibre honeycomb, wrapped (more accurately, ‘veneered’) into a proper carbon-fibre panelling on all sides. Instead of five little sharp spikes on the underside of each platform, we now have five finely threaded shafts ending up with something looking almost like a tiny ball bearing. This end of the shaft sits precisely in a centre hole accurately machined into the bottom of the stainless-steel cup. There’s no more need for any degree of centering as the shelf is firmly positioned where it needs to be. This also means no need for foam rings. The same arrangement on the underside of the platforms applies both on standard and carbon shelves, and the resonators on all shelves have been suitably re-tuned and altered in their behaviour for the new materials used and their respective behaviour in use under various loads.

The other big change is the coupling of the whole structure with the floor. All Mk I products had long and sharp 8mm tapered steel spikes. Stands were supplied with steel circular cups for those who did not wish to pierce holes in their carpets or wooden floors. Needless to say, using spikes on their own coupled the stand structure to the boundary much better and this resulted with a more coherent and clean sound overall.

In the new edition, these sharp spikes and cups have been replaced with single-piece, CNC machined ‘tiptoe’ shaped feet that are integral with what would be a supporting cup. And, even more importantly they are now much easier to adjust (by simple rotation) as there are allen key holes around the circumference of the wide end of each foot, albeit without being possible to lock the foot rigidly once adjusted (for now, at least; Luis is working on a way to lock the feet in place without sacrificing performance in the process).

Maybe it’s the use of carbon-fibre, but comparison between the two approaches (in my mind, at least) inevitably brings up comparisons with conceptual designs of racing and F1 cars and GP bikes in many ways… the main trick is, of course, how to exploit all the (theoretical) benefits of the Mk I design approach without sacrificing sound quality and, if possible, gaining in terms of improved and noticeably superior sonic performance.

Sonically, these seemingly minor changes add up to a very big change in performance. The Mk I was a very damped, high mass solution for the supporting surfaces combined with the quick release and dispersion (disappearance) of any energy or resonances stored in the stand through a small contact area between the sharp tip of the spike and the floor/carpet. The effect would have been reduced if the spike supporting cups were used, but most of the behavioural mode would remain present.

Mk II products have now turned this ‘upside down’. Now we have a quick reacting, fast transient response, low mass structure (of even higher degree of rigidity, thanks to the chosen materials) supporting the components combined with a more damped and less ‘sharp’ (both sonically and physically) manner of decoupling each tensioning frame from the main structure of the stand, as well as the complete stand from the surface upon which it sits.

So, how does the new Mk II product sound compared to the Mk I? The original was remarkably consistent; whatever rested upon it delivered a resolving, dynamic and extremely musically satisfying performance. So, it comes as no small relief to find that not only does the new version continue down the path trodden by the original, but significantly improves sonically on that performance in all ways and without compromises. Regardless of music or equipment, there was much greater dynamic range of the music, an even higher degree of musical transparency and resolution without any amusical by-products as a result of the improved overall resolution. Also, the overall level of coloration throughout the frequency response has been reduced and all types of music sound more natural and even less forced than before; the extraction of detail from the recording has improved dramatically, probably thanks to the lightweight rigidity given by the honeycomb structure of the shelf material. In addition, all three dimensions of the soundstage have also benefitted dramatically as a cumulative positive consequence of all aforementioned improvements. Depth and height are much easier ‘tactile and palpable’ with spatial layering requiring much less mental effort to position instruments and artists during listening.

The implementation of optional (and considerably more expensive) carbon fibre shelves and platforms make all the above perceived improvements take several steps further forward, although standard shelves already made the comparison between the Mk I and Mk II products very clear in terms of what happens and what the fundamental degree of improvement was to be established. Each successive platform shows an almost exponential improvement of the sound in all areas! 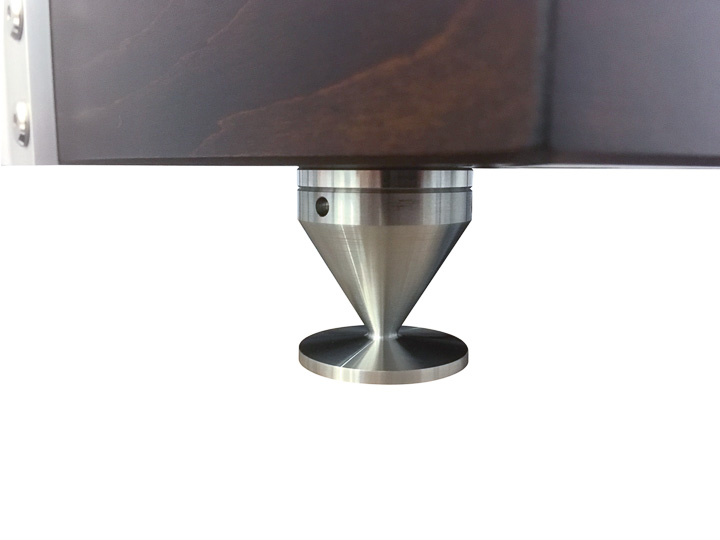 The finite elemente table never lost its way, even when it went away. It was the right platform for that effortless, more statesman-like audio presentation, and the perfect foundation for truly top-end systems that didn’t just rely on impressive audio fireworks. In moving to the new Mk II version – whether using the standard or particularly when moving up to the carbon shelves/platforms – pagode MR has at once extracted more finesse and more excitement from the best in audio, without compromising the sound in the process, and proves a very tough challenger to beat,… especially as it comes with a very fine upgrade path too.