I have been using Stillpoints as a fundamental part of my home system now for around a decade. I say ‘fundamental’ because I think that sums up the nature of their application and musical effectiveness rather well. From the ESS rack through the Ultra Mini, (the smallest commercial filter), to the Apertures (Stillpoints acoustic-treatment panels), I have found that Stillpoints products bring their considerable influences to bear right at the heart of the music, and this is where we need it most.

Up until recently the resonance control filters came in three guises. The Ultra Mini, with attached base can be used with just about any electronics or small(ish) standmount loudspeaker. They don’t take up much room, but are deadly effective when it comes to liberating the music from within the system and improving articulation from top to bottom. Just slip some under your CD player to get a flavour of what they can do. I should add here that, if you like their effect, then that should be the first step in ‘floating’ the whole system because this is where they really pay off big-time, with a release of musical energy and dynamics that hints at where your system could go. Minis are a great introduction to the Stillpoints range of products that finds its ultimate expression in a fully fitted ESS rack, where the devices are layered upon each other to startling effect. 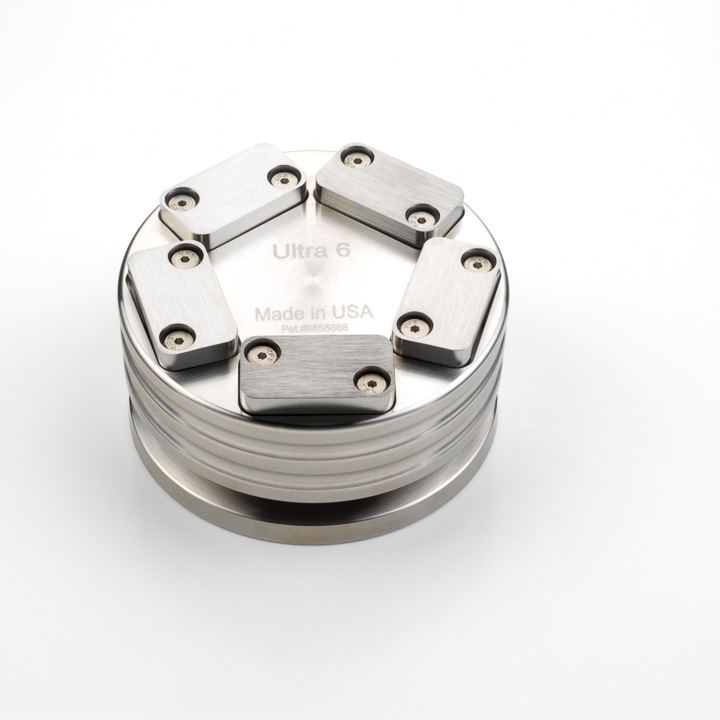 The Ultra SS is a two-piece filter housed within a stainless steel body that can be fitted as a direct threaded replacement for any foot that might be detachable… or just slotted beneath electronics, medium sized speakers, or their stands. Next up is the Ultra 5 which, as the name suggests, houses five of the same filters found in the Ultra SS. But here they are sandwiched between two substantial stainless steel pucks and invisible externally. I have used these under just about everything from hard discs to large loudspeakers. Again they can be fitted to just about any component (electronics or speakers) by using a set of thread converters that the company can supply. Up until now, if you wanted to support a high-end system from front to back or if you had an ESS rack, perhaps fitted with their steel crossbar system known as ‘The Grid’, these are the models you would employ to do the job.

The arrival of the Ultra 6 has changed matters considerably. These wear their filter devices externally in a 5:1 configuration. This is a beautifully made, sculptured steel billet that shows five Stillpoints technology pockets on the upper face and a single one – with a thread in the centre – on the opposing side. This is a necessity really as the Ultra 6, if used as a free-standing support and not screwed directly into The Grid, is going to require a base to stabilise it and to allow for independent levelling of each component. So, at a stroke it would appear that the Ultra 5 has assumed a new role within the system where it is now best suited to supporting speakers, preferably directly attached, and the the Ultra 6 has become the ultimate way of treating electronics to the Stillpoints effect.

If you are used to Ultra 5’s, the 6 is something of a revelation. Replacing four 5’s, located beneath a dCS Vivaldi transport, with three Ultra 6’s with bases brings all the usual benefits of speed, air, and incredibly detailed control of the minutiae of musical technique but with an improved sense of dynamism and movement. Tempos seem even more explicit and to me there seems an added sense of poise and musical space. By this I don’t mean that the soundstage necessarily opens wider but that the musicians appear to have more ‘time’ to express themselves. Phrasing is more precise and the interplay between instruments takes on a more delicious richness and regardless of the complexity, the music sounds notably more vivid. Never was this so boldly conveyed as when i listened to the darkly atmospheric Worrisome Heart CD by Melody Gardot [Verve]. I love her work and the more artistically introverted she becomes, the more I like to peel back the layers of that musical moodiness. This sparingly produced album is so textural and subtle that less well-sorted systems let it drift by in a rather dull palette of tonality. It seems that nothing much is happening, and this is where the Stillpoints come into play with a vengeance. When the tempos are as slow and introverted as this, the Ultra 6’s never drop a stitch and the darker, more velvety arrangements just draw you into the music. This is precisely what great systems must do. The ear is engaged with the very small and the superb focus and realisation of tempo become inseparable, but the 6’s certainly bring a change in perspectives and dimension, too. Its subtle, but listen carefully to the instrumentation and particularly the drums and there’s a tangible depth between them and it’s consistent as well. They get right into a recording and expose its nature and its content at a fundamental level. If you want to hear what the musicians are doing then the Ultra 6 is the best way to ‘treat’ a system that I have heard. 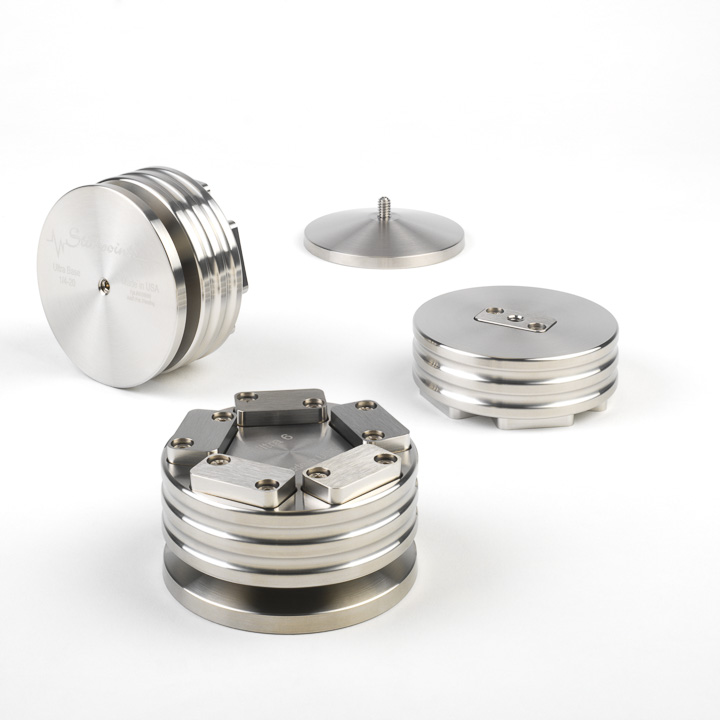 So, the Stillpoints suite of products seems more balanced and complete now and though they are hardly cheap, they are superbly built, never wear out and the further you delve into them and employ them within your system, the more intense their influence is. Obviously they are going to have varying levels of effect with equipment from different manufacturers and the possibilities are as endless as the myriad of combinations available. Personally I have found them completely invaluable in closing the gap between the system, the music, and the listener. Highly recommended.