Shipping speakers to the UK might once have seemed as rewarding as carting coals to Newcastle, but the times they are a changing. Not so long ago the number of established, imported loudspeaker brands could be counted on less than the fingers of one hand (and they all came from a single distributor): now, even many of those speakers that carry British names are built overseas and the floodgates seem to have finally opened.

One of those brands that struggled to fight a good fight in the past is Revel, part of the sprawling Harman empire that also encompasses the likes of Mark Levinson. Revel’s original Ultima range was remarkable for its performance and value, but more noted for its appearance, with wags remarking that the side panels on the Salon and Studio models looked like repurposed table-tops from 1970’s caravans (the stand-mounted, D’appolito-design Gem’s side-panels just looked like the clip-on trays that used to be found on high-chairs). Whether it was the looks or the fact that they had been shipped across the Atlantic, this was another excellent speaker range that failed to secure a substantial bridgehead on British shores. But that may be just about to change.

It wasn’t just the original Ultima series that featured a distinctive appearance. The more affordable Performas were equally ‘different’, equally impressive in performance terms – and equally unsuccessful. But softening attitudes to imported speakers are not the only thing that has changed. The Ultima 2s made a first, tentative step towards the more conventional, while the Performa 3s went beyond mainstream to really rather attractive, their slim baffles and boat backs offering a classy appearance that matched impeccable musical manners. They still suffer something of a price penalty when (visually) compared to high-value and aggressively priced domestic lines, but that too seems like it’s about to change, with the arrival of the new Concerta 2s, essentially cut-down versions of the Performas with simpler finish and styling.

The F35 reviewed here bears all the hallmarks of a standard, high-value floor-stander: slim, boat-backed enclosure – check; multiple bass/mid drivers in a two-and-a-half way topology – check; gloss black or white paint finishes – check; 90dB sensitivity, easy drive characteristics and bass that reaches down close to the all-important 50Hz mark – check; magnetic grilles – check. Oh, and a competitive price (£1,500/pr) – check. But as much as it might resemble other speakers on the market, there’s rather more here than meets the eye. For starters, it’s a Revel and that branding comes with a firm declaration of engineering intent. Boat-backed cabinets are hardly novel but the care and attention that’s gone into the F35 cabinet is unusual, especially at the price. It may have eschewed the curved top-cap and wood veneers of the Performa 3s, but the F35 still has plenty of tricks under its skin. The slotted and curved walls add stiffness to the cabinet (as well as contributing to the looks), but here an inner fibre-board layer adds further stiffness and damping. Along with the non-parallel 19mm thick MDF walls and figure-eight bracing it makes for a remarkably well-behaved enclosure, the perfect foundation for the carefully engineered, in-house drivers and large, flared ports.

Revel’s drivers have always been a core element in their designs and that’s one thing that doesn’t change at the bottom end of the range. The aluminium dome tweeter employs both an acoustic lens and a broad wave-guide to extend its high-frequencies and match its dispersion to the deep-anodised aluminium cone of the 133mm mid/bass driver. Those details are far from incidental, as they contribute directly to what makes the F35 not just unusual but also really rather special for the price. There might be other speakers that cost about the same and look pretty much the same but none that I’ve come across that can match the even, seamless integration and low-colouration that set these Revels apart from the crowd. About the only nit to pick here is the combination rubber feet/spike inserts: This speaker sounds good pretty much wherever you stand it, but it really responds to careful placement and that includes tuning attitude – something that the existing spikes seriously impede. Please Revel, make it an either/or option so that the spikes can be seated properly and torqued down.

Where so many compact floorstanders these days seem to strive for the biggest (and boomiest) bass they can generate from limited volume, the F35 comes at the problem from the other end, offering all of the clean, integrated delicacy and uncluttered detail of a great stand-mount – but underpinned by carefully executed bass extension that adds scale, weight, presence, and dimensionality without slowing progress, slurring rhythms, or adding an asteroid belt of colouration artefacts to obscure the view through the vital mid-bass. In truth, the Revels don’t go that low, but what matters is that they go low enough: low enough to add convincing body to vocals and warmth and complexity to instrumental harmonics, low enough to add shape to phrasing and pace to rhythmic surges: in short, low enough to satisfy but not so low as to get into trouble. Listen to Birdy’s brilliant cover of ‘Skinny Love’ [Birdy, Atlantic] and the F35s deliver both the distinctive character of her voice and the body and intent behind it, as well as a convincing sense of the scale, weight, and sonority of the piano. But what really impresses is the relationship between voice and instrument, the precocious teenager accompanying herself to impressive effect. Throw in studio effects and a band on a track like ‘1901’ and the F35s manage the increase in complexity, dynamic range, and space without fuss or confusion. You get full benefit from the deft production, full value from the arrangement. This ability to grow with the music, to do the intimate and delicate as easily as the more layered and energetic is a mark of the Revel’s well-behaved cabinet and low-colouration, its ability to deal with more energy, and more information without blurring or confusing proceedings. It also bodes well for future upgrades.

I started by listening to the F35s with an Arcam FMJ-A19, just the sort of moderately priced integrated amp you’d most likely find paired with a speaker of this type and price. But it wasn’t long before I’d graduated to an Icon Audio Stereo 60 tube integrated, an upshift the speakers embraced with remarkable enthusiasm. As good as they’d sounded with the little Arcam, offer them a richer diet and they lap it up, coming back for seconds. It had me wondering just how far you can push what is in reality one step up from a budget speaker. The answer is much, much further than you might think: Gryphon Diablo 300? No problem – bring it on. Getting just a little ridiculous, I started reaching for higher and higher end partnering pieces and if, hand on heart, I can’t say that the F35s delivered full value from the ARC Ref 10 line-stage and Berning QZs, nor can I complain about the results. This is an amazingly capable loudspeaker, its performance built on the core virtues of integration and low mechanical signature. Put more in and more comes out; it’s as simple as that. Sure, it never reaches right the way down, but it has more than enough bandwidth to deliver convincing performance on all but the biggest orchestral works in moderate sized rooms. More importantly, it doesn’t overdo or hype its low-frequencies, which is the key to its astonishing ability to grow with the partnering electronics.

The other thing the F35 gets spot on is its top to bottom balance. I’m sure the consistent driver materials help, but so too does the carefully judged top-end extension, with enough energy and detail to deliver satisfying air and locational cues, but not so much that the top-end sounds spotlit, bright, or harsh. The Revel’s musical range isn’t just seamlessly integrated, it’s satisfyingly rich of colour and tonal warmth to make for long-term listening pleasure. If you want to pick holes then you can look at the ultimate resolution available and the limited deep bass, but that’s to miss the point. All speakers are compromised and the F35 is no exception: it just chooses its compromises more successfully than the competition. If you want performance that lasts and satisfaction guaranteed, then the Revel Concentra F35 should be at the top of your shopping list. It looks like Revel might be about to get the attention (and hopefully the sales) that its high value, engineering led marketing model has always deserved. And it looks like customers shopping in the £1,500 price range are at serious risk of getting considerably more than they bargained for. Either way, this is one musically impressive package. 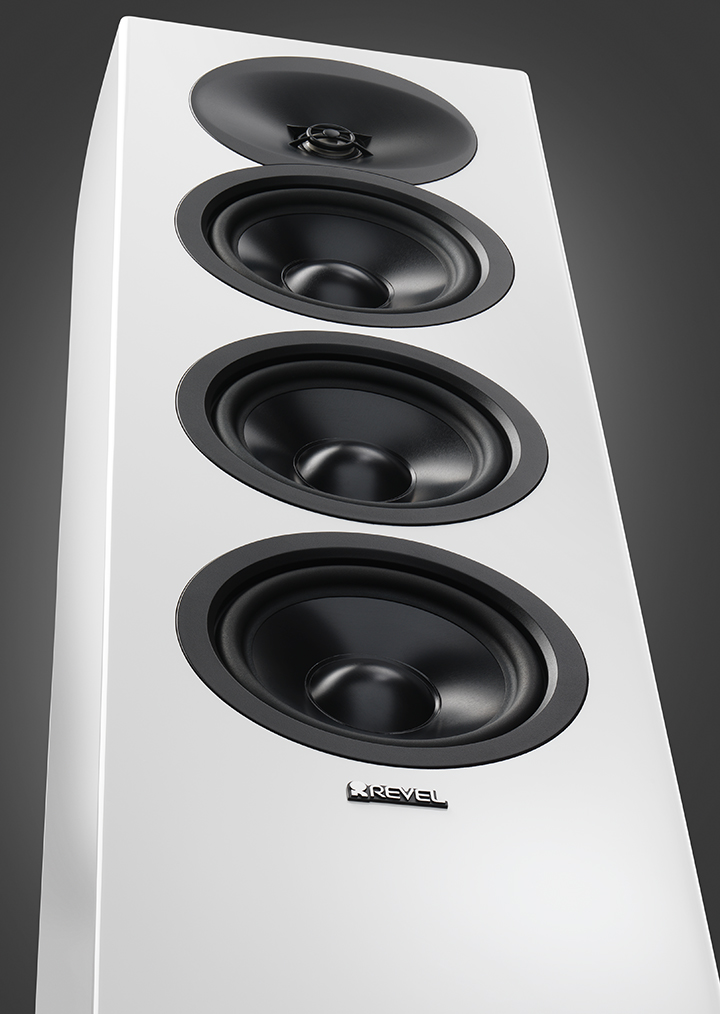