The Specialty/High End Audio sector of CES is struggling in Las Vegas. Although attendance in the main show is greater than ever, with more than 170,000 people at CES2017, the main audio event in the Venetian Tower is seemingly a forgotten part of the whole consumer electronics experience. This has been made worse this year by the CTA organisers moving many manufacturers to the main Las Vegas Convention Center under the somewhat nebulous banner of ‘high-resolution audio’. Those who stayed true to the Venetian experience were saying it was about ‘quality, not quantity’, but to some brands this was putting a brave face on a show that has been out-classed in every respect by Munich High-End, the Hong Kong Audio Show and more.

As a consequence, new product launches in the audio sector have moved from January to May, and this year’s CES shows just how big that change is. Despite this, there were some exciting new products seen for the first time, many of which will likely come to dominate the high-end market in 2017.

Burmester Audio should be one of the brands most likely to showcase its new products at Munich, but this year it launched the new B18 tower loudspeaker at Las Vegas. The B18 is a direct descendant of the popular B10 standmount loudspeaker (which was initially designed as a monitor for Dieter Burmester’s studio), and the €8,000 per pair B18 retains the same titanium ring radiator tweeter and coated carbon mid-bass unit, but adds an extra drive unit in a two-and-a-half way, rear ported design. Available in gloss black, gloss white, gloss dark and light walnut, and Macassar, this was one of the first products we saw at the show, and delivered an impressive sense of size and scale, and prodigious bass for a tower of this size. And, it looks excellent, too! 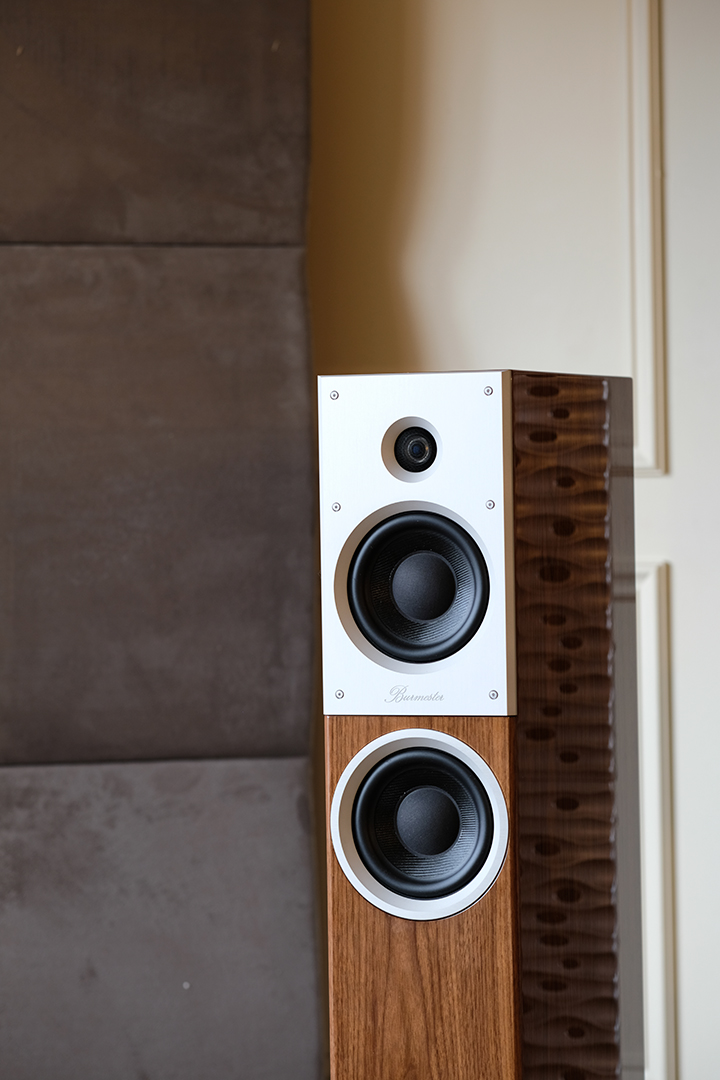 Constellation Audio launched a whole new range, called the Revelation Series. This line comprises Pictor preamplifier, Andromeda phono stage, and 250W stereo or 500W mono Taurus power amplifiers are designed to feature the sound quality of the Performance Series with the chassis design of the entry-point Inspiration line, and the products are priced accordingly at $18,000 for the line and phono, and $19,500 per power amplifier chassis. There is also a DC filter option. Andromeda now represents the brand’s cheapest phono stage, as it proved impossible to create a phono stage in the Inspiration line without sacrificing a tiny fraction of the audio quality in the process. Constellation also announced a $55,000 Centaur II 500 stereo amplifier in the Performance Series. Designed to deliver Centaur II Mono power in a stereo chassis, this does not replace the Centaur II, but offers a bit more oomph for those who need it, but cannot incorporate mono amps in their system. Constellation also announced a new black finish, and had a set of Inspiration equipment on static display. This will be available in all Constellation lines, and it delivers the same exceptional finish that the brand is famed for. This rich, dark, matt black makes it effectively impossible to photograph at a show, however! 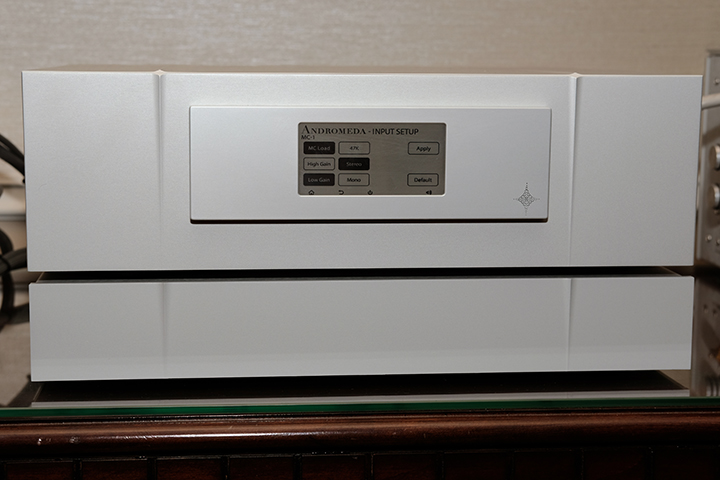 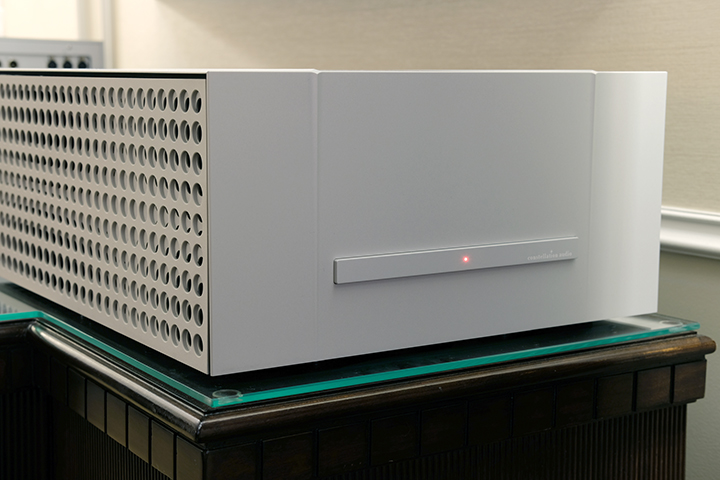 Constellation was making one of the nicest sounds of the day, and did so through a pair of Magico’s new-last-year M3 loudspeakers. Magico was also peppered throughout the show, with a particularly strong display through Soulution Audio electronics, culminating in the mighty Magico S7. This room was also used for the passive display of the new $28,000/pr S3 Mk II loudspeaker, and we expect this to be one of the most important loudspeakers of 2017. 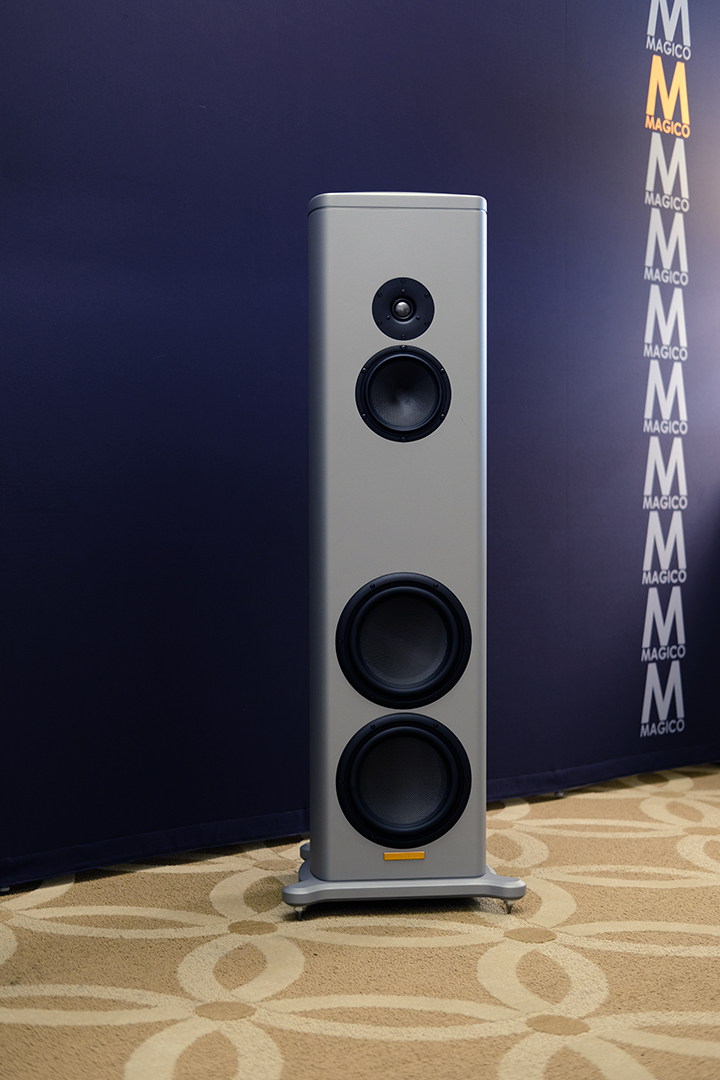 Raidho, alongside the impressive Aavik amplifiers (a pre and power amp set, with the rumour of monoblocks coming along later this year), Raidho was showing off its D-1.1 and D-4.1 loudspeakers. The latter is a tall, slim floorstanders capable of some seriously heavy lifting in the bass, dynamics, and impressive slam stakes, yet is also capable of great subtlety and finesse. This is well matched at the entry-level end by the two-and-a-half way Scansonic MB5 tower, which at $7,000 per pair delivers a lot of the resolution and detail of the larger Raidho models, albeit without the same degree of dynamic drive and endless scale capabilities. 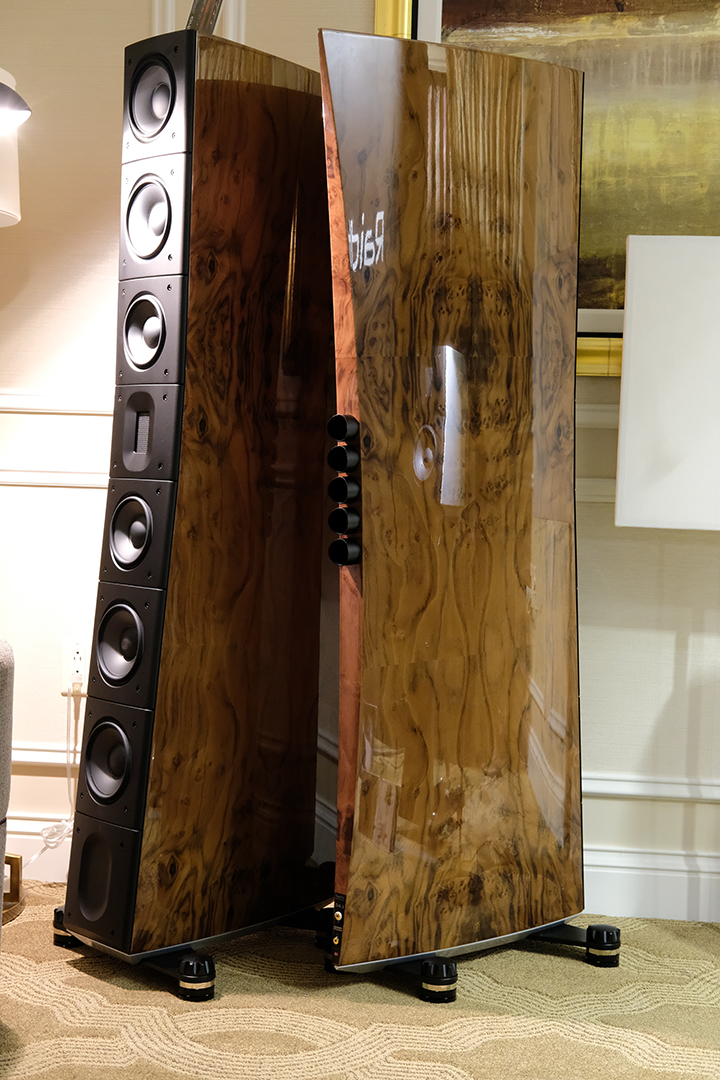 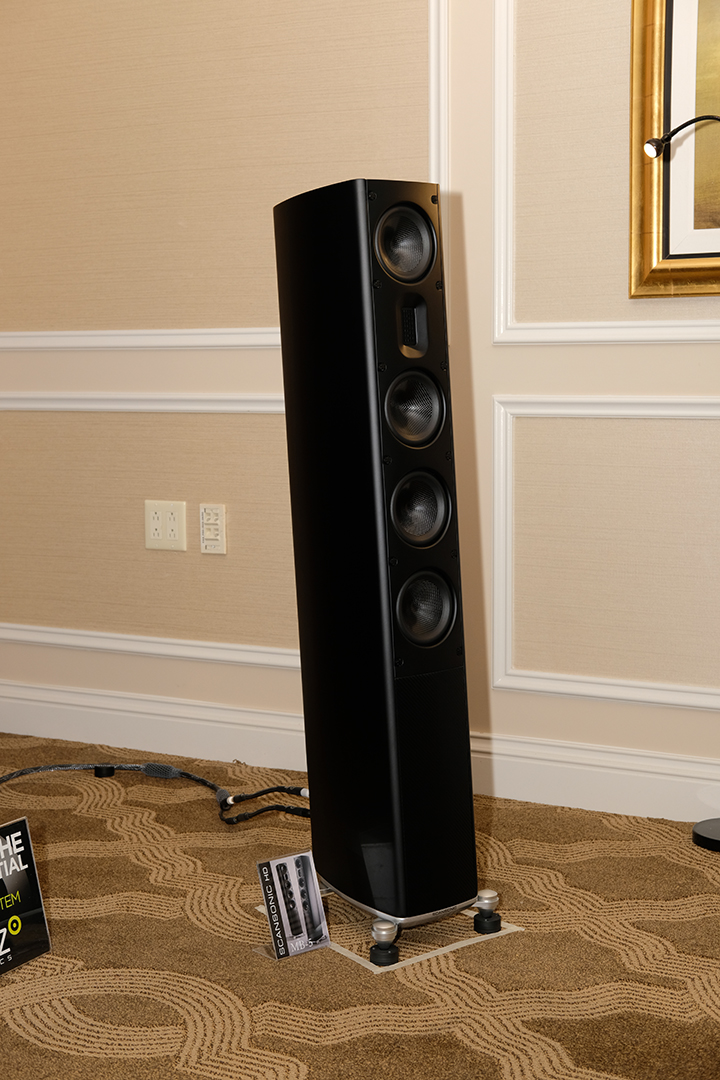 Crystal Cable announced a new line of cables that start where the company’s popular Absolute Dream end. Called the Ultimate Dream, and beginning with the power cord, the new top-end cable uses seven monocrystal conductors in place of the four used in the Absolute Dream (six silver conductors wrapped around a seventh silver-gold core). The new design is intended to reduce AC-bourn magnetic and electromagnetic distortion to a new low, and other cables in the Ultimate Dream line will be expected later in the year. Meanwhile, stablemate Siltech announced a new flagship Triple Crown power cord. This takes the same monocrystal structure (but utilising Siltech’s own developments and voicing) to extend the company no-compromise Triple Crown line of interconnects and loudspeaker cables. Expect to pay around €12,500 for a 1.5m Ultimate Dream, and around €13,500 for the Triple Crown; two cables from the same stable, different construction and sound, but alike in awesome! 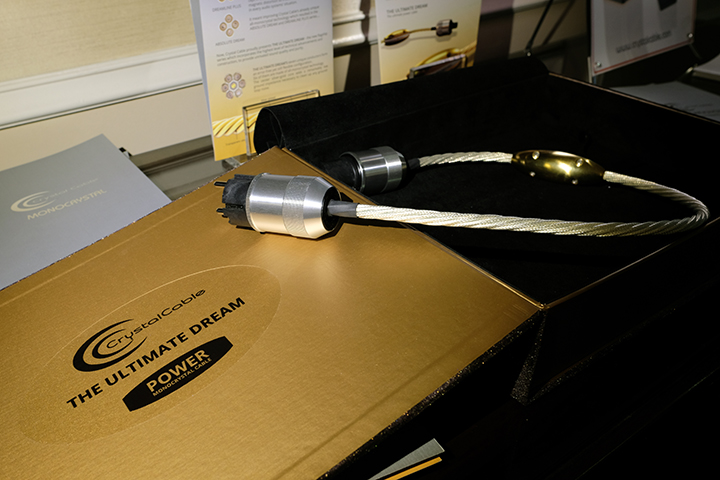 Staying with cables, Kimber Kable showed its three grades of Axios headphone cables, which are unique in allowing the cable to split to left and right earphones through weave and not using a Y-connector of any description. The company even turns the wood used for the outer barrels of the connectors, and has a tie-in with Sony (a first in audio) to produce upgraded cabling for its top MDR-Z1R high-res headphone, TA-Z1H headphone amp, and NW-WM1A Walkman system. Ray Kimber demonstrated this with IsoMike recordings to stunning effect.

Nordost has upped the USB ante in the great Las Vegas CES digital poker game with its new Valhalla 2 USB design. Unlike other USB designs, including those in the Nordost line, V2 uses a flat, twin axial geometry (with silver-plated copper dual monofilament conductors) in place of the usual twisted quad layout. This helps keep the amount of wire inside any given length of USB cable to a minimum and allows better isolation of +5V and Ground conductors. It also sports proprietary Holo:Plug connectors. The demonstration leaves people impressed, and we hope to look at a sample soon, too. 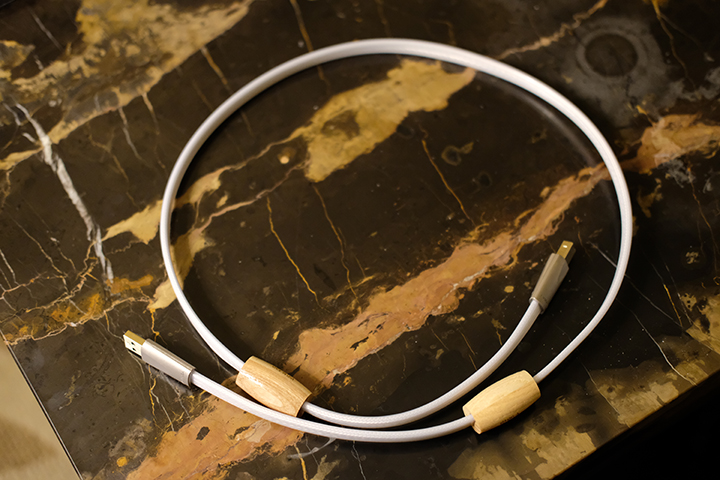 Over the Strip at the Mirage Hotel, one of the biggest – and certainly the largest – product launch this year wasn’t even at the show itself. We had an exclusive preview of the awesome Wilson Audio WAMM Master Chronosonic loudspeaker at the end of 2016 (https://hifiplus.com/articles/exclusive-first-listen-wilson-audio-specialties-wamm-master-chronosonic/), but this out-of-this world flagship loudspeaker remained in Utah, even if the company had a one-day meet-and-greet room at the Mirage. The WAMM – the distillation of everything the Wilson Audio team have learned about loudspeakers since the foundation of the company in the early 1980s – takes its place at the pinnacle of loudspeaker technology, but the sheer scale of the project means ‘you’ go to ‘it’, not ‘it’ comes to ‘you’! However, other Wilson Audio loudspeaker models were put to great effect in rooms around both the unofficial side-car show at the Mirage hotel, and over at the Venetian Tower itself.

Two Wilson using rooms at the Mirage were dCS and D’Agostino Master Audio Systems. UK digital experts dCS were showcasing the new Network Bridge; a device that brings high-grade digital streaming from online or local networks to existing DAC hardware. Being TIDAL-chummy, Spotify-friendly, and Roon Ready, the Network Bridge works to DSD128 or PCM at 24bit, 384kHz sampling, and includes a special integer down-sampling system for owners of legacy dCS DACs. For those with older dCS equipment, this is a gateway into streaming without having to upgrade at this time, while for those without dCS equipment, Network Bridge is a gateway to dCS. The Network Bridge played into a full dCS Vivaldi 2.0 stack, with a high-performance HRS platform system into the awesome Wilson Audio ALEXX floorstanders. 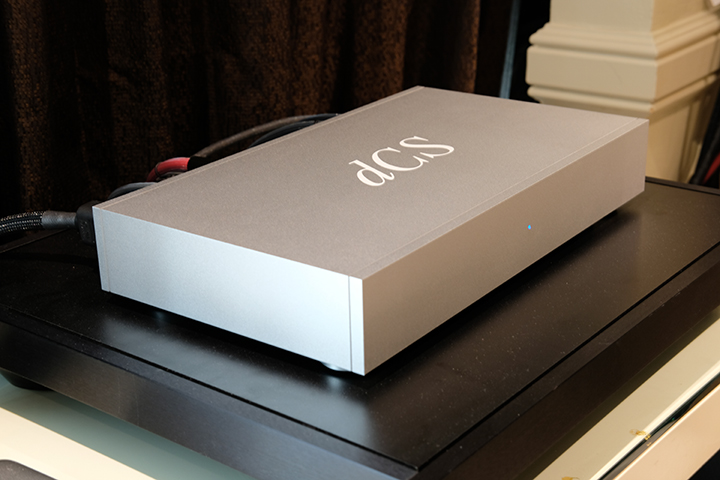 D’Agostino Master Audio systems had a smaller dCS front-end (a black-finished Rossini), and smaller Wilson Audio loudspeakers (elegant and very dark grey Duette Series Two), which matched the new rich black finish of the Progression Mono power amplifiers. The show for D’Agostino was marred by the news of the sudden passing of Dan D’Agostino’s son Bret (of BSC Audio), and our thoughts are with the D’Agostino family at this sad time 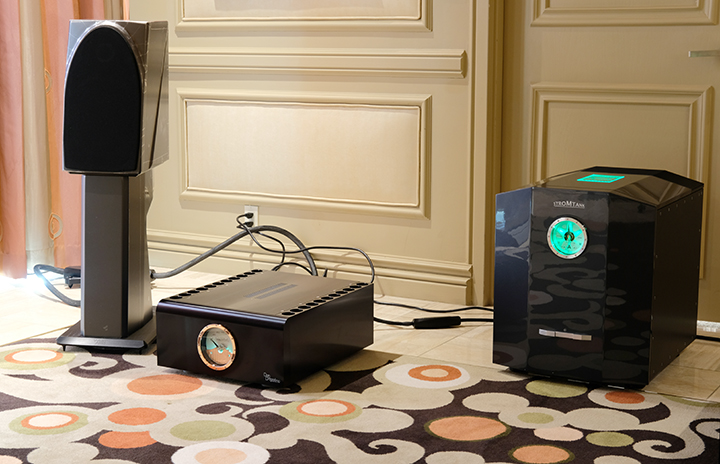