It’s a little strange that for all its importance in vinyl replay over its first 48 years as a manufacturer, Naim Audio has never made a turntable. Sure, there have been power supplies, phono stages, and even the Aro tonearm, and yes… a heavily modified turntable or two were bounced around the Salisbury-based company’s ‘skunkworks’. But a company that was one of the two defining vinyl brands for more than a generation of music lovers never made a turntable; until the Naim Audio Solstice turntable was released on the Summer Solstice of 2021.

Solstice is that first complete turntable from Naim Audio, a 500 turntable run special edition turn-key package launched – as befits the name – on the Summer Solstice (Naim’s Salisbury HQ is precisely 2.5 metric Druids from Stonehenge, and sometimes that rubs off in moments of uncontrollable tie-dye). This really is turn-key – the turntable is supplied with arm and cartridge fitted, and the power supply feeds both the turntable and a separate phono stage, all of which come in a series of quality boxes that give the product the look and feel of something special right from the moment of box-opening. The Naim Audio Solstice turntable is also supplied with an album from Naim’s own label, although that wasn’t supplied at the time of review. 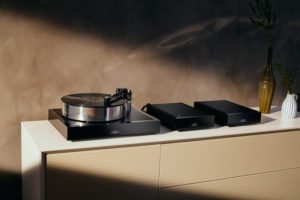 The paradox, however, is a lot of this case-candy is going to be experienced at first by the installer; Solstice is only sold through Naim’s most tippity-top dealers (which perhaps explains why it’s in white on black ‘Statement’ livery) who have to install it as part of the package. However, for the most part the installation process is refreshingly free from PhD grade installation demands; fitting the platter on the magnetically levitating bearing while keeping the belt in place has a bit of a knack to it, but otherwise it’s more about keeping the turntable level and making sure the cables are well-dressed and destressed. Your only options with Solstice out of the box are the choice of cable from the phono stage to the preamplifier and which sort of equipment stand to use.

Naim recommends its own Super Lumina cables, which were supplied, used, and proved a good match… natch. Also, one of the design criteria Naim imposed on the Solstice is that it should be able to fit on a Naim Fraim stand. This means while the platter sits relatively tall and the plinth relatively low (‘relative’ in this case comparing it to the brand of turntable that was at least once commonly associated with Naim systems!), the footprint of the turntable will not challenge standard sized equipment supports (it fitted on a Quadraspire without a problem) and the two off-board units (PSU and phono stage) could sit side-by-side on a single shelf.

In the past, turntables associated with Naim systems have tended to be suspended designs, so it might come as some surprise that its first complete turntable eschews a suspension and goes more down the high-mass route. Well… not quite. The use of a floating magnetic bearing is a sort of best of both worlds option, combining the temporal precision and quicksilver leading-edge definition of a bouncy deck with the more stentorian bass depth and dynamic range of the more ‘hewn from solid’ designs. While these are sweeping generalisations, they have more than a grain of truth behind them, and similarly the few floating bearing designs I’ve heard seem to have that ideal-option performance underpinning the sound. Still, those expecting half-turntable, half bouncy castle are likely to be surprised by Naim’s choice for the Solstice, and just as likely to be surprised by its performance.