You don’t get many loudspeakers that are made of plywood today. It’s more expensive than MDF and more challenging to make a cabinet out of; the BBC school likes it, however, and this is one reason why LS3/5As and their brethren retain the strong following that they do. But those speakers are built using sheet plywood assembled into a cabinet. Audel from Sicily takes a much more hardcore approach and machines the internal volume out of multiple sheets, then glues them together to form an immensely rigid enclosure with a very distinctive birch ply exterior.

I have seen a few examples of this over the years but rarely in a floorstander, such as the Malika Mk2, the largest model in Audel’s Classic range. While not precisely entry-level, the Malika Mk2 still sits below the more exotic Prestige range. Malika means queen in Arabic; there doesn’t appear to be a Malik in the Audel catalogue, not yet anyway. She stands nearly 110cm high on her dedicated base but is relatively slim and not too intrusive in the domestic setting as far as serious loudspeakers go.

The cabinet is not just unusual in its construction but also in its use of materials to create a complex internal shape within the box. You could say that it’s ribbed for extra pleasure because those ribs increase stiffness and break up reflections, helping to stop internal energy from hitting the back of the central drive unit. A cut-away of the cabinet interior on the site shows the IRS or internal rib system and horizontal braces and a stepped slope behind the tweeter, even the reflex port is created in machined ply. There are three apertures on the back of the box, all blocked with contrasting ebony veneered covers. The bottom one houses a single pair of speaker terminals, and the top has the crossover behind it. Still, the middle one’s function is less evident until maker Walter Cazan explains that it’s necessary to access the internal volume to place damping materials and dress the cables. The final piece of ebony veneer is on the front around the drive units, creating an attractive contrast to the blonde birch. 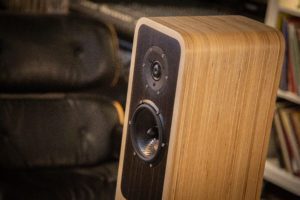 The drive units in this two-way reflex design mirror those seen in the Audel Magika bookshelf model; they consist of a 25mm tweeter and 146mm mid/bass driver. The latter is a SEAS unit with an injection moulded metal chassis and a ‘New Curv’ cone made of woven polypropylene; it has a bullet-shaped phase plug designed to reduce compression and increase long term power handling. It seems quite happy at higher levels, but the tweeter also limits this aspect. Here Cazan has chosen one of the increasingly popular ring radiator type high-frequency units where the traditional central dome is augmented by a ring that looks like a surround and produces energy. This one is made by SB Acoustics and called Satori TW29R-B, the 29 indicating the total diameter in millimetres.