I am always curious how a great piece of gear comes to be. Was it a singular vision of a talented engineer? Perhaps a group effort guided by an experienced team leader. In this case, it was indeed a visionary designer: Bascom H. King (hence the ‘BHK’ acronym). However, he had help in the form of a couple of long time industry veterans. Paul McGowan of PS Audio was looking to upgrade PS Audio’s amp and pre-amp offerings and was assisted in the effort by Arnie Nudell, of Infinity loudspeaker fame. Provided with an opportunity to create a signature set of electronics as a capstone to his illustrious career, Bascom King laboured alongside his long-time friends McGowan and Nudell and has succeeded brilliantly.

The BHK 250 stereo amplifier’s circuit design first appeared in 1979, when Bascom King created the HCA hybrid amp for Infinity. Harkening back to that original concept the BHK 250 has a tube input stage utilising a matched pair of Genalex Golden Lion 6922’s (a personal favorite of mine), allowing for no loss of musical information. The output uses only N-Channel MOSFETs to create a “near perfect balanced waveform without the degradation inherent in a complementary design” according to psaudio.com. Coming in at a hefty 38kg’s, the BHK 250 uses separate input and output power supplies keeping each part independent inside the single monolithic amplifier box design. PS Audio also offers the amp in monoblock form as the BHK 300. That version doubles the output current using only half of the impedance found in the BHK 250. Damping factor is also doubled in the mono amp, albeit at twice the price. 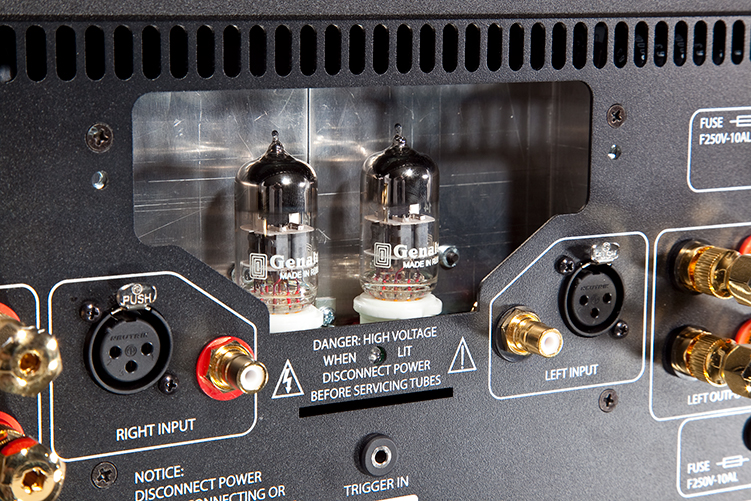 My first introduction to the BHK 250 was last year at Rocky Mountain Audio Fest in Denver. PS Audio’s room is always a must-hear treat, and the new amp was driving an imposing pair of YG Acoustics Sonja 1.3’s to great effect. The terrific musical presentation was made even more impressive when I found out the price of the amp was £8,000. This was very interesting as Bascom’s last collaboration was the creation of the extraordinary Constellation Audio Hercules amp, which costs more than ten times as much in its current version II guise! This more price aware approach was one of the design goals for the new PS Audio BHK lineup: to offer true world-class performance at a significant discount to the prodigious prices found in ultra high-end audio today. It took a few months but I was able to procure a BHK 250 for review along with the BHK Pre-amp. They would join my PS Audio DirectStream DSD DAC to join up with my Vandersteen Treo CT’s. Moving the BHK 250 onto its stand between the Treo CT’s I hooked up the AudioQuest CastleRock speaker cables and AudioQuest MacKenzie XLR interconnects. Burn-in time is recommended at 200 hours before critical listening should commence.

It’s a personal thing, but what I seek in an amplifier is ample power for the speakers being used with a solid grip on the low end. I would also like it to be as neutral as possible and allow the signal to pass through it as undisturbed as possible. In other words, I am not looking for it to add character. I do give extra consideration to a visceral sense of dimensionality, which is something I experienced early in my listening when I played ‘Take Five (Take another Five)’ from Grover Washington Jr’s SACD Prime Cuts [Sony Music], played on the Oppo 105D. This creative version of the jazz classic offered space and dimensionality. The depth of the soundstage was breathtaking. Spatial cues were present in abundance. In the centre of it all were the pure saxophone tones of the master, Grover Washington Jr. It was a clinic on musicality and a joy to experience. While I was enjoying the rest of the SACD, I came over all alpha-nerd and perused the parts list of the BHK 250. PRP Resistors matched up with film and foil Rel Caps all hand soldered through the circuit board without surface mount components. An approach found primarily on gear running well beyond £10,000. Sonic quality with sound (no pun intended) value. The BHK 250 was ticking many of my ‘need to have’ audio boxes.

Moving on to something more intimate I selected the SACD of Nick Drake, A Treasury [Universal – Island Records]. ‘River Man’ is a haunting guitar and strings melody with deceptively ‘simple’ chord changes. Once again, the character of the dimensionality of the presentation created an in-the-room sense. The violins’ tonality had that lovely blend of pure sound married with the physicality of bow on strings. Finger work on the guitar was sure and crisp. Drake’s vocals were centred as they should be, conveying his haunting fragility. This is where one really begins to appreciate the tube input and the capabilities of the 6922’s to preserve the sense of body and wholeness of the recording. In fact, I attribute these qualities not only to the valves chosen for the design, but also to King’s decision to use independent power supplies for the amp’s input and output stages. 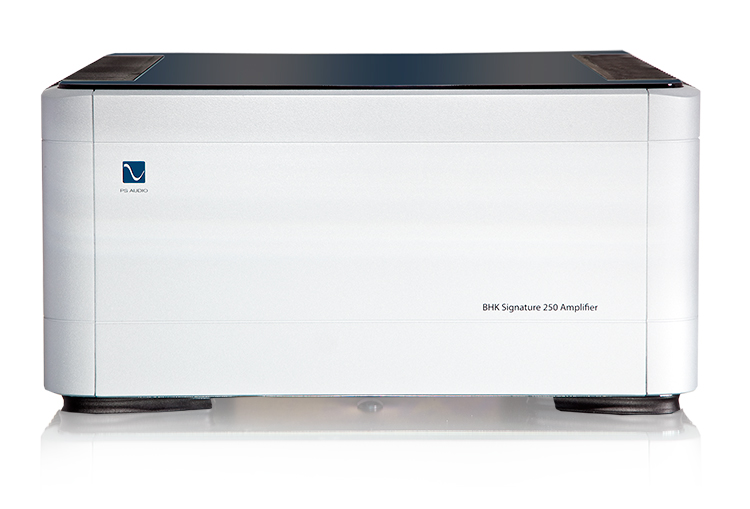 Given that we have valves in the amp that means you can tube-roll to tailor your sound. Swapping tubes is very easy with the BHK 250. Simply loosen the two Philips head screws holding the back plate covering the tubes and replace the installed 6922’s with any 6 or 7 series dual triode variant. Make sure to follow the steps in the manual to avoid damage to the amp or the tubes. I had a matched pair of broken-in Tungsram PCC88’s that have been commented on favorably in the PS Audio forums on the manufacturer’s website. My experience with these tubes showed an increase in midrange focus and some extended treble beyond the Genalex 6922’s. After installing the Tungsram’s it was time to return to more listening.

I recently received a copy of Pink Floyd’s Dark Side of the Moon on 180-gram vinyl [Pink Floyd Records]. Placing it on my VPI Scout 1.1, with its Dynavector 10X5 cartridge, and ALO Audio phono stage, I sat down to enjoy an all-time great. First impressions were black as in zero background noise during the opening of ‘Breathe (In the Air)’. The clock and chimes came from nowhere to spread out across the room. The heartbeat reverberated from the front to the back of the room with solid force. Roger Waters’ bass notes were solid and deep, but well controlled. It was an exceptional delivery – one that led to my playing the entire record and letting out my inner hipster as I got up and turned over the record half way through. Actually, in my mind, vinyl never left: it has always been a great way to experience music. Paired with the BHK 250, I could enjoy the best of analogue in all its organic three-dimensional glory. The nuance of Dave Gilmour’s guitar work was on full display. It was the best I had ever experienced this long time classic.

Bascom King and PS Audio’s stated goal when designing the BHK 250 (and its brothers the BHK 300 Mono’s) was to create one of the top five amplifiers in the world and to spare no expense while doing it. Yet they also strove to make them much more affordable than the statement amps found throughout high-end audio. On the PS Audio website page for the BHK 250 and 300 amps under the “Want more product details” tab are nearly an hour and a half of video featuring Paul, Arnie, and – of course – Bascom describing in detail their goals and aspirations for the project. This extraordinary level of manufacturer transparency gives the prospective owner both a high level of understanding and confidence in the product they are purchasing. Bascom, Paul, and Arnie’s combined 150 years of audio excellence has led to a design of classic physical beauty and sonic excellence that easily achieves the goal of competing with über-level amplifiers, but at a fraction of the retail price. As audiophiles, we sometimes fall into the ‘price equals performance’ trap. We fear being the emperor with no clothes when our friends ask how much we paid and it was, gasp! LESS than what flagship gear is supposed to cost. Naturally it must not be that good. This amp is that that rare Holy Grail whose sensible price belies its astounding performance. Hand built in America, it may well be your final amplifier purchase. 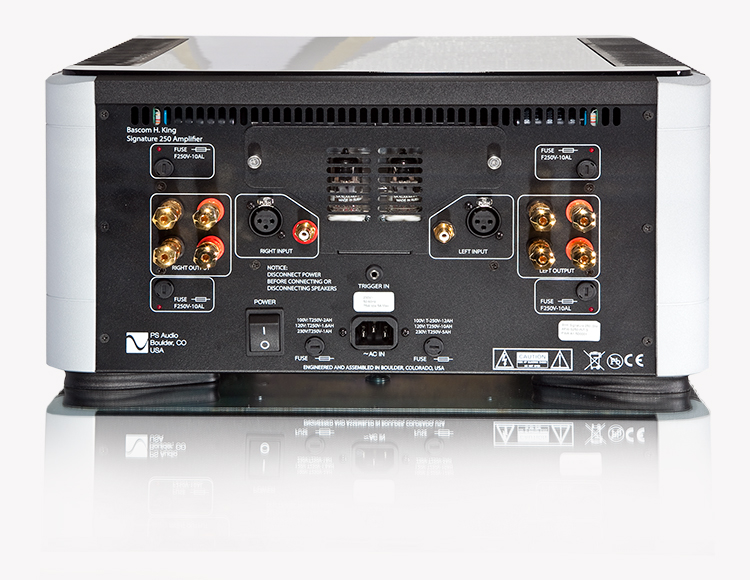