This Cyrus has been a long time coming. When Cyrus launched its flagship X300 power amplifiers, I recall mentioning that the cast alloy case – one that has adorned virtually all Cyrus products since the year dot – was not perhaps shiny enough for a product with high end aspirations. But that was around five years ago; the company has since changed hands, launched the Lyric one box system, and now, finally, come up with a new case. It’s still a half width design in the Cyrus style, but it has a shiny black fascia, big knobs, and a clamshell steel chassis. It looks great, especially when the bright white LEDs illuminate the input and volume level. It doesn’t look quite as robust as its forebears, but it’s a heck of a lot slicker, and feature rich to boot. In essence an integrated amplifier, the Cyrus One has four line level inputs, an MM phono stage, and a serious headphone output. There is also an aptX standard Bluetooth receiver: aptX, you may recall, being the best quality Bluetooth standard available and notably better sounding than the standard variety. Oh, and the Cyrus One is remote controllable, although the card-sized handset is so small that it will escape into the sofa at the first opportunity. A more attractive and less easy to lose alternative showed up halfway through the review in the form of an App for iOS or Android devices that offers the same volume and input functions as the credit card remote. This uses the Bluetooth receiver to connect with your tablet or phone; cunning, and no pairing required either.

The headphone amplifier is described as being a Class AB type with the ability to “drive almost all headphones” according to the blurb. Connections include both preamplifier outputs and AV direct, the latter effectively acting as a power amp input for either surround duties or in a bi-amping situation with another One. Despite the size, there are two sets of speaker terminals per channel on the back of this amp. This somewhat unusual feature is one that Cyrus engineer Chris Clifton says is important for their customer base.

Cyrus has been experimenting with Class D amplification for some time (both in standalone power amps like the Stereo 200, and in its Lyric series), which explains the One’s high specified output power (100 Watts/6 Ohms) in relation to the size and price. There are many that suspect the EU will do its best (worst) to outlaw low-efficiency linear power supplies in audio electronics in the future, which will make the switching power supplies associated with Class D the only option for those wanting to sell into the single market. Marantz recently launched a reference level amplifier, PM-10, that it describes as having an “analogue switched-mode power supply” but this is nonetheless a Class D design, a first for that brand too. Something is afoot, and let’s hope it can be made to work. In this instance, the power supply is actually linear, there’s a conventional power transformer in the middle of the box. Chris also mentioned the SID or Speaker Impedance Detection system that Cyrus has used to make the One compatible with a wide variety of loudspeakers. One reason why Class D has yet to be widely used in amplifiers is that it is very sensitive to impedance, the frequency response of the amplifier varies with speaker impedance (which itself is not constant), so some speakers will work beautifully but others sound pretty painful, especially at high frequencies. SID measures the 18kHz impedance of the combined loudspeaker and cable at turn on and adjusts its output to produce an overall response that doesn’t vary with frequency.

I tried the Cyrus One with two pairs of PMC speakers that are currently under assessment, the twenty5.22 standmount and twenty5.23 floorstanding loudspeaker. They have slightly different characters with the standmount being a bit faster than the relatively relaxed floorstander. With the former this amplifier sounded forward and bright and was not a happy match, but in many respects it worked nicely with the twenty5.23, so long, that was, as I selected a reasonably warm sounding source (a Mytek Brooklyn DAC was not a good choice while an AURALiC ARIES Mini and a Primare DAC30 proved happier companions). I also tried a Rega Planar 2 and Carbon MM cartridge that produced a wide, solid, and dynamic sound with good leading edge definition and quiet backgrounds. All in all a terrific result for what is a very modest cartridge.

With digital sources, there is plenty of speed and sparkle, and no shortage of filigree detail that’s good for resolving reverb tails. Leading edges are very much a strong-point, which translates to a strong sense of timing, but a presentation that is a little ‘edge of seat’. And this with a speaker that had seemed pretty relaxed, yet is obviously capable of delivering detail. I had a Rega Elex-R on hand for comparison. The Elex-R costs £200 more, but the extra depth, atmosphere, and effortlessness it delivers make it an easier amp to enjoy. But speaker matching is always the key with amplifiers, and while Cyrus has its impedance matching system, that doesn’t necessarily equate to total tonal balancing. 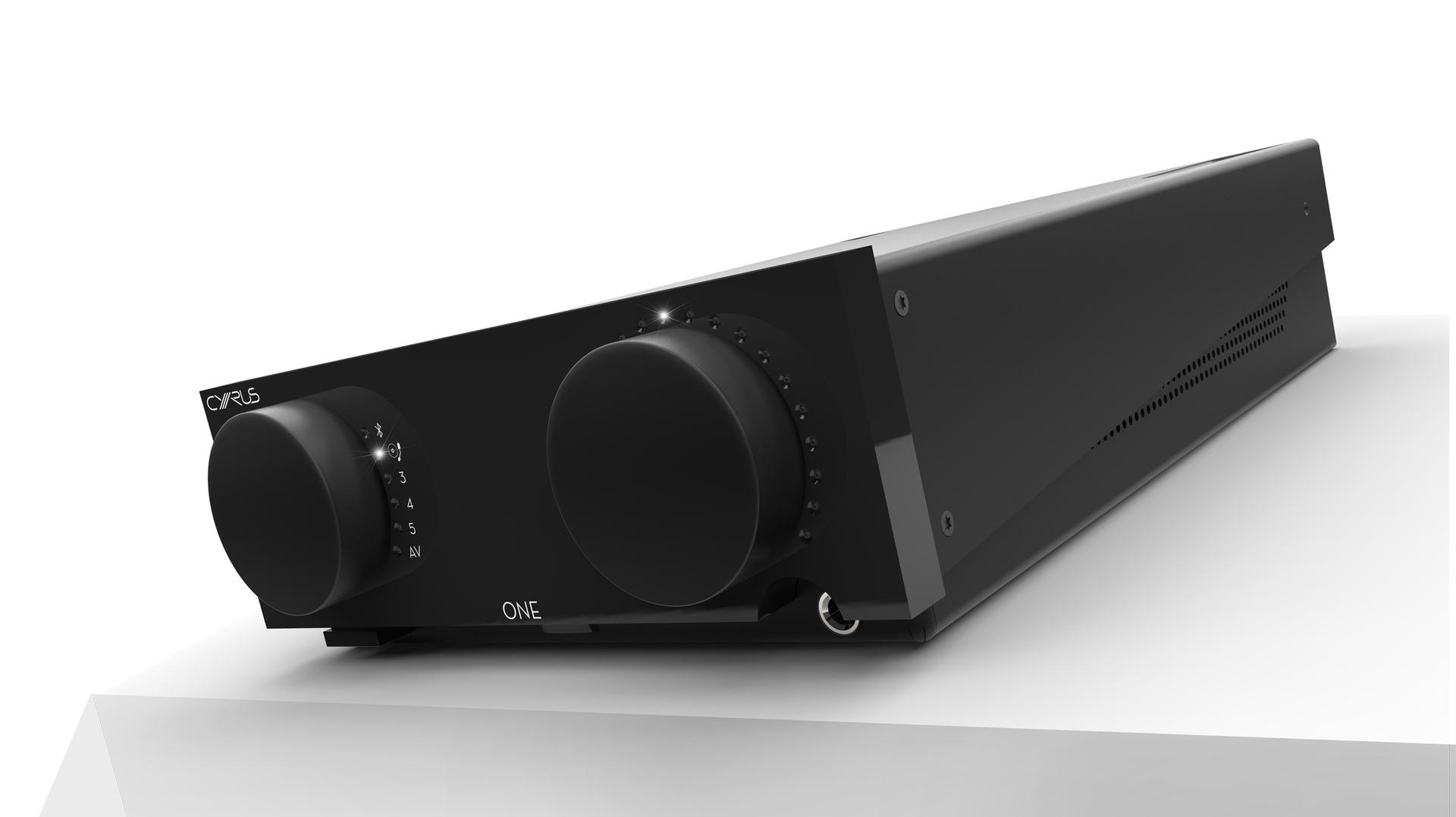 On the Talking Heads’ ‘Crosseyed and Painless’ [Remain in Light, Sire] the One comes across with juicy bass and ‘get your freak on’ timing that proved hard to sit still to. David Byrne’s voice was also very clear,  and it was possible to hear exactly what he was singing thanks to the transparency and the detail that the One delivers. When Joni Mitchell’s sings ‘The Man I Love’ [Gershwin’s World, Herbie Hancock, Verve], there is plenty of warmth and weight in the bass, albeit not as much control as one might expect from a 100 Watt design: I tried pulling the speakers out a little further, but that didn’t change matters significantly. Another speaker was clearly needed. This took the form of ATC’s SCM11 standmount; not the easiest of loads with its sealed box configuration, but one that is extremely tight in the bass.

At this point I updated the amp with a firmware upgrade that allows it to be used with the Cyrus One app and refines the speaker impedance matching system. I don’t know whether it was this or the fact that the amplifier had been on for a few more hours, but it started to sound rather better thereafter.

With the ATCs the amplifier’s immediacy was obvious, but it didn’t sound bright, and the bass was powerful and extended. The pairing makes familiar pieces more interesting and engaging without the edge of seat balance found earlier. The melodic nature of Haydn’s ‘String Quartet In D, Op. 76’ [Engegårdkvartetten, 2L] is obvious alongside the inspired playing. Tone could be richer, but this speaker is not known for its rich tone, anyway. The other amplifier I tested in this issue, the Onix DNA-50, brings out more warmth in the lower mids, but doesn’t have the speed that the Cyrus does. The One encouraged me to bring in my regular reference speakers, PMC Fact.8, which are a bit pricey for the amp but seemed to work rather well. Both have the ability to stop and start on the proverbial dime, which makes ZZ Top’s brand of blues rock particularly gratifying. Things got interesting with the first track from Tres Hombres [London], ‘Waitin’ for the Bus’ and moved up to blinding on ‘Jesus Just Left Chicago’ that follows it, the guitar playing presented in all its grungy glory. Reference Recordings’ latest release is Fiona Boyes’ Professin’ the Blues, and it is as ever superb. The scale and character of the kick drum is just perfect, it’s softness a great contrast to the gravelly vocals and gritty steel string guitar. It proved that the Cyrus can do acoustic expanse as well as it does immediacy, which is a lovely combination if you can get it.

The fact that Cyrus updated the firmware several months after the One’s late summer launch implies that the company plans ongoing improvement, which is great. But more significantly, few brands have succeeded with Class D amplification as Cyrus has in making the One such an entertaining and well equipped amplifier at a reasonable price. The remote may be small enough to lose in minutes, but the app is a free upgrade that makes the One much more ergonomic. Add this to scorching sound and you have a product that should put this brand back at the top of the value for money tree.