Greg Chapman at VAL Hi-Fi is a brave man. He became a dealer and distributor when the industry is thick with others doing the same thing and took on a marque sold directly by the manufacturer at prices a distributor/dealer could not hope to match. Line Magnetic is a Chinese company specialising in valve amplification. It has a substantial range of products on the market, many of which are also available on eBay at what appear to be silly prices. There is at least one catch with such apparent bargains, and that’s the line in the small print that goes, “International postage of items may be subject to customs processing and additional charges.” And that is on top of pretty steep postage prices. As anyone buying from Europe has discovered this year, “customs processing and additional charges” can add up significantly, with both VAT and import duties adding in the region of 40% to the cost at your door.

What Greg has in his favour is the ability to demonstrate the product; a bargain isn’t a bargain if it doesn’t work with your system. He also offers a two-year warranty (six months on the tubes); saving a few quid importing an amplifier from the other side of the world doesn’t seem like quite the bargain if it comes with a whole heap of grief should something go wrong with it. On top of that, you’ve got to hope that what you buy isn’t counterfeit, something that Line Magnetic warn about on their site. These factors favour buying from the official source, and all of which add up to buying added peace of mind. 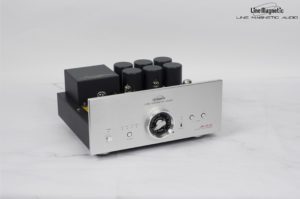 The LM-512 CA preamplifier is the top model in Line Magnetic’s range, and it’s a substantial beast with a very distinctive volume pointer that can be used as a knob or controlled with up/down buttons. In most instances, you will use the neat aluminium remote for this and input selection. It’s essentially a tube preamplifier with an RCA 22DE4 for rectification, 6922 (ECC88 equivalent) valves in the driver stage and Mullard 6KZ8 triode/pentodes providing gain. It counts Jensen and Mundorf MCap capacitors among its components and includes a solid-state bridge rectifier, a job done with tubes in some preamplifiers. Construction internally uses point-to-point wiring. Although a circuit board is exposed when you lift the tube cover, this is mounted on springs to provide a degree of isolation to the smaller tubes. There are large rectifier tubes fixed to the main chassis below. External build and finish are to a high standard, and only the styling gives away this preamplifier’s geographic origins. I like using chunky connectors and switches on the back panel where there are three RCA inputs and one pair on XLR, the latter provided with a rare hot pin switch to suit different arrangements within the connecting cable. Output is on both connectors, although the XLR connections do not provide a balanced signal that requires extra transformers.