To say the classic BBC LS3/5A is ‘iconic’ is something of an understatement. Even though the design is older than many of the people who buy a pair today, despite the BBC having long since moved on to other loudspeakers for speech monitoring in small spaces, and the age of the design notwithstanding, the LS3/5A still pulls in the kind of cult following that few other products can match.

As such, the LS3/5A’s specification sheet is functionally sacrosanct. Which means that Rogers making an ‘SE’ version could be the stuff of pitchforks and burning torches (OK, angry posts on internet forums and Twitter feeds… but that is merely the 21st Century version of the angry mob). In fairness, Rogers is one of the few brands that could make a souped-up LS3/5A, as most of those original era BBC-designed loudspeakers sold in the domestic market had a Rogers badge. But that brand equity would be eaten up fast if the SE version of the LS3/5A was more an ‘homage’ to the speaker than the speaker itself.

Rogers already makes standard 15-ohm versions of the LS3/5A, using new versions of the 19mm Mylar dome tweeter and 110mm Bextrene mid-bass cone originally made by KEF. Everything about those standard Rogers LS3/5A is as per the original LS3/5A; an outstanding mini-monitor of its time that still sets a high bar in terms of transparency, especially in the mid-range. However, if we are being truly honest about the LS3/5A, its dynamic range is somewhat ‘muted’ in its standard guise. In an effort to not be burned at the stake for my heretical stance, that is set against modern loudspeaker designs, many of which trade tonality and accuracy for excitability, and that’s one of the big reasons why the LS3/5A deserves its cult status. 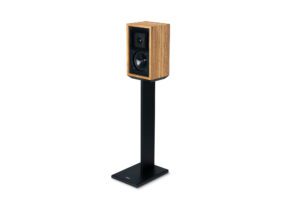 The whole SE version project actually started out as trying to find a way to make the LS3/5A more dynamic without changing the speaker itself. Rogers experimented with the loudspeaker stand and found Panzerholtz (a.k.a. ‘Tankwood’) to be a perfect, if costly, partner. Panzerholtz is a mix of hardwood and phenolic resin, prized both for its acoustic properties and the fact it’s literally bulletproof! It ends up being about the densest material this side of making the stand of solid metal, but without the hysteresis issues or the problem of making a stand into a kind of 24” tuning fork you can get with solid metal stands. It wasn’t too much of a step from there to seeing what impact Panzerholtz would make when replacing one or more of the thin walls of the LS3/5A’s cabinet. Listening tests followed fast.