2016 was a tumultuous year. Musicians fell like flies and voters confounded pollsters on both sides of the Atlantic. Meanwhile for Roksan, it closed the year in the hands of Monitor Audio. Roksan co-founder and owner Tufan Hashemi stepped down to ‘spend more time with his humidor’, while the well-established loudspeaker brand gains an audio electronics division with a great reputation. It’s not the first time that the creator of the iconic Xerxes turntable as been sold: the company was bought in the 1990s by the Verity Group, then-owners of Mission, Quad, and Wharfedale, but was quickly bought back by co-founders Tufan Hashimi and Touraj Moghaddam (now of Vertere). But this will be the first time in the company’s 32 year history that Roksan will be run without the involvement of its original founders. There are no other changes to Roksan’s infrastructure and the company’s full range of turntables, electronics, and – for the time being, at least – two models of loudspeaker will continue to built in London.

The Blak range was the last to be developed under Hashemi’s direction. It comprises a CD player and this amplifier, both sitting at the top of the Roksan sound quality tree. Blak is not as pretty as the Oxygene range, but one suspects that results in fewer compromises in amp design. The Blak integrated is a beefy 150 Watt model with a built in USB DAC and aptX Bluetooth receiver that sit in a fairly conventional chassis, but one with an attractively distressed fascia available in a range of colours. It has a large, clear LED display and the minimum of obvious controls, I say ‘obvious’ because there are two hidden under the front panel: one switches it on and off while the other selects amplifier or headphone output. It’s a good justification for the ‘RTFM’ acronym because if you don’t read the manual, you might not figure out that your ‘silent’ amp is in headphone mode!

The capacious back panel hosts a nice set of WBT speaker cable terminals, three sets of RCA inputs and an XLR input, alongside sockets for a moving magnet equipped turntable. It’s not clear why there are no other digital inputs for the onboard DAC apart from USB and Bluetooth, as space is certainly not the issue. The DAC itself is good for PCM up to 24-bit/192kHz and DSD128, so it’s more than adequate for the majority of the music you might actually want to listen to.

The front panel controls you can see extend to volume, go-forward/go backward input selection, plus an ‘OK’ button. This last has to be pressed after you have selected the input. Another foible is that the displayed volume level changes in twos, so you can have ‘14’ or ‘16’ but not ‘15’. It’s the same on the remote handset, and the volume steps are quite big, at around 2dB depending on speaker. It’s not a problem, but seems odd in a time of 0.1dB increments.

Listening commenced with a Melco N1Z digital transport connected directly to the Roksan’s USB input, and a pair of PMC Fact.8 loudspeakers hooked up to its outputs. The result was rather enjoyable thanks to a good sense of timing, an even-handed tonal balance, and evident – but not overt – power. It coped with the dense interplay of Van Morrison’s ‘The Way Young Lovers Do’ [Astral Weeks, Warner Bros], avoiding a tendency to brightness by dint of giving full body to the double bass that, just about, keeps things together. This suggests that the bass is a little warmer and fuller than average, a characteristic that came through once or twice, but is pretty subtle overall. With Vivaldi’s ‘Belleza Crudel’ [Tone Wik, Alexandra Opsahl, 2L], the sound was vivid and open, with lots of space around the period instruments, and plenty of timbre to enjoy. Moving to solo piano changed the image completely, revealing that Roksan’s Blak is highly capable of exposing the nature of each recording. The piano remained tightly focused while delivering a good deal of the spirit of the playing.

Moving to an external converter in the shape of a Primare DAC30 did improve matters quite considerably; essentially, a veil is removed and you can hear a lot more fine detail. I guess it’s a bit much to expect an onboard DAC to perform as well as one that has it’s own dedicated power supply and considerably more space to make itself at home. It did reveal the Roksan Blak to be a better amp than initially thought, which is no bad thing. The sense of dynamics, transparency, and presence it delivered made a very good case for using this amp in elevated company when it comes to source and speakers. By this point, I was enjoying Henry Threadgill Sextett’s ‘Bermuda Blues’ [You Know The Number, Novus], which has lots of fine detail for an amp to dig up, and this was something that the Roksan did with ease. It excelled at delivering the snap of the snare drum, the power of double bass playing, and the intense joy of the horns. In some systems the sheer energy and density of the piece can result in a cacophony, but this amp has the power and coherence to deliver it in thrilling form without any danger of ear ache! 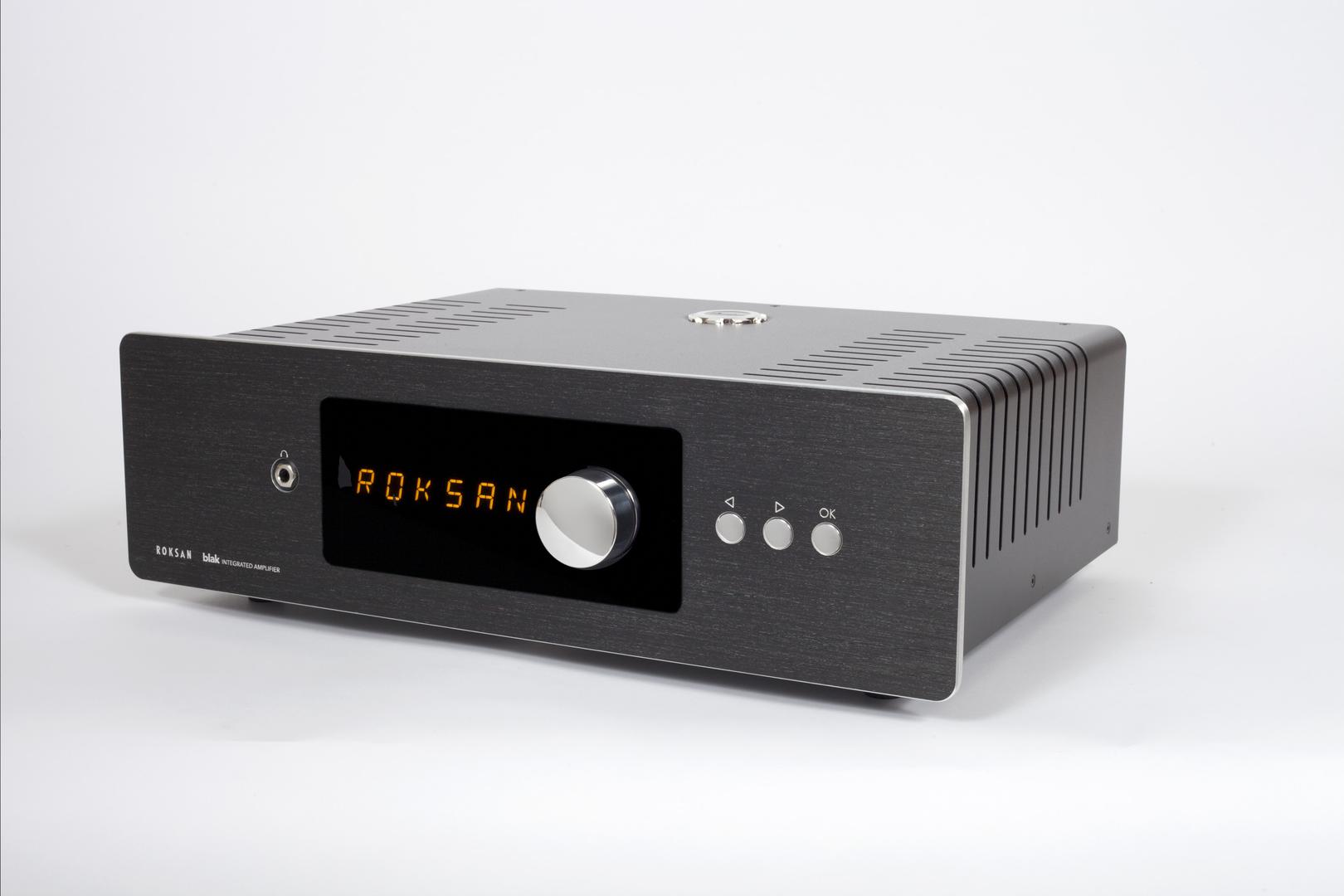 Going back to the Van Morrison track, it was apparent that much of the warmth in the bass was related to the DAC rather than the amp itself, because the result with an external converter had a far stronger sense of presence, the vintage of the recording being much more apparent, and the genius of its composition even more so. Astral Weeks has been described as ‘the best album in the world (ever)’, and when everything falls into place – as it does here – it’s hard to disagree. A newer recording of older music, Haydn’s ‘String Quartet In D, Op. 76, No. 5’ [Engegårdkvartetten, 2L], displayed its light and shade in subtle graduation; the playing nicely defined without any hint of grain, yet with all the immediacy of the spirited playing in full effect. Bass is well defined, too; there isn’t the sense of grip you get with more powerful amplifiers, but in many ways you don’t want that unless you live and die for bone-crunching bass. Rather, you want extension as well as shape, and the ability to stop and start precisely, such as with the double bass and electronically sourced bass drum on Bugge Wesseltoft’s interpretation of ‘Round About Midnight’ [Trialogue, Jazzland].This expands out to fill the room, but remains focused and engaging, the amplifier responding well to being driven a little harder than usual and losing no composure in the process.

Next to an original Leema Tucana integrated, which is a more expensive amplifier, Blak doesn’t look as fancy and nor does it have the Leema’s plethora of features, but Blak’s rounder and warmer sound may well be preferable to many. The Leema sounds more realistic and powerful – there is more of the original acoustic and greater transparency – but there is also a clear sense of power that paradoxically seems less natural. The highs from Roksan’s Blak are a bit sweeter and the sense of musical flow is stronger, but if you want an authoritative sound the Leema will have more appeal.

I tried the phono input using a Rega P3 with an Elys 2 moving magnet. Upon playing a record from a victim of 2016’s war on musicians (Mose Allison, and his LP Run for the Hills  on Pure Pleasure/Epic), Roksan’s Blak revealed the soft and rounded – but jazz hipster sharp – vibe of the recording. It lost none of the snap that Allison brought to classics like ‘Hey Good Looking’: this can sometimes sound softened through on-board phono stages. I also gave the Bluetooth a spin (albeit with an iPad, which doesn’t support aptX), and it sounded tolerable with a replay of Gilles Peterson’s 6Music radio show; at least until I streamed the same thing over USB from another source, which added significantly to the experience. Both versions, however, served to reveal that Blak’s balance is kind enough to let lesser quality sources sound good enough even through revealing speakers. 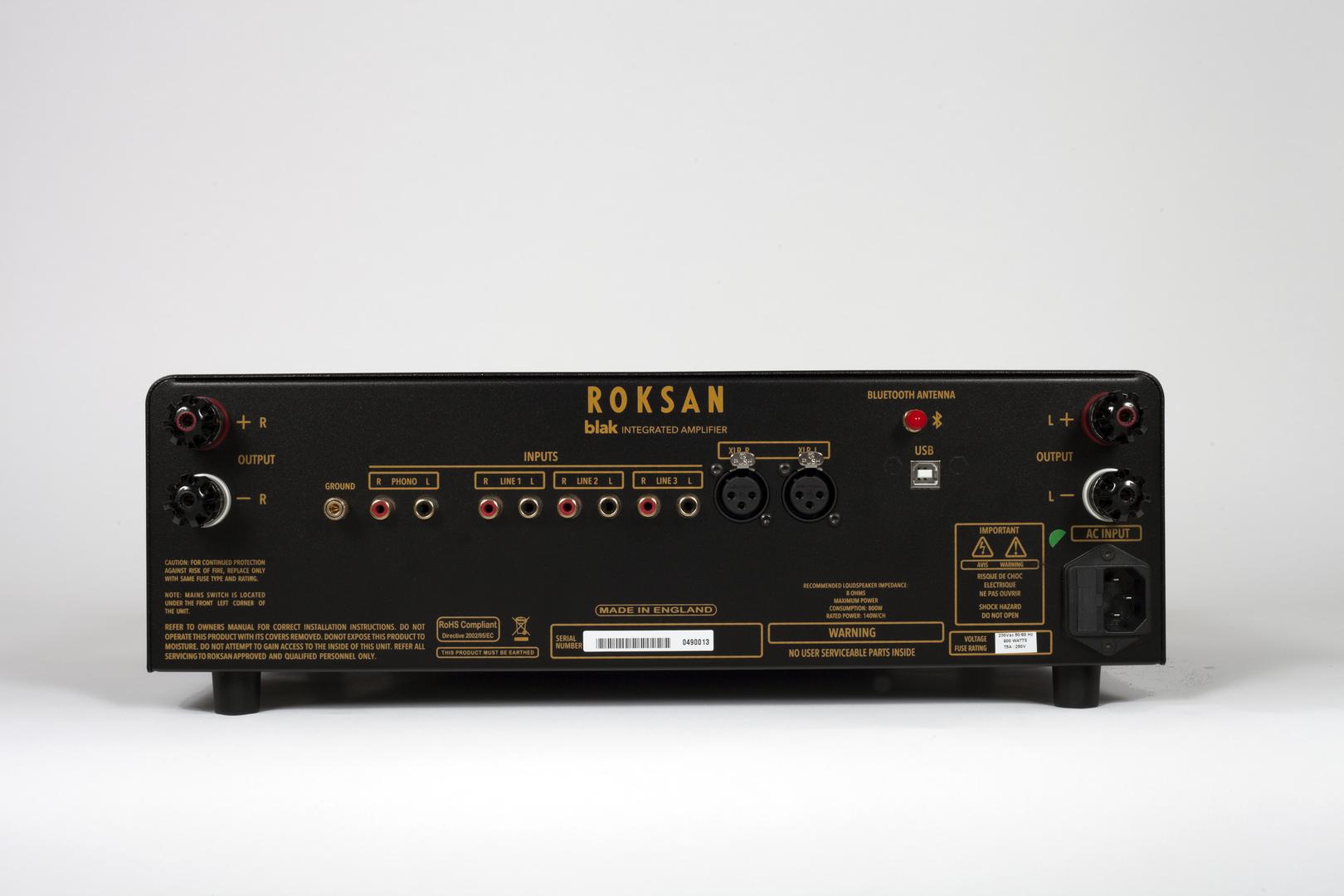 Roksan’s Blak could perhaps have a better DAC and it would be nice if MC cartridges were accommodated, but in terms of features and sound quality this is a well-rounded amplifier in all senses of the word. How much more Blak could it be? The answer (as revealed in the movie, This Is Spinal Tap) is: none, none more Blak. Recommended!