Some of the more interesting companies in this industry started out by modifying existing components; Tom Evans made his name upgrading the clocks in CD players to good effect in the UK, and in the USA Dan Wright of Modwright fame brought out the humanity in digital audio by adding tubes to the analogue outputs of DACs and CDPs around the turn of the millennium. Today, Modwright also makes a range of electronics using a mix of tube and solid state technology. As founder Dan Wright puts it, “I prefer tube circuits for line-level applications, such as source, preamp, phono or any voltage gain stage. I prefer SS components anytime that current is being amplified. This is not 100% hard and fast as I have also designed and been quite happy with both SS and PP [push-pull] all tube designs.”

Modwright follows this thinking by making valve-based preamps, phono stages and DACs alongside transistor power amps, but he’s aware that not everyone has the budget or space to accommodate multi-box amplification and this spurred the creation of the KWH 225i hybrid integrated amp. It’s based on the company’s KWI 200 transistor integrated, but has a preamplifier section built around a pair of triode valves which can be seen through an opening on top of the box. The power amplifier stage uses bipolar transistors and is specified to deliver 225 Watts into eight Ohms and nearly twice that into four, so it’s a powerful device and not just a heavy one. The blue anodised heat sinks on either flank are not just there to complement the display. It’s no bulldozer however, as the first 25W are in Class A and Wright stipulates that there is no global feedback used. 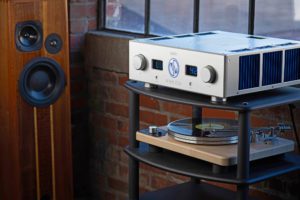 Internally it is constructed from modules which must ease maintenance as well as future upgrades. In standard form, the KWH 225i is a line-level amplifier with three inputs on RCA and one on XLR plus a fourth RCA pair for home theatre bypass/preamp input purposes. Unlike some Modwright amps you can’t add a DAC module, but there is the option to install a solid-state phono stage for MM and high output MC cartridges; gain is only 50dB, so those with regular MCs will need a step up. Alternatively, Modwright makes standalone phono stages that cater for both cartridge types and have tube rather than solid-state amplification stages.

I like the large displays for volume and input on this amp. It certainly beats squinting across the room for the marker on the edge of a volume knob. Equally important, however, is the option to dim the display down to nothing for those moments when you need to eliminate distractions and ascend to the cosmos along with David Gilmour, or whoever floats your escape pod. Display dimming, input selection and volume can be adjusted with an aluminium handset that is unusually chunky, but not very large and more ergonomic than it might appear. The handset can also turn the amp on and off. A few other buttons are present but do not relate to this amplifier, and don’t detract from its functionality.