Enough tech geeking… how does it sound? I liked the original Kronos Pro (and Sparta) for its ability to sound like someone got all the best turntables, pulled out what made them so good individually, then mixed it all together and produced a sound so free from noise and the sort of distortions we normally associate with vinyl. It’s like a ‘Greatest Hits’ of all the best things in turntable replay.

Then you hear the Discovery and realise… none of that gets close and that conclusion is totally wrong. Discovery is perhaps the simplest turntable to review as it just does ‘it’ better; ‘it’ being pretty much everything related to vinyl replay.

So, why was the conclusion about Kronos, Sparta and the other turntables wrong; it’s because each one of those turntables was like applying a photographic filter to the front of a camera lens. The Kronos sounded like it collated the sound of all the other decks because it applied a less intense filter in front of the sound. If the Discovery has a filter applied, it’s completely transparent enough to be functionally invisible. Or inaudible… help me out here, these metaphors won’t mix themselves! 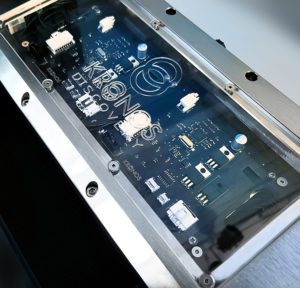 Every recording I played on the Discovery was like listening to it the first time. I was playing pieces of music I’ve been listening to for decades and they sounded as fresh and new as if I’d just slit the plastic wrapping. This is as much down to the Discovery’s uncanny ability to just step through surface noise (it doesn’t make surface noise go away, it just makes it seem irrelevant next to the music being played). Play something light and fast [‘Venus di Milo’ from Television’s iconic Marquee Moon album, Elektra] and that fast and snappy sound comes through. But here’s the kicker; I’ve been playing that album since the mid-80s and I always thought of them as a tight art-punk band from the 1980s, but essentially little more than a vehicle for frontman Tom Verlaine. What I didn’t realise is just how good a band they were. The drummer (Billy Ficca) in particular. And, staying in the same era with good musicians, playing Ian Dury’s New Boots and Panties!! [Stiff] was another one of those records that have been in the collection for decades, one that I know so damn well and one that left me wondering what pale impression of Ian Dury I’d been listening to all these years. This same ‘your records… anew’ applied throughout, from folky guitar to smoky jazz club. From row three of the classical concert hall to head-in-the-bass-bin dub. No foot was ever put wrong, nothing sounded out of place. The Discovery was contributing so little to the sound of vinyl that swapping a cartridge had a bigger net contribution to changes in performance.

With this much musical information on show, the Discovery comes with a little in-head readjustment time. Your first listen to the turntable is spent leaning into the loudspeakers, as you savour all that information. Slowly, you start to lean back and enjoy the music, unattenuated by contributions from the deck and arm for what is probably the first time ever.