One might almost describe it as a flurry of activity. In the first decade of his company’s existence, Antonio Meze has overseen the launch of precisely half a dozen products – and a solid half of them have been launched in the last 18 months.

Products four and five are both in-ear monitors of differing complexity and cost. The sixth is this pair of over-ear headphones – it’s the most expensive product in the current Meze Audio portfolio. And given that Meze Audio tries its utmost to make a statement, both in terms of specification and design, even when the product in question is a £179 in-ear monitor, it seems reasonable to expect a pretty sizable statement when Meze Audio launches a £3,699 isodynamic hybrid array over-ear headphone that sits right at the top of its suddenly burgeoning model range.

Not for the first time where a Meze Audio product is concerned, the Elite has been designed to within an inch of its life. We’ll discuss the novel and clever technologies that have been deployed here, but first it’s worth taking a moment to consider the sheer amount of designing that has gone on. After all, over-ear headphones tend to have their form dictated by their function – and, broadly speaking, that’s the case with the Elite too. But no material has been left undeployed, no decorative pattern deemed too arcane, no headband arrangement considered too extreme by Meze Audio when it comes to the design of the Elite. 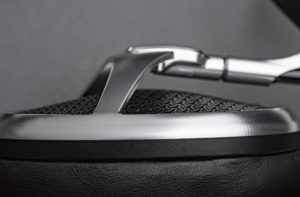 Consider the aluminium earcup frame. It’s a complex shape, and assertively three-dimensional where it joins the sliding headband adjustment arrangement. This isn’t the kind of shape that’s easy to make and comes with a lot of ‘almost’ earcups getting rejected because perfection isn’t enough for Antonio Meze and the team. Inside this frame, the open-backed cover is perforated with a fairly complicated repeating design that is, once again, painstakingly adjudicated by Meze’s obsessive-compusives. There’s nothing so gauche as a hanger arrangement here – instead, what we have is a system using carbon-fibre ‘suspension wings’ (patent pending), in conjunction with a slender leather headband. That’s two more materials, and two more patterns/textures to add to the list – and an overall design that will double the width of the average wearer’s head.

Mind you, there’s no arguing with the effectiveness of this arrangement. The Elite, which is hand-assembled in Romania, weigh a significant 430g, but thanks to the way the ‘wings and headband’ arrangement distributes weight across the wearer’s head they remain comfortable for hours on end.

The Elite are supplied with a choice of earpads. There is a pair of alcantara pads, 30mm deep, based on the design Meze originally developed for 2018’s Empyrean on-ear headphone, and an alternative hybrid design of alcantara core with leather exterior. Meze suggests this new hybrid arrangement reduces bass pressure and offers a more airy sonic signature. You’ll need to specify the kind of cable you require, though – Meze Audio offers its ‘4 mini-pin XLR plug’ cable with 3.5mm, 6.3mm or 4-pin XLR terminations, but you can only have one. Unless you want to pay a little more, of course.

As you might confidently predict, on the inside the Elite is as individual as it is on the outside. Not for the first time, Meze Audio has worked in close collaboration with Ukraine’s Rinaro Isodynamics – and for this headphone, Rinaro has developed the MZ3SE ‘Isodynamic Hybrid Array’ driver. A refinement of the MZ3 driver Rinaro delivered for the Empyrean headphone, the MZ3SE is a three-part driver designed to deliver selective acoustic performance for the different areas of the listener’s ear structure.