The original Kronos turntable (a limited run of 250, that proved so popular it joined the Kronos line full time as the Kronos Pro) was one of the most lauded and distinctive high-end decks of the early 21st Century. Its distinctive second platter rotating in the opposite direction to the main platter drew a lot of attention from those seeking the best in vinyl reproduction… and some industrial-grade scoffing from those who didn’t need to bother with listening to a turntable to stop them from mansplaining why it was wrong. Usually through a subtle combination of misunderstanding the concepts behind the twin platters, pointing to counter-rotating propeller engines and the ‘Caps Lock’ button on their keyboards.

And for those people, we have the Kronos Discovery; the already large Kronos Pro writ a lot larger.

That’s already one of those absolutely wrong statements that have a touch of ‘truthiness’ to it; meaning it’s wrong but sounds right. The Discovery isn’t the Pro for the huskier record collection, as it shares no components whatsoever with the Discovery. Louis Desjardins, founder and Big Brain behind Kronos went right back to first principles for the Discovery, learning a whole lot more about how and why a turntable works along the way. So, no… despite the pithy sentence, the Discovery is not the Pro writ large. It’s not even ‘inspired’ by the Pro. It’s closer to say the two run along common evolutionary design channels. Which will doubtless be misread, throwing in ‘missing links’ and ‘throwbacks’.

A quick recap of how we got to Kronos Audio in the first place. Louis Desjardins’ Kronos Audio first appeared in Montreal in the mid-2000s. Prior to his work in the audio field and spending two decades as a commercial photographer, Louis studied science at Concordia University in Montreal, studying the physics of waves as applied to both light and sound, particularly how those waves and vibrations were transmitted, reflected, and shifted when passing through different materials.

Louis took those practical physics smarts and applied them at first to other people’s turntables; rebuilding them, setting them up, and modifying them. This gave him a good base to develop his own turntable, combining the physics he learned in college with the practical applications gained in the intervening 20 years.

Here’s the really clever bit. Louis didn’t just copy a prior design; he hit the books. He happened across an article describing how torque forces generated by a rotating platter impact the plinth of a suspended turntable. It wasn’t too great a stretch to realise that all existing turntable solutions at the time abjectly failed to deal with the problems described in this paper (and, when you find something that does address those problems, clearly audible), and set to eliminating those torque forces by effectively mirroring the drive, bearing and platter mechanism of a turntable, with the second platter counter-rotating at precisely the same speed as the first.

Using the journalistic equivalent of a Rocky-esque montage, the result was the original Kronos. OK, the result was years of experimentation and development before the Kronos even hit the drawing board, but you get the picture.

Kronos Pro (née Kronos) was the first turntable to address these parasitic vibrations head-on. Sure there have been counter-rotating platters before, but many used a single drive motor or some other ‘commoned’ part in the chain. But with Kronos, the first step in reducing parasitic vibrations was to design a suspension system that would minimise vibration transfers from the turntable drive system and motors and from the environment. If the motors are mounted on the non-suspended turntable base, then the plinth supporting the rotating platter and tonearm can be largely distanced from both motor-borne and environment vibrations. Further isolation from motor noise comes by using tuned damping elastomer drive belts, rather than direct motor coupling, or idler wheels. Using non-cogging low vibration DC motors also helps rid the system of potential vibrational elements.

Meanwhile, horizontal level stability is increased by hanging the plinth from posts rather than supporting the plinth from below. In this sort of over-hung design, the gravitational force acting on the plinth adds horizontal stability by avoiding the tendency of the plinth to topple over as happens in underhung designs. It also provides the benefit of using mass-loaded damped suspension materials, which help diminish vertical oscillations. Finally, constrained layer construction and choice of materials help dissipate vibrations within the non-suspended base of the turntable, reducing vibration transfer.

This is the backbone of the Kronos concept, and while everything about the engineering and application of the Discovery changes, these core rules remained constant. And by everything, I mean everything. Louis started with a clean sheet with Discovery. It’s a very big clean sheet, reflecting the sheer size and scale of the Discovery; Kronos was a big turntable in its own right, and its necessary physical height made it a very physical presence on the equipment table. Discovery makes it look compact. It’s taller and a lot wider. A lot heavier too. Fortunately, Kronos is making a table for the turntable, which can also hold its power supplies. 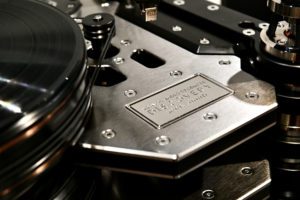 There’s a lot of technical ground to cover here in terms of just what Discovery brings to the (pun intended) table. So buckle up… it’s about to get nerdy.

Discovery began as a going back to the basics research project. Kronos had already delivered world-class levels of chassis resonance reduction, vibration reduction and keeping residual energy transfer under control… the task was to see if it was possible to go further, and whether going further delivered improved performance as a result.

In going back to basics, Kronos designed the Discovery with a completely new chassis technology, which resulted in twice the number of parts going into the top turntable. Kronos developed a wholly new way to attach the chassis to the suspension system, using completely different soft clamping methods. This treats the chassis more like the soundbox of a guitar or a violin because in that case how it’s held dictates to some degree how it sounds. Of course, the requirements for a turntable chassis and a violin are very different and the methods of soft clamping differ too (if nothing else, it’s bloody hard to get the Discovery under your chin).