Have you tapped into your inner musicologist and entered the world of high-quality streaming yet? Are you not yet addicted to having the world of music as your library rather than being limited to what you find in your record or CD rack? Over the past few years, the entire proposition has been getting better and better to a point where, right now, with a little careful consideration, there is some superb equipment available. These advances in musical quality and, particularly, stability have never been more evident than at the lower end of the market. If you’re still thinking about it, then I might have something of interest here.

Gold Note is an Italian company that originally made its name with analogue equipment. The company’s DS-10 EVO is a streamer/DAC which can be supplied with or without an internal analogue preamplifier. Whatever configuration you choose, it makes a powerful case for itself by offering extensive features in a half-sized box at a very reasonable price. It has the technical and musical chops to sit at the front of some impressive music systems. The list of features starts most obviously with a remarkably bright and clear 2.8-inch TFT display. Easily read from across the room, it tells you everything you need to know. The unit I used was also equipped with the optional preamplifier section, which means that you could drive it straight into a power amplifier. If you choose this configuration, then you make it entirely viable as a streamer / DAC / preamplifier. Using it with an integrated Vitus SIA 025 amplifier meant that I was initially running it through two preamp sections, which is less than ideal, obviously. It was easy to remove the volume control electronically, thereby turning it into a straight line level output unit with the anticipated increase in sound quality quite apparent. But, from a system point of view and given its quality, the preamplifier section can make a lot of sense. We will return to the DS-10 EVO again in the future when I will look at it afresh and with its optional separate power supply (PSU-10 EVO) in an all-Gold Note system, including a power amplifier and speakers. 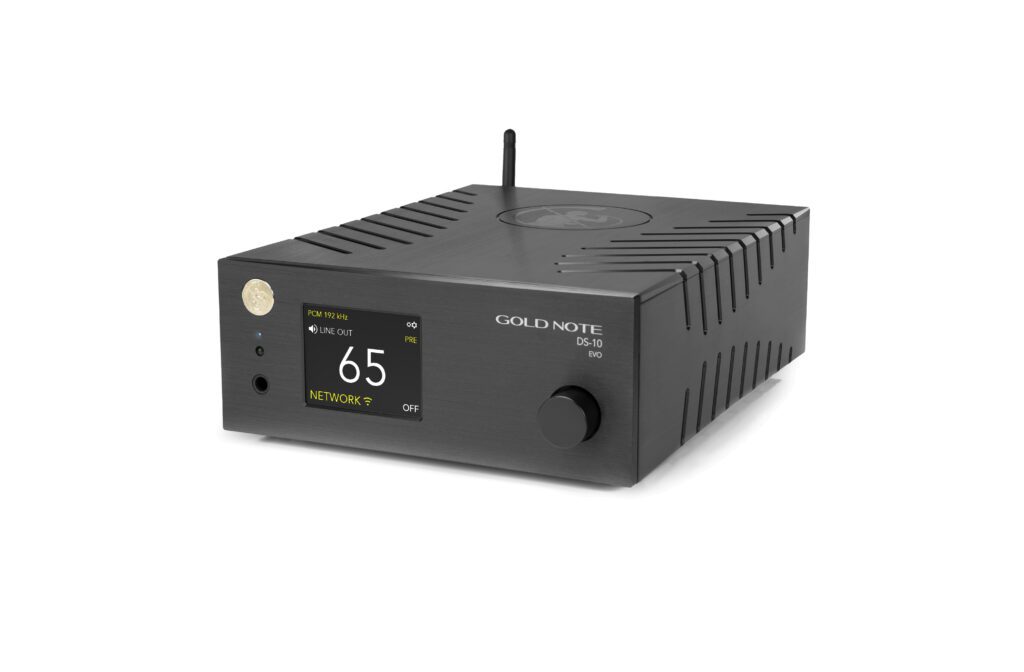 All commands run through the rotary control. You merely set the parameter you want to access and scroll through the options. It’s as simple as it sounds. It’s worth mentioning the remote control here, too, which can mimic the onboard controls. All I will say is that if only all remotes operated as well as this and from such fine angles, the audio world would be a better place.

What can it do?

The DS-10 EVO can handle all resolutions, including MQA and Gold Note offer its own control app to navigate through the world of music. It can also accept external digital inputs from other equipment through a series of various rear panel connections. All the usual streaming services are catered for, including Tidal, of course, which is the one I generally use.

The Gold Note platform is a simple design based on the M-Connect platform, but it does provide you with all the basic access you need to search for and play music. I would gently suggest, though, that the search function should be quietly incorporated into the top bar as its pop-up box looks rather clunky. I used the app throughout my time with the unit and the Tidal version. It’s well worth noting here that the Gold Note DS-10 EVO is fully updatable online as and when improvements become available, and the app, too, will no doubt undergo the same soon.

This is literally a plug ’n’ play machine though I am going to slip in the usual caveat that it does like a bit of running so it can stretch its legs and clear its throat. Give it an hour or so of work to do, and it will be in full flow. Connected to a router with the streaming service account enabled, you are looking at a comprehensive streaming DAC. Unlike many similar streamers, the DS-10 Evo was up and playing in a few moments, the current resolution being displayed in the top left of the screen and the unit configuration writ large in the centre.

Interestingly enough, Gold Note included a range of settings that I haven’t seen on a streamer/DAC before. They call it Chameleon mode, and though its concept is simple, the sheer depth of its implementation possibilities is impressive. By controlling three parameters, you gain access to 192 different set-ups. This allows you to customise the DAC to suit your own music system and, of course, taste. Broadly speaking, these three control the EQ curve, and the De-emphasis curve and provide fine control options over the voltage being sent to the DAC section itself.

The individual adjustments, alongside descriptions of their effects, are listed in the detailed handbook, and they deal with everything from the tonality to the coolness or warmth of the sound. This can be done via the front panel, and there are three presets that can be selected once you have spent many happy hours running through the 192 options before locking in those combinations you wish to keep. You may, for instance, have distinct preferences when listening to certain styles of music or just trim the system tonally or work those numbers to make the system sound fit the room acoustics better.

Alternatively, you might just like to tweak. A bit overwhelming? Perhaps, but fear not, getting back to the standard set-up is as easy as pushing a button, giving you a constantly available reference point. Actually, I liked that setting the best.

But can it play music?

Let’s forget the numbers and the features and pose the question that eventually must be asked of all audio equipment. Is it musical? Such a loaded and weighty enquiry for sure! I’m going to spare you all the arguments and justifications which could go on forever before ending up back at the beginning and rephrasing it. Is it musically intriguing and enjoyable enough to actually make you want to listen to it? The answer to that is a resounding yes. In fact, it’s really the only question that has ultimately ever really made much sense to me of any audio component. This little machine has a compelling musical nature and some desirable attributes that appeal to those core audio values that I have always looked for. 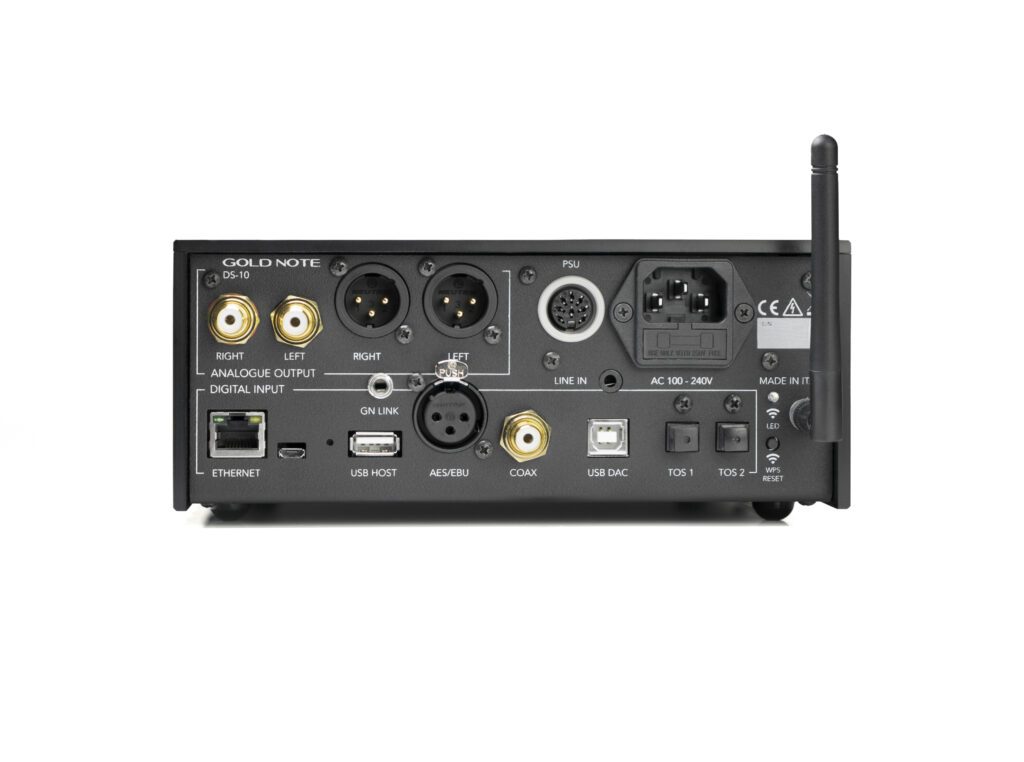 It sounds taut and controlled but never rhythmically over-rigid. Its tonal balance is just about spot-on, and it never strays into that rather matter-of-fact sense of resolution-first music style that some streamers/DACs do. In fact, its resolving power tends to feel entirely subsidiary to its bouncing sense of tuneful exuberance most of the time. But what I really enjoy about it is the way it puts all the musical elements together to highlight a performance. The top to bottom balance and certainly how it can layer the instrumentation is compelling.

Where some systems can bombard you with needlepoint resolution yet sound rather flat and uninteresting, the Gold Note has a real and attractive view of the soundstage and the shape of the music. It is also very quiet, which helps enormously and shows you perspectives and instrumental pictures and shapes with dimension and exceptional stability. It has real depth in more ways than one.

I admit to being surprised at how musically interesting this unassuming but highly efficient little machine is. I think it’s a great little package because it is always succinct and to the point. It sounds very good indeed, and as a gateway to the world of music outside your living room, I’d say it’s a pretty solid investment for anyone wanting to take that next step.