Alongside the recent resurgence in all things audio, there has long been interest in classic audio electronics. As Hi-Fi+ aims to be truly global in its outlook, those classic designs of the 1950s and 1960s pose a slight problem as most of them didn’t travel. A classic Dynaco ST-70 has less ‘resonance’ with English classic audio collectors, and a Saville Double-Six is not high on the wish list for American enthusiasts. However, the input of Japanese audio obsessives from the 1980s onwards changed much of that; they recognised much of what was good from our collective pasts, and frantically bought it all up. As a consequence, some of Leak’s ‘point one’ power amplifier designs – such as the TL/10, TL/12 and 12+ and the Stereo 20 – were some of the brightest stars in the classic hi-fi firmament. Also as a consequence, mint condition versions are now rare and command a good price. Fast forward to 2021 and there is still a lot of mileage in those circuits.  A Wiltshire start-up called English Acoustics has taken one of those designs – the Stereo 20 – and lovingly recreated it, with more than a sprinkling of 21st Century sensibilities. The result is the English Acoustics Stereo 21c. ‘Made in England’ is often stretched beyond all credulity, but this time it’s entirely genuine, with little more than the terminals sourced outside the shores of ‘Blighty.’ 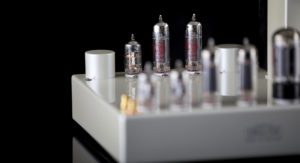 We can’t look at the English Acoustics Stereo 21c without looking at the amplifier upon which it is based; the Leak Stereo 20. Engineer Harold Leak founded H.J. LEAK & Co back in 1934 and from the outset, the company made high-performance audio equipment. However, it was in the post-war era that Leak really took off. The company’s Type 15 amplifier of 1945 was the first commercially-available amplifier to feature a push-pull, negative feedback design (this was about the time when D.T.N. Williamson published his ground-breaking circuit design in Wireless World). Leak’s initial design was soon followed by a series of ‘Point One’ models (the name taken from their then-exceptional 0.1% distortion figure). In 1958, the world of hi-fi was all about the move from monophonic to stereophonic sound, and Leak launched the Point One Stereo 20 chassis in that year. This power amplifier was one of the first to include two channels on a single chassis and used three ECC83 driver valves, a single GZ34 rectifier valve and two EL84 valves per channel, delivering 10 watts per channel. A subsequent transformer change and slightly higher operating bias in 1961 eeked out a little more power from the circuit, and it’s this 14 watt per channel circuit that is lovingly recreated and updated here.

English Acoustics itself began in 2018, with ex-BBC engineer Peter Farrow as its Chief Technical Officer and Jordan Jackson as Chief Operating Officer.  One of the company’s first projects was a restoration of a Leak Stereo 20. This itself is an understatement; this isn’t ‘restoration’ in the ‘repair, rewire, revalve’ sense… it’s more like the sort of Concours d’Elegance rebuild one might get when you throw above-the-odds money at a company like Aston Engineering. But, soon after one such restoration, Farrow and Jackson (which sounds like they should be making high-end wallpaper) realised they could engineer a new Stereo 20 from scratch, and add a few improvements along the way. This is a difficult task, as it’s easy to move from ‘curation’ to ‘homage’ to ‘pastiche’, but fortunately, English Acoustics stayed firmly on the side of the angels.