Right, I have promised to myself that this review will contain no swearing, but in all honesty it’s hard not to get a little sweary in the presence of the Dynaudio Emit 30 because it is a floorstanding loudspeaker with an excellent performance and a price tag of just £1,300 per pair. I mean, I know audiophiles who have spent more ****ing money than that on fuses. So, I’m finding it hard to contain myself.

Emit is the entry point to the Dynaudio product line. It’s a conscious attempt to deliver the sort of performance that’s ‘hard’ (read: ‘next to impossible’) to find at this price, and that’s a doubly-important consideration given that for many this might be their first-ever ‘proper’ loudspeaker.

The range comprises two stand-mount models (Emit 10 and Emit 20), two floorstanders (Emit 30 and Emit 50) and a centre-channel (Emit 25C). They’ve all been designed, styled, tuned, tweaked and optimised in-house at Dynaudio Labs in Denmark. The company’s state-of-the-art Jupiter measuring facility – a vast measuring array – played a key role in their creation. We went with the Emit 30 as it seems to be in something of a sweet spot.

In fact, that sweet spot is best highlighted by just how hard it was to get a pair of these loudspeakers. Dynaudio can barely make them fast enough to keep up with demand; even before the product range was launched, dealers were pointing their bank accounts at Dynaudio knowing the Emit range will sell like a complete, well… I promised I wouldn’t swear.

Given the cost of these loudspeakers, the Emit 30 uses some downright impressive technology in its drivers, enclosure and even the port. If you judge a loudspeaker by its weight (it’s not an ideal measure, and there are a lot of exceptions to prove the rule, but generally a weightier speaker means a deader cabinet, which itself means the drivers don’t have to fight a civil war with their enclosure) then the Emit 30 will impress. It has a cabinet made from 18mm thick MDF panels, wrapped in one of three laminate finishes; we went with Walnut, but there’s also the very on trend white and black (fortunately not the black ash veneer that the 1980s would like back). There’s a magnetised grille, too, but the speaker is best used ‘au natural’. 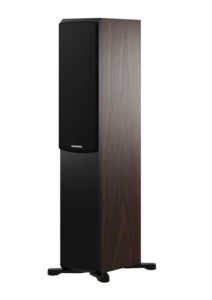 All Emit speakers use the Cerotar tweeter from the Evoke series, which in turn is based on the Esotar Forty tweeter from Dynaudio’s Special Forty anniversary speaker. Cerotar’s custom AirFlow magnet is made from strontium carbonate ferrite+ ceramic, while the 28mm voice-coil is made from aluminium – a Dynaudio signature, that is even used in the company’s legendary Esotar 3 high-frequency driver. Meanwhile, the ingenious Hexis helps control the resonances behind the diaphragm which then helps control the movement in the dome itself. Doubtless, someone will see the word ‘strontium’ and start replaying episodes of Chernobyl. Save yourself the horrors; naturally-occuring strontium carbonate is non-radioactive and commonly used in fireworks and magnets. It’s the strontium-90 isotope (a byproduct of nuclear weapons and accidents) that is the stuff of nightmares.

Emit’s mid/bass drivers are also based on those found in the Evoke range. Their diaphragms are made from MSP (Magnesium Silicate Polymer) – a material developed by Dynaudio to create an ideal combination of lightness, stiffness and damping for incredible accuracy. They’re bonded directly to the copper-clad-aluminium voice-coil assembly for even more control over their movement. The driver also features a dual-stacked ferrite-ceramic magnet for greater control over the driver’s movement and excursion. Emit speakers also feature a new dual-flared bass-reflex port, optimised to reduce air turbulence and minimise unwanted ‘chuffing’, particularly with deep notes. And that attention to detail even extends to the internal damping material, which has been measured down to the gram for the right combination of damping and openness.

Most loudspeakers take some time to run in, and the Emit 30 is no exception; from cold out of the box you could be looking at a hundred hours or so before everything settles down. Fortunately, the changes are subtle and gently progressive (rather than a hundred hours of aural pain and a complete change of character at the end).

This is a truly excellent loudspeaker, not simply ‘for the money’. It has the detail and clarity of many giant-killers coupled with a lot of bass, both bass depth and the dynamic range of far bigger loudspeakers. This results in a loudspeaker that has the scale and energy to handle Mitsuko Uchida playing Beethoven’s late piano sonatas [Decca]. At this price, you either get the technical brilliance of her playing or the range of emotions she conveys. It’s what separates the high-end from the merely ‘good’; on the Emit 30 you manage to hear both that information and the passion behind the playing. This alone is rare, but couple that with the sense of space and solidity of image the Emit 30 produces and you get the feeling of a real sized concert grand piano being played by a real human being… and that combination done right is incredibly hard to find in loudspeakers this side of about £3,000.

Such loudspeakers will never sell in droves if they only play to the classical or jazz-end of the spectrum, but the piano is a difficult instrument to get right on a number of levels and the Emit 30 does well in all of them. OK, so it doesn’t have the filigree ‘spaces around the notes’ inner detail of smaller, exceptionally well-designed two-way stand-mounts, or high-end models that cost as much as a container-load of Emit 30s, but that isn’t the point. Play anything from dance music to power-chord-driven rock and you get the same result. The original ZZ Top line-up has recently gone, but they left behind a legacy of swampy recordings of note, including ‘La Grange’ from Tres Hombres [London], and here it takes on that need to play air guitar, air bass (thanks, Dusty) and air drums.

Something not commonly discussed in loudspeakers is the design’s ability to ‘jink’; abruptly change direction in line with the music. This is a quality that is closely linked to a speaker’s ability to ‘time’, but it’s as much about tracking changes in melody as it is to do with tempo. The Emit 30 ‘jinks’ surprisingly well. Really deep electronic bass notes can get a little ponderous under extreme conditions, but you will have to be playing ‘Chameleon’ by Trentemøller [The Last Resort, Poker Flat] or similar at near party levels to reach those conditions. For the rest of its playing envelope, the Emit 30 effectively turns on a dime or a sixpence… if we still had sixpences.

Frankly, there wasn’t anything I threw at the Emit 30 that didn’t perform well, and that’s an important consideration. Sure, we can use carefully selected pieces of music that are designed to sound good or bring out the best in a system, but in the real world that the Emit 30 occupies, those are optional extras. This is a loudspeaker that needs to make good sounds when pumping some grime from a phone to a Bluetooth DAC, or belting out some K-Pop or practically everything you care to name. OK, so there’s no expectation to make a bad recording sound wonderful, but there is an expectation for the Emit 30 to not make a bad recording sound worse, and that’s what they do exceptionally well. Of course they sound great playing nicely recorded dinner jazz played at genteel levels, but they also hold together at higher volumes with relatively compressed music without making your ears bleed. If anything, the Emit 30 err on the side of forgiveness, because that surprisingly deep bottom end and not-too-peaky tweeter bring out the best, even in the worst.

It’s hard to look at the Emit 30’s limitations without looking at them through the filter of how little a pair of these loudspeakers cost. You aren’t buying a cabinet with a depth of finish that draws admiration from passing French polishers and furniture restorers, you aren’t buying a loudspeaker with a crossover network or drive units made from Platinum-coated Unobtainium (although what you get on the Emit 30 gets surprisingly close), and you aren’t paying for bearded Nordic artisans to assemble these speakers to your precise specifications. Yes, you can get all these things in a new loudspeaker for £1,300 per pair… if you have a time machine set to 1971. If you don’t have that time machine to hand, those limitations begin to look very nit-picky indeed. 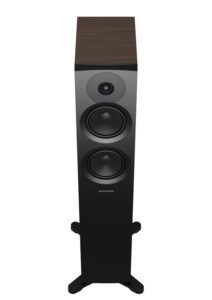 There’s a phrase used in audio; the ‘mug’s eyeful’. It summons up images of products that look like a bargain, but any notions of quality quickly stop at the word ‘look’. The Dynaudio Emit 30 is the absolute opposite of a mug’s eyeful; it offers superb value coupled with outstanding performance. They are every millimetre a Dynaudio loudspeaker, with the family sound and a deep, pounding bass that matches perfectly with the rooms in which such a loudspeaker will live. It’s a sophisticated design that cuts few corners to achieve that low price. Not only is it a good speaker, the Dynaudio Emit 30 throws down a gauntlet to other brands; if Dynaudio can do something like the Emit 30, why the **** can’t you?