Taiko Audio is the product of a Dutch high-end audio laboratory in Oldenzaal. It is the brainchild of engineer and audio enthusiast Emile Bok. Emile – who has been building loudspeakers since he was twelve years old – began building audio components back in 2008, starting with grounding blocks. Studying grounding – and later isolation – stood Emile in good stead for making a high-end server.

The first was the SGM 2015, a custom server design, originally used for demonstrations at the Munich High-End. The handful of units made for the 2016 Munich show was so highly praised by demonstrators, that the custom ‘Sound Galleries Music’ platform became a product in and of itself but was recently superseded by the SGM Extreme; a product that really lives up to its name.

Every aspect of the SGM Extreme is taken to, you guessed it, the extreme. The dual Intel Xeon CPU design (useful for running Roon alongside the modified Windows 10) is matched with 12 carefully selected 4GB DIMM memory modules. Recently, the SGM Extreme became even more, er, extremer thanks to the development of a custom super low-latency and low noise USB interface board. Where most server companies would be happy with off-the-shelf interfaces, Emile realised the USB controller circuit is a sonic pinch-point in what is otherwise the best way to send audio files from server to DAC. Building a custom USB controller board is ‘going the extra mile’ but first taking a 600-mile round trip before you go that extra mile. It also means Taiko Audio needs to furnish customers with DAC-specific code to provide the best possible connection between the two components. ‘Generic’ is not a word in Emile’s vocabulary. 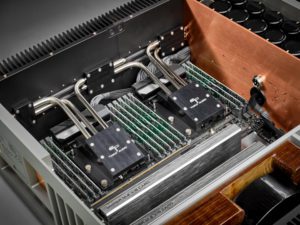 Nothing is left to chance here, whether it’s the OS stored on PCIe Intel Optane non-volatile storage (this is not a SSD or Winchester drive, and as a consequence currently costs more than most PCs), with anything from 2TB-24TB of onboard PCIe SSD storage. Emile’s audiophile interests shine through when looking at the rest of the SGM Extreme, as it is more like an extremely carefully laid out power amplifier, with individually chambered subsystems to prevent RFI leakage, a very high-performance linear power supply with 700,000µF of reservoir capacitance, and a passively cooled CNC milled chassis that features a hybrid of copper, aluminium and panzerholz wood.

Around about now, someone reading this will start grinding their teeth and saying, “it’s just a PC in a fancy box.” This is true… and Krug is just prosecco in an expensive bottle, or a Rolls-Royce Phantom VIII is just a posh BMW 7-Series. Sure, you can get some of the way there by using the same platform Taiko Audio builds upon; Signalyst’s HQPlayer audio player (for the original SGM) or Jplay software player, navigated by Roon, and you could do this on virtually any PC, and you’d be missing the point because the “PC in a fancy box” argument is reductionism taken to an absurd level. It would be almost impossible to replicate the degree of obsessiveness without going down very similar – and similarly expensive – lines and the performance upgrades the differences between what you can do with more off-the-shelf computer products and the Taiko Audio SGM Extreme is profound.

The Taiko Audio SGM Extreme holds concepts very similar to Sir Dave Brailsford’s ideas of ‘Marginal Gains’ and the ‘1% Principle’. Using these concepts of making small, but repeatable changes to everything in the process allowed Sir Dave Brailsford to take British cycling to go from winning a single Olympic gold medal in its 76-year history prior to 2002 to winning seven out of ten Olympic track cycling gold medals in the 2008 Beijing Olympics, and it took until the 2020 Tokyo Olympics for other teams to catch up. Looking to the improvements possible with a music server, Emile employed a similar ethos; that anything that can be improved, should be improved… even if that improvement produces marginal gains, those gains accumulate, and the net result pushes far ahead of the opposition. 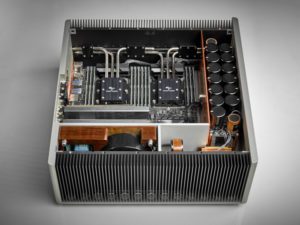 Listening centred around the SGM Extreme sending the signal via USB to the T+A SDV 3100 HV tested in the last issue. From the get-go, just in background listening, it was clear we were in the company of greatness. While streamed audio is extremely good, there’s always a nagging sense of something a little more that can be extracted from a spinning disc. There’s a ‘tangible’ quality to the physical format that doesn’t quite translate to streamed and served music. The score is evened slightly when dealing with well-curated music (online or locally networked), and streamed audio has reached a point where it eclipses all bar the best physical players. But when dealing with the highest quality options, to date, the spinning disc has the edge.

The SGM Extreme changes the game. It is the point of inflexion for that high-end sound. It’s the point where high-end streaming takes on the same degree of subtlety and rootedness that you might get from an absolute pinnacle CD or SACD player. For those of us who are used to streaming and what it can do, listening to the SGM Extreme is like 20 years of validation, and for those who aren’t, it just sounds damn good.

It’s a bit of an abstract property but the SGM Extreme just sounds ‘right’ whatever you play. The order and structure of the music are as you expect they should be, rather than ‘almost’ how they should be. This is something more than accurate tonality, wide dynamic range, precision, vocal articulation, detail, rhythm or any of those regular characteristics. In part because you can get pretty much all of those things to a very high degree from the most basic level streaming. It’s just that the SGM Extreme simply raises the bar on every aspect of music by several notches.

This results in a surprisingly ‘un-digital’ digital sound, whatever you chose to play. Those tiny, almost inaudible cues that help you define ‘live’ music from its recorded counterpart are almost impossibly difficult to replicate in the home, but the sounds coming through the SGM Extreme take you a notch closer to that reality. Moreover, the pervasive ‘thinness’ of sound (not in terms of tonality or solidity of presentation, more a sense of the sound being a little insubstantial) and the ‘greyness’ of digital audio is, well, gone. This is perhaps something more ‘perceived’ over a few hours than any kind of instant gratification, but you find yourself drawing deeper from the music played through the SGM Extreme.

I keep wanting to say ‘irrespective of genre or format’ in every sentence and it’s why I’ve been consciously avoiding pulling out specific recordings to highlight musical passages. This is like pressing the ‘reset’ button on your understanding of what digital audio is capable of. All those usual musical asides about aspects of sonic performance… yeah, it does all that and makes your DAC sound better in the process. But more importantly, it makes your music sound more like the real thing. And it does it universally!

The downside to the Taiko Audio (aside from it going away) is the name itself. Speaking from direct personal experience, never use the sentence: “I just got into SGM Extreme. It’s a Dutch thing.” If you do, the response seems to be “I didn’t know you were into that stuff” followed by discussions about talcum powder and how not to get it caught in a zip while cornering in the wet. Or something. Humour aside, the fact the custom USB board is so uniquely configured that you essentially have to use custom drivers to align it to the DAC you are using is at once both a sign of the SGM Extreme’s uncompromising stance and a cause of some minor consternation… until you hear how well the server ‘talks’ to the USB receiver of the DAC itself. Er, that’s it. Seriously, the quip about the name is about as critical as it gets when it comes to the Taiko Audio SGM Extreme. 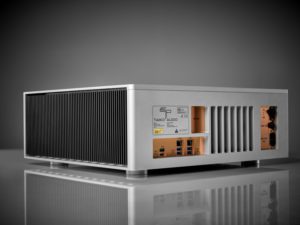 The Taiko Audio SGM Extreme is a musical revelation. It might be big, heavy, expensive, and uncompromising, but it also shows you exactly what is possible from a music server. Yes, it’s the server that could finally silence the ‘yeah… but I still prefer CD’ stick-in-the-muds, but more important still, it pushes far past the limits of what digital audio can do. The best don’t come cheap… but if you want the best in digital audio, this is it right now!