The LS6 was a two-way standmount of the post BBC design school. It was a Rogers design and the Chartwell-badged floorstanders shares little bar the name. This is probably a good thing; although it was a popular design of the 1980s and went through a couple of revisions during its life and was reasonably popular, the LS6 had a reputation for being deceptively difficult to drive well for a Rogers design, with a flaccid sounding bass whenever the amp was not up to snuff. However, the Derek Hughes-derived design has no such flaw in this respect, and the loudspeaker – whether in stand-mount LS6 or floorstanding LS6f form – reflects what a difference a generation makes in speaker design and technology. Mostly.

Like the VOTU (the extreme ‘Voice Of The Universe’ flagship from the Graham Audio brand), the LS6 is unlike many of the Graham/Chartwell line in that it doesn’t have to hold to an archetypal design from the BBC. As the drive units for these BBC-derived monitors are now all long gone, this task becomes ever more complex. The LS6 by way of contrast is more of a clean sheet, as it’s not a design with a cult following. It was a low-cost ported two-way from Rogers and never attracted the same attention as even the company’s LS7 loudspeaker, allowing Derek Hughes more of a free hand in the design. It still remains a ported two-way, however. It’s possibly best to think of the LS6 as a Chartwell design from first principles, rather than an homage to a 1980s Rogers.

The LS6 (tower and stand-mount) use a 19mm Mylar dome tweeter coupled with a 165mm polyproplyene woofer in a 17 litre cabinet. Where the two differ is the bookshelf speaker’s port passes to the rear of the thin-walled, bitumenised cabinet, where the floorstander’s port passes into what is effectively a built-in wooden stand to exit from the base of the speaker. The floorstanding speaker sits on a wide(ish) plinth. Looking at the performance specifications of the loudspeakers, the floorstanding loudspeaker is more about aesthetics than frequency response, because the two are identical in frequency response, nominal impedance, sensitivity and amplifier power handling.

This is a good thing in terms of actually selling loudspeakers. Although there are still many successful stand-mounted speakers on sale, the majority of mid-to-high-end loudspeaker sales go to floorstanders, and have done for the last 30 or so years. With ‘homage’ loudspeakers, there is little or nothing to be done about this – you can’t make a floorstanding LS3/5a without ending up with angry mobs, pitchforks, and burning torches being involved. But, with the LS6… go for it!

Their identical nature means the LS6f also sports the tweeter control seen on the stand-mount LS6. This affords the loudspeaker a +1dB or +2dB lift to the tweeter performance, which is useful for performing to more than just the guy in the hot seat (and it’s almost always a guy). However, the cynic in me thinks this adjustment is also handy to compensate for hearing loss due to advanced age, and to cope with very well-furnished homes of those born a generation or so before Ikea.

The LS6f is even less fussy about positioning than its unfussy stand-mount brother. That last had a rear-firing port, which meant the loudspeaker worked best some distance from the rear wall. By firing down and out, the port on the LS6f is more room friendly and the speaker can work almost bang up against almost any wall. Just a few inches from the rear wall will do. That being said, don’t mistake the LS6f for an installation pushover: it requires good, careful installation and particular care and attention in toe-in to get the performance on song. In fact, perhaps it’s this aspect that gave the original LS6 its reputation for ‘pipe and slippers’ bass: a relatively low-cost loudspeaker in the 1980s would be partnered with OK electronics and possibly installed with less care and attention than might be expected of a modern high-end design. Back then, many Rogers buyers were firmly ensconsed in the ‘all well-desgned amps sound the same’ school, and a more enlightened modern viewpoint would partner this loudspeaker with a little more care and attention, and the result is better bass. Don’t try the LS6f with a soft-sounding valve amp, though!

I used the Chartwell LS6f with the Naim Audio Uniti Nova integrated streaming amplifier, fed by a Uniti Core server, and with standard Naim NAC A5 speaker cables. This was a fine combination, bordering on a spectacular one in fact. It’s a well-matched system in price terms, the performance of the electronics provide a good contrast for the tonal balance of the loudspeakers (in particular, the amplifier’s grip on bass), and the amplifier section of the Nova falls perfectly within the maximum and minimum amp requirements set by Graham Audio/Chartwell. This was not the only amplifier used, but was notable for being a good match.

Although this is not directly from the BBC drawing board, there’s very clear BBC-related elements to the sound. Speech, especially diction, is extremely well handled, with particularly good control over plosive sounds –live BBC Radio 4 news feeds can be variable in quality, but the LS6f has a charming ability to cut through the sometimes-mediocre microphone technique and concentrate on the speech itself. Moving over to music programme, the same applies to piano music almost perfectly. It doesn’t have the almost transparent ‘better than the real thing’ piano sound of a LS3/5a, but on the other hand the LS6 seems more adept at defining the left-hand playing of lower octaves, and presenting those bass notes with greater impact, definition, dynamic range, and clarity. I’m not sure I’d trade that lithe, effortless midrange of the LS3/5 or LS3/5a for the greater bass depth of the LS6, but there will be many who would trade at least some of the LS3/5a’s ‘magic’ for a deeper musical underpinning, and for those people the LS6 and LS6f come into their own. This is slightly over-egging the pudding, as the difference between the magic of the LS3/5a and the depth of the LS6f is not so substantial; it’s more subtle shades of ‘how do you take your coffee?’ 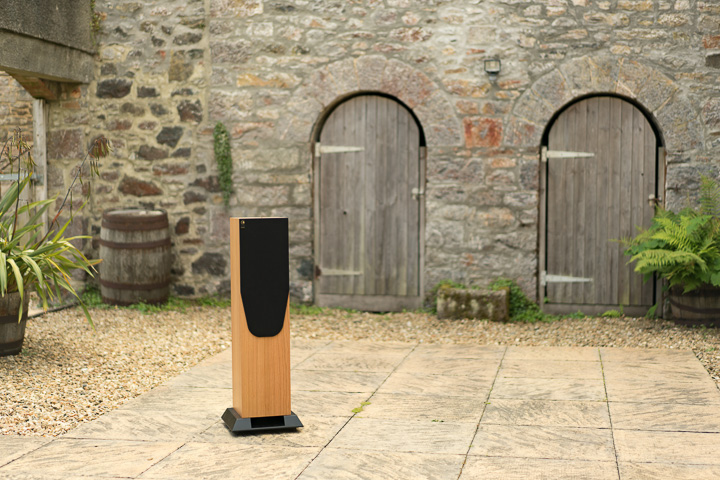 The other big BBC-like aspect to the sound is its ability to handle naturally recorded acoustic instruments, whether they be solo piano (Brendel playing the ‘Waldstein’ piano sonata by Beethoven on Philips) string quartet (the Belcea Quartet playing Ravel’s quartet in F on EMI) or massed orchestra and choir playing the Mozart Requiem [Baroque English Soloists, Gardiner, Philips]. In all cases, the tone is natural and the added bass and dynamic range compared to the LS3/5 is greatly received. OK, so the full drama of the Requiem shows the limits of a smallish two-way loudspeaker, but more in comparison with larger designs than noticeable limitations upon performance. The reproduction of acoustic instruments is its strong point, but the loudspeaker is not adverse to playing amplified sounds, too. I’ll temper this twice over; the headroom for playing loud isn’t really rock ‘n’ roll – ‘Back in Black’ by AC/DC from the album of the same name [Atlantic] isn’t designed to be played at refined levels, it needs to be played teenage testosterone loud, and the LS6f begins to get flustered and sound noisy and compressed at higher volumes. And, speaking of compression, the LS6f does not give compressed recordings a free pass. Data compression, paradoxically, is treated fairly (as in, if you have a 256kbps AAC file, it won’t lay any compression artefacts bare and such recordings actually sound pretty good through the LS6f), but signal compression sounds like a brutal hatchet job on the music. The Red Hot Chili Peppers’ Californicationalbum [Warner] is often considered one of the worst casualties of the loudness wars, and the title track with its radio-friendly mix is probably the most badly injured track on the album. Played through almost any good audio, it’s hard to listen to a sound so dynamically flat and pitched toward the mid-treble region, but it is particularly discomforting through the LS6f. The speaker lays bare the acute lack of dynamic range, sounding thin, nasal, compressed, and compromised. This, however, seems like criticising the LS6f for doing its job properly.

The Chartwell LS6f is a beguiling loudspeaker, and an example of growth within the ever-expanding Graham Audio portfolio. Like the massive VOTU, it represents a move away from simply preserving the BBC’s past in aspic. It still holds to the basic concepts expoused by the Beeb back in the 1960s and 1970s, but represents a useful branching out design-wise. If you always wanted a bigger LS3/5a, look no further than the LS6f!

Maximum output: Over 100dB per pair at 2m

Price: from £2,995 per pair depending on finish