I am going to go out on a bit of a limb here, but the Bricasti Design M3 DAC is very probably The Shape Of Audio To Come. This clever design is incredibly flexible; starting as ‘just’ a high-performance DAC, the M3 can be configured with built-in streamer and/or headphone amplifier. Rather than either produce a slew of ‘similar-but-different’ products or force users down digital audio and personal audio pathways they might not want to take, the Bricasti Design M3 DAC lets you – the end-user – take control of what features you need and what ones you don’t. In an industry that prides itself on its ‘bespoke’ approach, it’s odd that such options are so rare that they take up the introduction of a review. Maybe the Bricasti M3 learned the ‘options’ game from its BMW namesake.

The core of the Bricasti M3 is actually two cores; a Delta-Sigma DAC for PCM processing and Bricasti’s own one-bit modulator for DSD. The digital and analogue sides of the M3 (no matter what configuration) are fed by two completely independent linear power supplies. The M3 is fed by a solid array of digital audio connectors and outputs to equally solid balanced and single-ended analogue connections. If you go down the headphone amp route, there is a 1/4” singled-ended jack and a single four-pin balanced XLR socket.

Once again irrespective of DAC options you go for, there is a sophisticated level control flanked by six hard buttons on the right and a ‘read it from space’ red LED array on the left. Operation is a little ‘modal’ as a result (press input button, turn knob until correct input selected, push knob and return to base state), but navigating these modes is a lot less complex than, say, the paged menu tree on a digital camera, for example. It’s also aided by that surprisingly informative (for the relatively limited amount of text it holds) display, and any potential confusion can be either made clearer or opaquer in the thorough manual (clarity/opacity largely dependent on the user’s ability to comprehend the comprehensive).

Everything about the Bricasti M3 exudes a no-nonsense studio approach. If it were any more solidly built, it would be named after an American general and have a gun turret on its top plate. If the anodised front panel was any thicker and blacker, matter would be collapsing into it. It looks, feels, and behaves with all the assured unburstable reliability of professional equipment that leads a long and arduous life in the studio. So, the relatively pampered years a Bricasti M3 will spend on a domestic equipment stand, are little more than a breeze to this bomb-proof DAC. 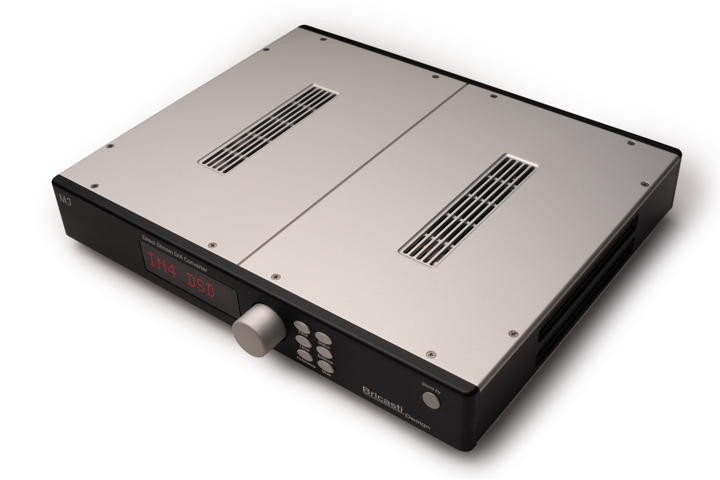 We went with the full-fat M3 with all the trimmings. Well, most of the trimmings; we went with the headphone and streaming options but didn’t include the optional remote control. I think this will be the likely divide; personal audio users will use the M3 at arm’s length and never find need for a remote, while those who use it as a DAC or streamer in a system on the other side of a room will welcome that functionality… but might not include the headphone amp.

The streamer board is functional if deliberately basic. It’s a wired-only DLNA network player, being fed music by server software on another device (typically a computer running JRiver or Audirvana). It’s not a media renderer, and isn’t Roon Ready, but if you use Roon, the M3 will be detected as an End Point. While this means there is no Bricasti-designed (or third party) software to control the M3 on a network, it also means there’s no need for such software and the M3 is about as robust a network attached device as it is possible to get in audio.

The headphone amplifier is similarly ‘belt and braces’ in approach. It’s a cost option because – like the streamer – it’s an independent circuit in its own right, with a fully differential amplifier stage, commoned for the 1/4” jack socket. This version (with or without streamer) is notionally called the ‘M3H’ by Bricasti and ‘the M3 with the headphone amp’ by everyone else. It’s a £679 upgrade on the base price of the M3.

The only downside to the options laid out here is they are not retrofittable. You specifiy the options at point of purchase, rather than an upgrade path. I also feel having the M3’s remote as a £549 cost option is a bit too ‘spendy’ no matter how well built the handset and how brilliantly it functions. 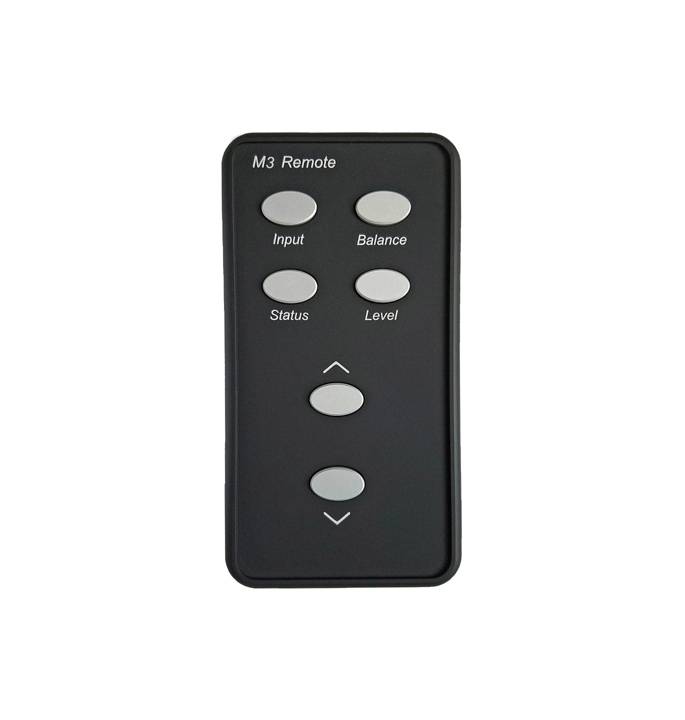 Interestingly, although the DAC features both balanced and single-ended outputs, if it’s at all possible, go with balanced. The difference in performance is marked and more than justified. Single-ended is in no way the poor relation here, but the DAC sounds just better enough through balanced connections to justify their use wherever possible.

The M3 follows the sonic line developed in the cost-no-object M1 and subsequent devices from Bricasti. In simple terms, the M3 takes the sound of the studio, brushes its hair and invites it home to meet the parents. The M3 has all the precision and leading-edge resolution, all the detail and imaging you might hear in the control room of a studio, but without that uncomfortable feeling of being exposed to all that necessary but intense analysis of mix and music that takes place from the engineer’s seat. From our comfy listening positions, we often claim we want the unvarnished truth from our audio systems, but in reality, that truth makes listening an uncomfortably intense experience. What we actually want is one or two notches back from the fully analytical presentation and instead want something resolving but allowing hour after hour of listening. And that is where the M3 shines.

I spun up all those usual test recordings of mine – Joyce DiDonato, Rachmaninov’s Symphonic Dances, John Pickard’s The Flight of Icarus, Jackie McLean, Malia and Boris Blank, King Curtis… the ‘go-to’ tracks on the ‘go-to’ albums I use to assess audio fairly rapidly. Each one effectively relates to its own sonic ‘tick box’ (King Curtis is a rhythm check, Joyce DiDonato tests for microdynamic shading and vocal clarity, and so on). And each received a solid tick or two when played through the M3. This means all the basics of what constitutes good audio (detail resolution, dynamic performance both on the large-scale and small-scale level, vocal articulation, coherence, frequency extension and accuracy, rhythmic consistency, bass depth and grip) all passed musical muster.

In most DACs, that alone would be a solid recommendation. One might expect a little more character and ‘savoir faire’ from the ‘pinnacle of performance’ DACs, but if all you get is all of those musical waypoints passed, you’re already in the top percentiles of DACcy goodness. And in truth, I expected the M3 to top out around here.

What I didn’t expect is the additional fluidity and full-bodied sound that the M3 also brings to the musical party. Moving on past those test tracks to the title track from Lana Del Ray’s Norman F***ing Rockwell! [Polydor, Tidal], the sense of organic flow and sheer enjoyment makes you hungry for more. That fluidity is normally the preserve of the highest of high-end DACs, and here it just makes even 21st Century production values more inviting and listenable.

Headphone listening is similarly first-rate through the M3. It’s infinitely capable (if you hung a pair of house bricks on a headband, the M3 would make a fair stab at getting them to sound good) and uniformly detailed, with a terrific sense of grip over the musical replay, and surprising levels of deep, yet extremely well-controlled bass as a bonus. 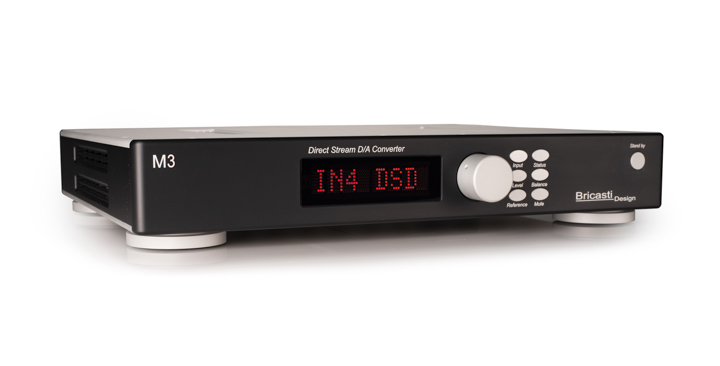 The Bricasti M3 is the cheapest product in the company’s line of DACs (the M5 network streamer is cheaper still but is of limited functionality). While that still doesn’t make it ‘cheap’ I feel the need to point that out because by almost any other company’s plan, a product this well-made would be at the pinnacle of the line-up. The fact Bricasti takes the digital converter to yet higher levels shows just how seriously the company takes digital audio, and right here in the M3 is the distillation of that intent. While in part a product of trickle-down technology from the epic M1, the M3 is also a damn good DAC in its own right. That it brings the kind of modularity hitherto seen in companies like Primare is the icing on the cake and shows Bricasti means business.