Rotel is one of those companies that doesn’t often grab the headlines much these days yet it has a heritage stretching back over 50 years. In the late 1980s, its entry level integrated amplifiers had a great reputation for delivering better sound than most thanks in part to UK design input that gave it an edge. This approach was duplicated by other Japanese brands with the Pioneer A400 being a notably successful example. In the mid-1990s, Rotel introduced some rather more lavishly built models that it dubbed Michi. These electronics had wooden end cheeks and resembled Japanese high end to a far higher degree than anything seen in its range before.

Last year, three new Michi models were introduced that are devoid of the Rotel brand and have distinctly different styling. They are also enormous. Both physically and in terms of mass, the S5 stereo power amplifier weighs in at nearly 60 kilos which is ‘big boned’ even for 500 Watts per channel. Yet its sleek styling does not quite match the muscle amp expectations that this figure suggests, neither for that matter does its sound but I’m getting ahead of myself. The weight is largely down to the power supply, which is dual mono like the rest of the amplifier and uses the largest bulk foil capacitors I have yet encountered. Even an image of the internals from above doesn’t really hint at the true girth and height of these things, but when you consider that the 2,200 Volt-Amp toroidal transformers are contained in the boxes marked Michi it gives a better idea of the scale than the 47,000 uF rating for each, unless you’re an engineer. The black aluminium extrusions on either side are heat sinks; square section tubes that have 16 high-current output transistors on the outside and fans to keep air moving. This is a slightly controversial approach in high end audio but these are extremely quiet fans, I did hear them once or twice but only when they switched off and there was no music playing.

They succeed in keeping the large heatsinks on the sides of the case relatively cool or at least they did at the levels I was using them, if you really hammered the amp into some ‘deaf’ speakers all that metalwork might come in handy. Like the early Michi amps this has had some UK design input, this time from long-time associate Bowers & Wilkins’ research and development team in West Sussex. The styling is also British courtesy of Goodwin and Hartshorn who work on loudspeakers for Bowers, they have made the back panel a lot more coherently arranged than usual with inputs above output connections and attractive extrusions on the cooling outlets. The glass front panel looks a little plain without its full set of landing lights in shape of the elaborate graphic display; you can run it like this but there are a variety of things it can show including power output in graphical form with the option to zoom into the meters so that you can see some movement even at lower outputs. There are various functions that can be changed in the display including auto power off time, display brightness etc. Changing the display is done with an RF remote handset, the same handset that controls the matching P5 preamplifier but fortunately careful pointing means you can change the power amp without upsetting the pre.

Connection to the preamp is via balanced or single ended cables and speaker connections can be made to either or both of the terminals for each channel, enabling easy bi-wiring should that appeal. There’s also a trigger connection for the preamp making it easier to switch both on and off with a single button. 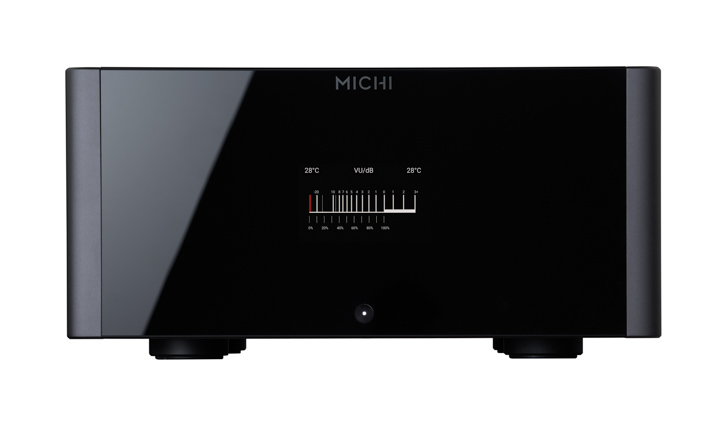 The P5 preamp has what can only be described as a wealth of features, including but not limited to a digital to analogue converter, MM/MC phono stage and Bluetooth reception. It even has tone controls and supports MQA, not to mention line level inputs on RCA and XLR connectors. There might be a more fully equipped stereo preamplifier on the market but not at this price. If I were to nitpick I’d say it’s a pity there’s no load adjustment for the MC input and perhaps some filter options for the DAC but this is being churlish given that it not only has sub and line outputs as well as digital and headphone outputs, and a USB A connection for charging purposes. There’s also an RJ45 socket but this is for network installation rather than streaming. The display allows for a huge variety of configuration including input naming, setting an input for AV bypass, balance and signal sensing. The only apparent omission is gain setting for individual inputs.

Driving Bowers & Wilkins 802 D3 loudspeakers the Michi pairing sounds a lot more relaxed and cuddly than you might expect given its power and bulk. The S5 is not a brute in a smart box; it’s a gentle giant that exudes a quiet confidence. The vibe is ‘doesn’t have to try too hard,’ which makes for easy listening at both low and high levels, using the USB input you get weighty bass with precise but not overemphasised leading edges.

Moving over to the coax input with the same AURALiC ARIES G1 streamer as source results in a more subtly graduated result with layers of detail presented over a solid and grounded soundstage. Reverb is well defined as are voices, both being delivered with decent energy and life when it’s called for. Patricia Barber’s ‘Company’ [Modern Cool, Premonition] has a hefty bass line that is kept well in line but allowed full headroom by the Michi combo, it’s one of those tracks that many amps struggle with but here the serious power on tap made sure that the music came first. Which meant that the trumpet solo had impact without any sense of glare and the drums delivered power and dynamics without the system breaking a sweat.

I gave Bob Dylan’s latest a spin [Rough and Rowdy Ways, Columbia] and these amps projected his well worn voice with considerable precision, resolving its croakiness without letting it get in the way of the narrative of the song. The opening track doesn’t really live up to the promise of the album’s title but that won’t bother Dylan fans. I played a few new albums on Qobuz and was impressed with the amount of differentiation it brought to them, systems that homogenise the sound of different recordings are doing them a disservice and masking the important details, that doesn’t seem to be the case here. The only constant seemed to be a polished glow which might be more to do with the streaming service because Tidal sounded more gritty and transparent. This could be down to bit rate variations but the point is that the Michis let you hear whatever is coming through, good or less so.

Using the MC input with a Rega Aphelion 2 cartridge didn’t really do justice to this remarkable transducer and it’s fair to say that owners of high end vinyl sources will be better off with standalone phono stages. Switching to a Tom Evans Groove SRX phono stage proved as much while revealing that the line inputs here can do depth of image while producing a fine mellow groove with an appropriately relaxed slab of vinyl.

With a pair of PMC fact12 Signature speakers in tow the result was equally engaging, this speaker’s relatively smooth demeanour doesn’t suit the Michis quite so well but offers up plenty of texture, space and all round character from various recording. I particularly enjoyed both Tom Waits and Conjure with the combo but did feel that it needed a little more leading edge definition. I tried a different speaker cable in Chord Co Sarum T which opened things up and added some pace to good effect albeit not delivering the 3D solidity that the Michis managed with Townshend Fractal F1. As ever with amps and speakers it’s a balancing act.

The return of Michi to the marketplace is most welcome, it adds a high end to Rotel’s offering and a pair of superbly built amplifiers to the market. The sound is as rounded as the casework if not thankfully as dark, anyone looking for a strong feature set with an even handed, powerful yet relaxed presentation should put them on the short-list. 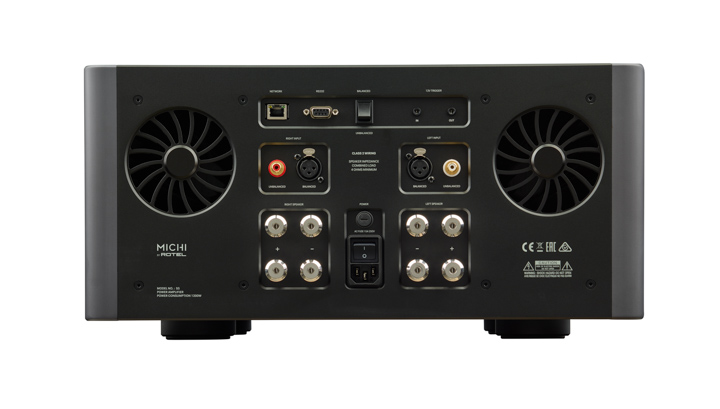