How excellent it is when a new loudspeaker both strays from the conventional and challenges your ideas about the shape of music in the home and indeed the music itself. From the set-up, positioning sequence and hearing the way that music flows from them, the Boenicke W8 SE+ from Switzerland will prove to you just how different it is. But simply putting together a loudspeaker design that doesn’t conform to the usual styles we see every day and giving it a genuinely new voice is easier said than done. Designer, Sven Boenicke is a Swiss recording engineer and his speakers show the world how he hears music and I would say, how he relates to it, because what we have here is something genuinely out of the mainstream. Yes, it’s a little unusual at first, strange even. But I assure you that is not different purely for the sake of it. My time with them started off as a bit of a roller-coaster of emotional responses alongside quite a bit of positional experimentation and several days of full-blown listening went by before I took a couple of days off and then came back to them with a more relaxed, less comparative mindset perhaps and it was only then that I began to really appreciate what a remarkable speaker the W8 SE+ really is. Because sitting there and waiting for any system to prise open your emotional receptors is a trap we’ve all fallen into. The music is the message but the messenger may speak in different voices and you surely need to be entirely open to its influences because audio enlightenment has many faces and comes in many forms. 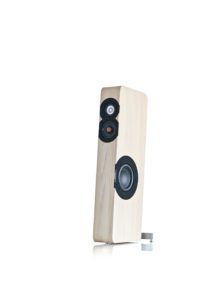 The W8 SE+ is small. Depending on your point of view of course but, looking at the pics, I’d say it’s smaller than you probably envisage. Its drivers are obviously small too as that fascinating cabinet is narrow enough get a hand round and lift clean off the floor. This is a good thing though as you will certainly spend some time moving them around your listening room, searching for the right placings and it means a small baffle too which bodes well for interesting images. So, what follows is a massively shortened version of what I found when I embarked on my voyage through the W8 SE+’s relationship to both my listening room and of course myself. It is, I stress, probably likely that your journey will be similar but, I’ll try to discuss various aspects of their design as I go. It is not my usual review format I admit, but this isn’t your usual speaker.