In the grand scheme of audio, there are some double acts that are hard to beat. Depending on which side of the Atlantic you come from, one of the best is either called, ‘vinyl and valves’ or ‘turntables and tubes’. From both a philosophical and sonic perspective, there’s something just so intrinsically right about using two technologies that should be a generation or more out of date and yet steadfastly turn in the sort of performance that sets standards. While there is something of a parallel in photography (a manual focus Leica rangefinder with a roll of Ilford FP4 or Kodak Tri-X is still relevant in some schools of photojournalism and street photography), no other branch of consumer electronics respects the old ways quite like audio. And few express that respect so well as the South Korean company, Allnic Audio.

Allnic’s new H-5500 phono stage (which replaces the popular H-1202 in the line-up) is designer’s Kang Su Park’s entry-level model in a three phono-preamp range. It’s important to get that out the way early into the review because you’ll never, ever, be able to say ‘entry-level’ about a phono preamp like the H-5500, and while this model is effectively a revised version of the H-1202, from look, feel and performance standing this is a more upscale proposition. 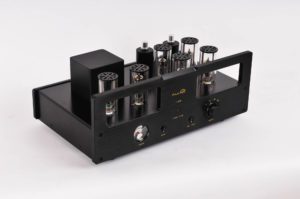 The obvious change is the exterior. The original H-1202 was a stubby design; still a very well-produced and solid piece of work, but the H-5500 adds some extra width to the all-aluminium chassis and includes styling cues from other models in the Allnic preamp line. More than that, however, it gives the H-5500 more of a solid look and feel that makes it fit right in with any 19” audio equipment, something the H-1202 lacked a bit. In addition, the H-5500 features the meter/valve diagnostics front panel meter and the iron/nickel Permalloy-core step-up transformers from the top H-7000 and H-8000 models, as well as a higher-spec power transformer. However, the H-5500 retains the zero feedback, pure Class A circuit design of its predecessor (no bad thing, as moving to an LCR or Directly-heated triode – DHT – phono stage would significantly increase the cost of this model).

There’s a tidy amount of flexibility in the H-5500, as it comes equipped with two MM and two MC inputs (twice the number found in the H-1202), so those with decks that sport multiple arms need not invest in multiple phono stages. Moving coil load settings are adjusted with two pots that stand proud on the back of the top plate. These settings are each locked to a specific gain factor; while some would prefer to adjust load and gain independently, in reality there is a lot of sense in doing this, as most 278Ω loads are going to be ‘high-normal’ gain, and most 29Ω cartridges are likely to be quite low gain. Given there is 40dB of gain as standard and the settings allow for up to 32dB of additional gain, this allows for some seriously low output cartridges to be used without any significant intrusion of hiss. There is one adjustment tower for each channel, but the setting will need to be adjusted each time you change MC inputs. Given the sheer number of inputs, having a choice of EQ settings beyond RIAA might prove useful, however.