Arcam has been through a turbulent few years. In 2012 it became a subsidiary of Canadian conglomerate JAM Industries whose main fields are pro audio, music, and lighting. Five years later Arcam was bought by Harman to join brands including Revel, Mark Levinson, and JBL. So in under a decade, what was once little old A&R Cambridge has become part of a global empire that’s ultimately owned by Samsung. So, it’s no wonder that this integrated amplifier looks and operates rather differently from the Arcam Alphas of yesteryear.

In truth, the SA20 doesn’t look that different. It costs a lot more than a 1990s Arcam Alpha of course, but what has really changed is that there is a fairly powerful processor at the heart of this amplifier. I’ll start from the top: the SA20 is the bigger of two integrated amps in Arcam’s latest HDA range, sitting alongside the near identical SA10, but offering 90 Watts/channel rather than the 50W of the more affordable offering. There is also the CDS50 CD/SACD and network player in the range but that’s it, no DACs or dedicated streamers yet (they are in the popular rSeries though). As with Arcam’s two-channel FMJ amplifiers, the SA20 has a Class G hybrid power amp section, which operates in Class A up to 12 Watts then switches in an additional power supply that produces Class B for situations that require greater power. The difference between this and a classic Class A/B design is that there is a transition area where both power supplies are operating which is claimed to eliminate the crossover distortion that typifies the latter. It’s worth noting that both power supplies are linear and that Class G is not a new thing; the theory dates back nearly fifty years, but it is complicated to implement successfully. 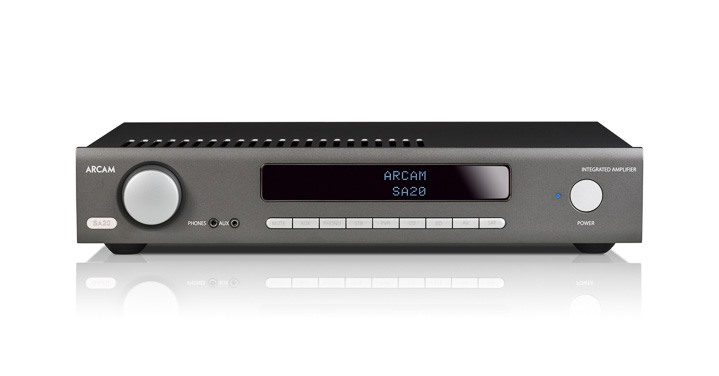 The SA20 has an on-board digital to analogue converter that runs a 32-bit Sabre DAC chip and has three inputs. Oddly given its 2019, it eschews USB, but includes Toslink and coaxial S/PDIF connections marked BD, AV, and SAT. Arcam is of the opinion that USB connections are not so much in demand and cite the positive commercial response to the CDS50 as a sign that disc spinning is making a comeback. Unusually there is a network socket for Ethernet cable and I had hoped that it might be possible to stream to this but it turns out to be for the purpose of IP control, such as you have in multi-room/custom install situations. There are three single-ended analogue inputs (marked CD, PVR, and STB) alongside an aux input on a minijack socket on the front panel. I’m surprised that the processor doesn’t offer the option to change input names given that they are displayed on a dot matrix (they are however printed on the buttons of both amp and remote). I note that one input can be set for use by an AV processor where the Arcam provides the front L and R channels in a home cinema set up. Finally, there’s also an MM phono input.

The processor offers a range of digital filters for the on-board DAC and a PDF on Arcam’s site explains how they work with a good degree of clarity. Switching between them requires you to use the buttons on the amplifier itself, which is surprising given that the remote handset has navigation buttons (for the CDS50). That said, there are plenty of variables including time to auto-standby, display brightness, headphone muting or not, and processor mode for a given input plus the required level for that input. It’s a clever box of tricks even if it’s hard to read the front panel buttons in some conditions.

The first thing that strikes you about the sound of the SA20 is its low end grip, which seems more powerful than is usually the case with a normal sized amplifier; clearly the power supplies are up to the task of controlling a set of bass drivers. It also has good clarity through the midband; mute trumpet for instance has lots of its distinctive texture and tone. Hi-hat is a little bit prominent with the PMC Fact.8 loudspeakers when used with the SA20 and the highs are not the very sweetest around, which is odd given the Class A element and the fact that I wasn’t playing at high levels. I was listening to a very new amplifier though and such things are known to calm down over time. It helped as well when I discovered how to stop it going into standby after half an hour. This result, however, was with an analogue signal; switching to a digital connection with the same source (Naim NDX2) resulted in a more open and snappier presentation that delivered Dave Holland’s double bass on ‘Veil of Tears’ [The Monterey Quartet: Live at the 2007 Monterey Jazz Festival, Sunnyside] in an appealingly tactile fashion with clear bass reinforcement from the venue and excellent image depth. Continued listening suggested that the digital input (coax) is not quite as relaxed as the output of a top notch streamer/DAC like the NDX2 but that’s hardly news; it’s a little bit more sharp-edged and that can make for a strong sense of acoustic space and ‘air’.

Using the same source via the analogue input is more organic, fluent, and well-timed, albeit still a little forward on dynamic peaks. However, there’s no shortage of power which creates a strong physical presence in the room. You get a strong sense of the electric on Ryley Walker’s Golden Sings That Have Been Sung[Dead Oceans]. This is not the most refined of recordings, so one suspects that the Arcam is just playing it like it is with a degree of clarity that such releases weren’t made for. Lee Morgan’s The Sidewinder[Blue Note]was nice and perky with good scale and plenty of drive, while Fiona Boyes can almost be seen sitting in the studio singing ‘If I Should Die’ [Professin’ The Blues, Reference Recordings]. Her voice pops out of the ether in such a way as to almost make you jump; this Arcam clearly knows what to do with a great recording. It’s one of those situations where having an open mid and top allied to strong bass makes the performance come to life in the room.

Returning to the coaxial digital input, the brightness is still apparent and there is a shortfall in timing prowess but detail levels remain high. I tried a couple of the digital filter settings that usually appeal and while differences were apparent the same essential character remained.

I also tried a smaller pair of speakers, another PMC in the form of the twenty.22 standmount. This combination produced excellent image scale and nearly as much bass extension with the bass guitar on a live track sounding fulsome yet taut and tuneful. I was coming to the conclusion that this Arcam is a decent but not particularly inspiring amplifier when I decided to try the two speakers that are also in this issue. The Audiovector QR5 made a rich and slightly thick sound in its hands, lacking the openness that they could deliver with pricier amps but producing decent low end gravitas. Switching to the similarly priced but more diminutive Russell K Red 120 proved rather more rewarding, perhaps because this speaker times like a bad-ass and in combination with the SA20 delivered a fabulously live and engaging sound the like of which I wouldn’t have credited it capable of.

This all goes to show that it’s all about getting a good match  – that being said, the Red 120 sounded much the same with my regular amplifier but that combo costs about six times the asking price here. Joni Mitchell’s ‘All I Want’ [Blue, A&M] was a little hard through this Arcam/Russell K combo and sounded like they were pushing the limits of the mics, but at the same time incredibly immediate and engaging. The vagaries of the balance had little or no impact on the obvious brilliance of the performance. Likewise the Ryley Walker album mentioned earlier proved nigh on impossible to put down thanks to the live feel of the presentation.

There may be other speakers that let the Arcam SA20 get to the heart of the matter as well as the Russell K, and there will be those who prefer a less explicit presentation, but it’s good to know what it can do when well matched. There is a lot of strong competition at this price but the mix of digital and analogue inputs, multiple filtering options for the former and the high quality execution of the SA20 bode well for the brand’s return to the forefront of British audio electronics.