Owning a Totaldac product is like an audiophile badge of honour. You fought valiantly in the Mainstream Wars and this is your reward. It will never be That Brand Everyone Knows because it’s just too ‘tweaky’ for the poor schlubs who just buy the normal stuff, and yet it’s not deliberately obscure. It’s digital done right, and that filters out the brand-obsessed. To buy a Totaldac product means you are an individual; almost a feet-astride, chin-in-the-wind Ayn Rand-style hero, only without all the neocon mansplaining.

To even describe the d1-core you own requires some discussion, which is best entirely side-stepped by saying “it’s the right one for me!” You didn’t get DSD (DoP) replay as just another acronym on the spec-sheet; you put it there. Streaming was your choice. Those BNCs were your decision, and the bass-boost circuit and the heavy aluminium front panel… yeah, you chose them, too.

The ‘core’ part of the name is one of the few things in which you, the end-user, don’t get a say. In a world of off-the-shelf chips and full digital application notes boards used as end products, that ‘core’ is ‘key’. The Totaldac core means a custom-designed R2R (or ‘resistor ladder’) DAC, sporting 100 Vishay bulk-foil resistors. These were chosen because of their 0.01% tolerance, although this makes for a very expensive DAC. This puts the Totaldac in with some very lofty company. Vincent Brient of Totaldac was one of the first and remains one of the leading-lights in the R2R world (others often build a R2R DAC out of chips, rather than the ‘no-retreat, no-surrender’ true resistor-ladder array approach), and his discrete components approach remains a world-class option. Others can fashion a DAC out of a clutch of DAC chips working together, lines of code on a FGPA, or even monolithic resistor-ladder chips, but only a DACmeister like Brient goes the whole hog and builds a fully discrete resistor-ladder DAC.

Our review sample came configured in the way apparently most d1-cores are configued today; the d1-core DAC with embedded streamer board, which brings UPnP, RoonReadyness, and Airplay to the basic spec. We also included a DSD replay option, and the USB GIGAFILTER cable to connect the streamer to the DAC itself. The entry-level d1-core essentially becomes three (well, four if you include the power supply) boxes in one; streamer, reclocker and DAC. 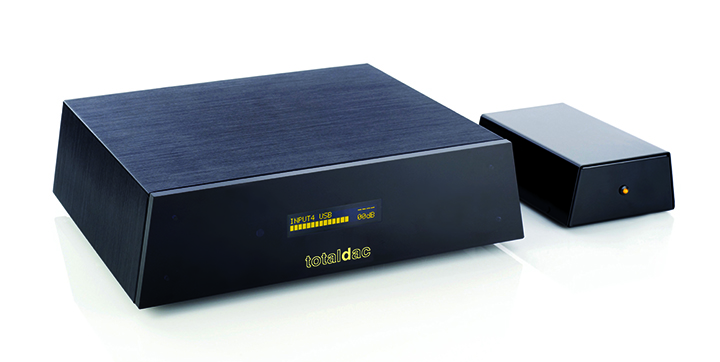 The use of the GIGAFILTER cable is the measure of the DAC itself; where most would connect the streamer card to DAC using an internal bus connection, Totaldac takes the streamers reclocked output as a USB datastream to be input to the d1-core’s own USB input. The operating system for the streamer can be upgraded by microSD. The online manual for the streamer is comprehensive and will guide you through the set-up and basic operation, but it’s pretty black-belt stuff by today’s ‘just use Google Home’ standards.

It’s worth the effort, though. The DAC sounds just fantastic. It’s one of the most natural-sounding, almost vinyl-and-valve like converters you can get for the money and beyond. I ran the DAC both as a DAC and as a streamer in its own right, but primarily as a DAC for Naim Uniti Core and the Innuos ZENmini Mk 3/LPSU music server combination tested in this issue. Both worked extremely well, although you could go a lot further in the server stakes and still the d1-core would not run out of road.

The first thing that struck me about the d1-core was a sense of harmonic richness and musical structure that analogue systems seem to do effortlessly, and digital often struggles to achieve. It also resolves a lot of spatial information, throwing out a soundstage that is big and muscular, but also deft and subtle.

If you think this is some rose-tinted fake-analogue sounding DAC, that’s not the case at all. It just has that same ‘you are there’ realistic quality to the sound that is often associated with good vinyl. This comes across so well with something like ‘Pale Blue Eyes’ from the last Velvet Underground studio album [The Velvet Underground, MGM]; the purity and simplicity of the track, coupled with Lou Reed’s  plaintive, almost broken vocal, makes the song take on a degree of beauty it rarely displays except on vinyl.

Time and again, it was the naturalness of the recording that pulled you in. It’s not a ‘smoke and mirrors’ trick, and the d1-core isn’t smoothing every recording over; playing ‘You Gotta Roll With It’ from Oasis’ massively compressed 1995 LP What’s The Story (Morning Glory) [Creation], the d1-core did not hide the thin, loud, and brash recording style, but it also teased out as much music as its possible to extract from a wall of ‘loud’.

It’s on more well-balanced music where the d1-core really shines, however. Paul Galbraith’s Bach Sonatas & Partitas [Delos] is a remarkable transcription for an eight-string guitar played like a plucked cello. They are both well-thought out and very well recorded, and through the d1-core it’s total goose-bumps time. The guy is there, physically in the room with you, with none of the artifices or mechanics of stereophonic sound in the way. Or rather, any such constraints are functions of the rest of the system rather than the DAC itself. It’s just music, with all its texture, vivacity, and colour. This also shows the DAC to be extraordinarily detailed, exposing in the process the lie about this being a deliberately softened sounding DAC.

The d1-core’s dynamic range isn’t quite as remarkable as its naturalness, and this comes across as a lack of scale and solidity to Mahler’s Eighth Symphony [Solti, Decca]. The staging is generally very good, reproducing the huge hall filled with musicans well, but the crescendo doesn’t quite blow the doors off their hinges. Other DACs are more dynamic, although many trade range and scale for timbral honesty, and – while I’d like both – I’d go with the honest approach.

The best of all possible digital worlds in Totaldac-land is to bypass as much as possible upstream, and that means using the Totaldac’s playing files from a thumb drive slotted into the converter itself. Think of this like inserting a CD to play an album, rather than trying to squeeze your whole CD collection into the same player at once. Yes, it’s more fiddly and that flies in the face of the fingertip convenience of modern digital audio, but it works. This is the best sounding way of playing digital audio, in terms of stability of image, and just focus to the sound. Impractical, yet fabulous… it’s the audiophile dream!

There’s another feather in the Totaldac’s cap. The d1-core is ‘merely’ the base model in a seven-strong range of converters, and fully upgradable too. Of course, moving up to the d1-twelve mk2 requires separate mono DAC boxes with a separate reclocker box, and a lot of power supply boxes. It also requires changing that single ladder array to six arrays per channel, and something close to €30,000… and this would be even better with a dedicated d1-streamer and d1-player, cables, and so on. In reality, the next step up is a more managable jump and brings twice the DAC and yet more flexiblity .

A Totaldac is not high-maintenance, and it’s not so ideosyncratic that it will only appeal to a really narrow band of audio enthusiasts, but neither is it a universally applicable recommendation. Normally that would be a bad thing, but here it’s more of a ‘many are called, few are chosen’ design.  Put it this way; if you think digital audio is an immediately-impressive sound in a very shiny box, look elsewhere, but if you are as uncompromiing in your playback as Vincent Brient is in designing playback equipment, you might have just found your next DAC.

Win! One of three pairs of Final B-Series Universal-Fit earphones