Synthesis is an Italian electronics company with a strong emphasis on valve designs, and an equally strong bias toward value for money. The range is comprehensive, with more than 20 models across four separate ranges (and more to follow). The Soprano and Soprano LE integrated amplifiers represent the entry-point for the brand.

The Soprano is a small, elegant, and somewhat minimalist integrated amplifier with a solid-state preamp stage and a 12-watt valve power amplifier section that uses a quartet of EL84 valves. The EL84 is perhaps less well-known in domestic audio circles compared to the more powerful EL34, but the little EL84 power-pentode is a popular choice in some guitar-playing circles, most notably for the ‘chimey’ sound of the Vox AC15 and the Marshall ‘Model 1974’ combo amps from the 1960s and are still highly prized today. The Soprano amp includes a built-in AKM-based DAC that supports PCM audio to 24‑bit, 192kHz precision (on USB; 24/96 on optical and coaxial S/PDIF), and a MM phono stage; moving coil cartridges and DSD are not supported, although given the relative affordability of the Synthesis, it seems unlikely that it will be partnered in systems where the absence of a MC input or DSD replay will be a problem. Similarly, the lone line input might have been a stumbling block in the days of separate CD player, FM tuner, and tape recorder, but I suspect that most Soprano amps will be used with a record player and a laptop, and for the most part, that’s how I used it. 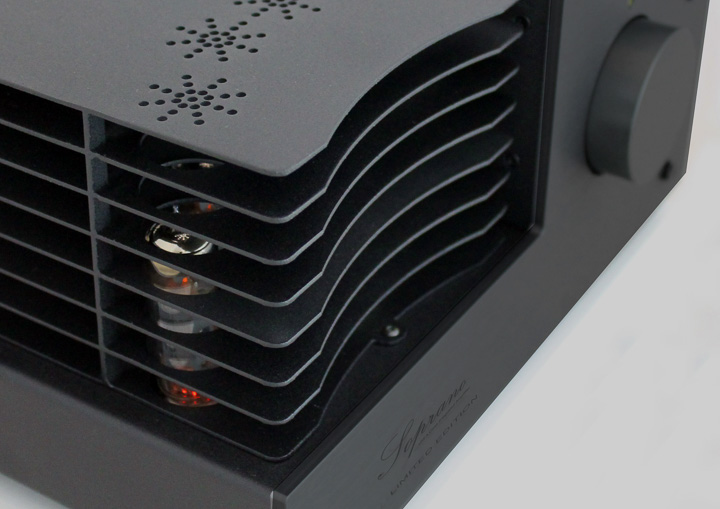 The Limited Edition version of the Soprano is restricted to just 200 pieces. It differs from the standard version in terms of finish (the brushed aluminium or black front panel is replaced with a more refined titanium look), higher quality RCA input and loudspeaker output terminals, and a limited-edition plate with designer and owner Luigi Lorenzon’s signature (and a certificate of ownership). More significantly, the power has been upped from 12W to 15W per channel.

The four EL84s sit to the left of the front panel, glowing away nicely, but kept from prying fingers by a horizontally-vaned, black powder-coated protector/heatsink that runs the length of the amp (it’s removed with two small Allen bolts, but actually looks good in situ). Controls are limited to five small push-buttons (with accompanying LEDs) for channel selection, and a larger push-button for power, plus a remote eye and a larger power LED above the remote control. The whole unit is narrower than most modern audio and, combining that with the titanium front fascia of the LE, gives the Soprano a timeless and classy appearance, akin to classic Quad valve devices of the 1950s.

Affordable valve audio equipment is usually dismissed with a flourish by the cognoscenti for being either badge-engineered off-the-shelf Far Eastern products, or ‘designed in Europe, built in a sweatshop’ designs. Aside from the somewhat banal nature of this gripe (especially when it arrives typed on a laptop or smartphone designed in the US and built in Asia), it’s simply not true here. Every single piece of the Synthesis range is designed and built in Italy. Not ‘assembled’… built. Managing to build both up to a standard and down to a price is difficult and admirable, but it’s something that Synthesis does well, and the Soprano LE is the result. In fact, were it not for the very slightly clunky feel of the push-buttons, the light touch to the volume knob, and a remote control that is functional but lacks the ‘blunt instrument’ heft of the big-boys in the audio world, you’d put the Synthesis Soprano SE close to £3,500 or £4,000.

You’d make the same mistake after powering it up, too. OK, fifteen watts per channel is not what you’d call a ‘powerhouse’ and that places constraints on the listener in terms of loudspeaker efficiency. Any loudspeaker with a genuine sensitivity figure in the mid-90s or above is perfect, and those in the 88-95dB sensitivity range will be conditionally fine (depending on room size and ultimate listening levels). The Fyne Audio range (such as the F702 tested in last issue) would make a perfect combination, for example. Also, the amplifier goes ‘creamy’ and slightly ‘chimey’ (harmonically rich in the upper-mids and treble) rather than ‘edgy’ as it reaches its limits, so the occasional wig-out at volume is possible and actually quite enjoyable.

This is very much a ‘grace’ and ‘space’ amplifier; it also does ‘pace’ well (Lorenzon listens to a lot of rock music both in development and for his personal enjoyment, so he wouldn’t let a beauteous but rhythmically flabby sounding amplifier leave his test-bench), but what first attracts you to the Soprano LE are its rich, harmonic textures, fine detail retrieval, and exceptionally well-shaped soundstage; not too big, not too small.

Like many reviewers faced with a relatively low-powered integrated amplifier that doesn’t cost as much as a moderately-successful racehorse, the listening session commenced with something of a soft start – ‘Help Me’ from Court and Sparkby Joni Mitchell [Asylum] – as this is not a densely populated mix and Mitchell’s voice is so well-known it’s easy to determine whether the basic boxes are ticked. And they were ticked, and ticked well; so well, in fact, I played the track three times in a row, running from the USB input of the DAC, from the line input and from the MM phono stage, playing an early pressing. In all three cases, it sounded at once extremely natural, very rich and enjoyable, and consistent from source to source. I preferred the vinyl version the best and the ripped to computer version the least, but that itself is consistent with my findings elsewhere. 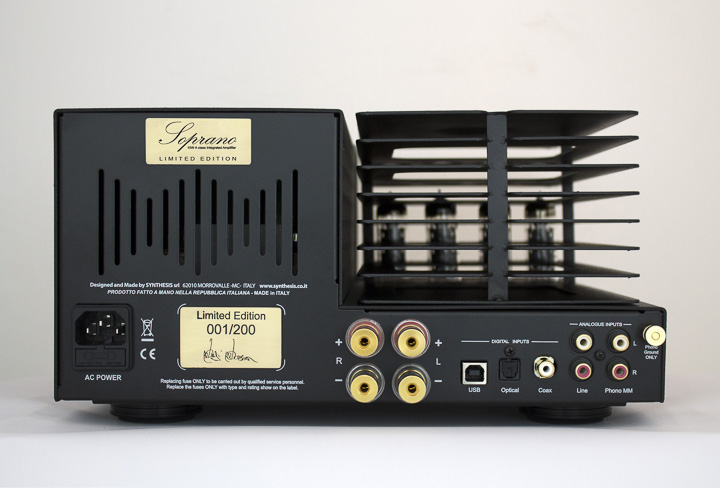 Having passed the recruit fitness test, it was time for basic training and review bootcamp. I marched out my usual range of recordings in order of difficulty. And the Soprano SE passed the test each and every time. OK, so this is not the first choice for anyone who thinks ‘dynamic range’ means ‘playing Mahler at window-shattering levels’, but what was surprising is just how much dynamic range and bottom end energy can be extracted from 15 watts when done properly. I have almost worn out the digits on Trentemøller’s ‘Chameleon’ [The Last Resort, Poker Flat] because of the intensity, speed, and depth of those stentorian notes mid-way through the track. Granted none of these sounds exist in nature, but they are a perfect indicator of bass depth and precision; if a sub-40Hz tone produced by a PCM-based synthesiser (that is as close to a square wave as it’s possible to make without destroying a loudspeaker) is perfectly rendered, it follows by inference (and confirmed by listening) that the same applies to tympani and deep organ pedal notes. And on playing ‘Chameleon’ the Soprano LE did exceptionally well, defining the attack and release of the bass notes perfectly, all the while not undermining the range of sounds in the mid and treble.

I’d hesitate to say this is the most neutral amplifier you can buy because the sound it makes is so sublime and satisfying. Any yet, neither does it go for the warm ‘comfort blanket’ sound of over-rich valve amplifiers. In short, it toes just the right balance. In fact, if the Soprano’s harmonically rich and elegant sound, plus its exceptional imaging, represent a deviation from strict neutrality, it’s a deviation that I’m sure many will happily go for. This also means the Soprano covers its tracks well, too, because you are enjoying the sound too much. In other words, it’s a lovely, sweet-sounding amplifier that makes you want to listen to music more… who really cares if that is not strictly accurate?

Perhaps the biggest plus-point for the Soprano LE sound is its ability to ‘scale’ well. Put something fey and small sounding its way [Feist’s ‘Mushaboom’, Let It Die, Polydor] and it will make it seem small, close, and intimate. Then flip over to a huge wall of sound [Muse’s ‘Invincible’, Black Holes & Revelations, Helium-3] and you can almost hear the stadium (or a haunted house ride full of sci-fi skyscrapers and evil pumpkin teddy bears, if you watch Muse’s crazy video). That ability to move from the tonsils of a breathy girl-with-guitar singer to a large orchestral piece, to post-modern progressive rock with a distinctly sci-fi feel is the mark of something really good, and the Soprano LE does it so very, very well.

We haven’t compared the Soprano LE to the more commonplace non-LE version because the price differential between standard and LE is relatively slim, meaning there’s almost no point looking at the Soprano right now. Maybe when the 200 LE models are sold, we’ll revisit the Soprano in its standard guise; as it’s possible the great sound of the LE is built on the similarly great sounding foundation of the Soprano itself.

Regardless, the Synthesis Soprano SE is a lovely little amplifier in its own right, and those 200 owners will be getting something truly magical. If your speakers are sensitive souls, they will thank you for letting them work with so refined a Soprano.