Since Riva first hit the streets with its Turbo range of Bluetooth speakers, there has been something of a buzz about the company. Part of that might be the backbone of Audio Design Experts, Inc. (or ADX, for short), with a dream team of former rock’n’roll impresario Rikki Farr and audiophile überengineer Donald North. But ultimately it came down to the products themselves, which delivered more of the musical goods than it should have been possible to achieve, given the size of products and the costs involved. These little gems have been used everywhere by enthusiasts, even to the point of one of them winding up in the cabin of the cars of several members of the team as both music and phone device.

There’s a limit to Bluetooth technology, though, and in the home there are better paths up the same mountain. Although Bluetooth can sound relatively good now, it’s still a limiting factor in performance, especially in a home context. Apple provides a potentially better solution in AirPlay, but not everyone wants to be involved the Apple ecosystem. Another useful solution is Google’s Home and/or Chromecast systems. These are chronically under-appreciated by the audiophile community, but – used wisely and appropriately – they can be an affordable and surprisingly high-performance musical pathway to access music both in the home and online. I guess the resistance by the audiophile community is that anything that cheap and that easy to use just can’t be any good! 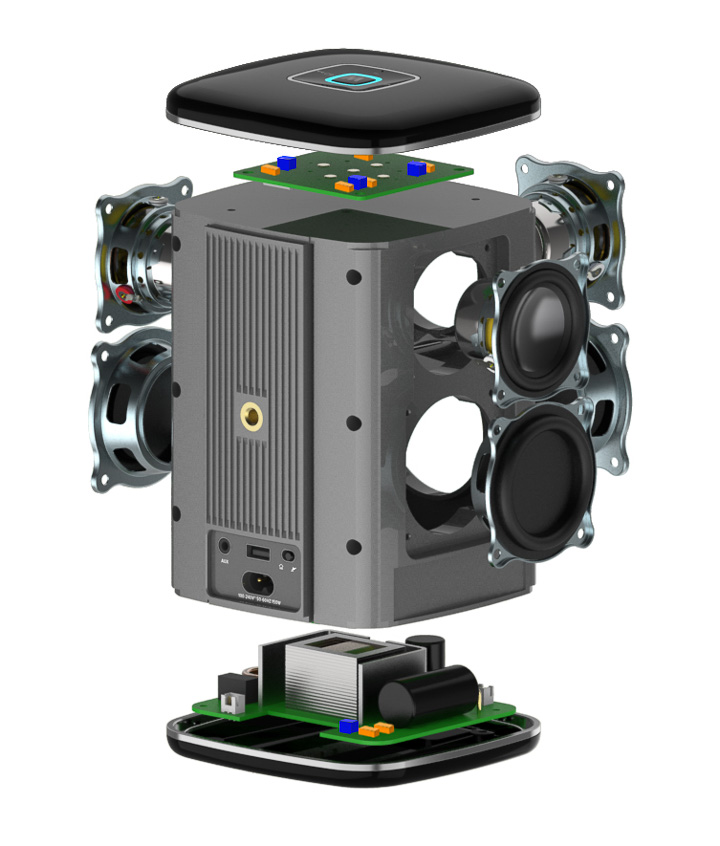 Riva’s new WAND system takes full advantage of the power of Google. There are two models in the current WAND line-up; the Arena tested here, and the larger Festival model. There is likely also a subwoofer waiting in the wings. Like the Turbo models that launched the brand, both models use the company’s patented Trillium DSP system to create a stereo sound from a single loudspeaker, but the Arena is larger (somewhere between the size of a large desktop loudspeaker and a small standmount monitor) and can support up to 24bit, 192kHz resolution.

The Arena comes mains powered as standard, but there is an optional battery pack that fits beneath the standard box, which is good for 20 hours if you play carefully and quietly. This snaps into the base of the Arena and is charged through the Arena. It also allows the Arena to charge phones or tablets while playing (with a concomitant drop in playing time).

Arena gets clever, fast. First, it has an inbuilt Chromecast device, which brings all the benefits of that device to the Arena without having to worry about lost or broken dongles. This also gives the Arena an ‘away’ mode, allowing a multiple network of loudspeakers without an available Wi-Fi network.

Chromecast also allows you to access the WAND devices through a range of different options. If you have a smartphone, through one of about a dozen apps. If you have an Android phone, make that about two dozen apps. If you have Google Home, you are good to go, too. There’s also Riva’s own WAND app, although this is more for operational features. It’s ever so slightly easier to access music streamed from online services like Google Play Music or Spotify than it is to access local network streaming, but ‘easy’ here is a very plastic term – ‘easy’ in RivaWorld means you probably don’t need to do anything apart from plug it in and make Google go now! Accessing your local network might involve entering a password and some navigation on the app. But basically, so long as you remembered to join the second decade of the 21st Century before you plug the Arena in, everything should be plain sailing. 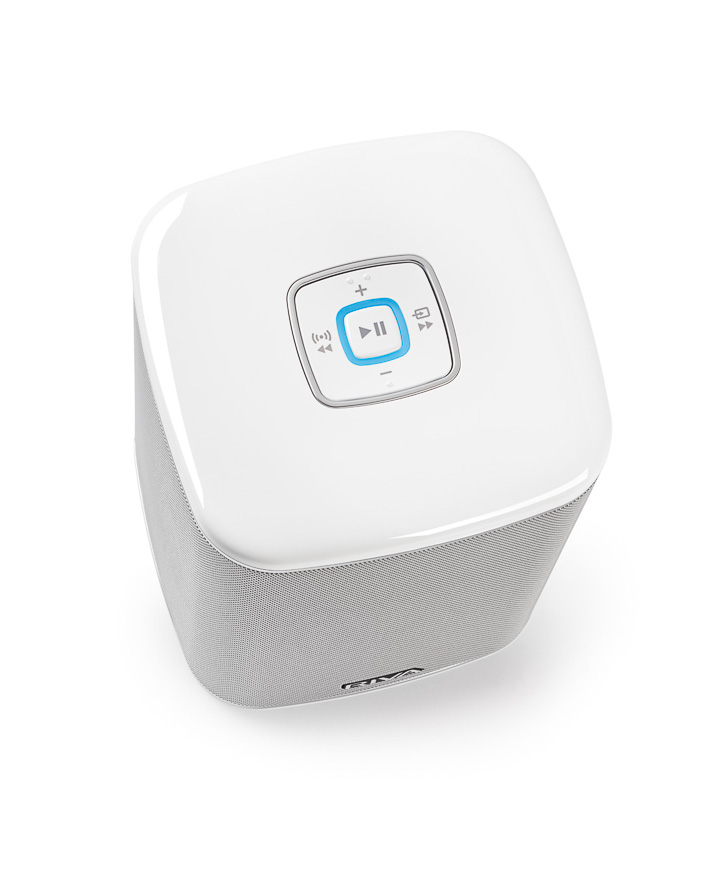 We’ve accented the Google side of things because they are important, but the Arena speaks most computer tongues, too. It supports conventional Wi-Fi, Bluetooth, Apple’s AirPlay, DLNA, and DDMS (a port-forwarding, radio-state information debugging system unique to Android). Bluetooth means if you went down the Amazon Echo route instead of Google Home, you should still be fine because it will talk to an Amazon Echo Dot. It also allows Spotify Connect, and there’s even a 3.5mm analogue line input jack.

Where it gets fun from here is adding more Arenas, or Festivals for that matter. If you have two of them, you can easily have them as dual zones, or have them work together as a stereo pair. This sounds trivial, but is devastatingly difficult for many companies to deliver because even the smallest latency between the channels ends up making the music sound like it’s being fed through reverb. A combination of leveraging the power of Chromecast, and Riva’s WAND app makes that latency just go away. You can flip between two single-speaker stereo systems and a left-right channel stereo set-up in an eyeblink if you like. Try that with any other system and see just how advanced this is.

Even this is not the end of the fun and games, as the Riva system allows for at least 30 devices across a number of zones. How many zones precisely? That’s difficult to tell unless I ask Riva nicely to send me a further 50 different WAND devices, but unless your living environment ends with the word ‘Hotel’, you are probably unlikely to run out of zones fast.

I had hoped to use the Arena as an outdoor loudspeaker playing music to friends and family while enjoying a nice barbecue and a few drinks in our back garden, but I forgot to factor the Great British Summer. The Arena is stated as ‘splash resistant’, which doesn’t cover the downpours and monsoons this summer brought. There were brief pockets of almost-sun that led to impromptu events, and the Arena shone in all of them. With a potential for 101dB sound pressure, it’s more of an outdoor speaker than a PA system, but as a portable music zone both in and around the home, it’s truly excellent. 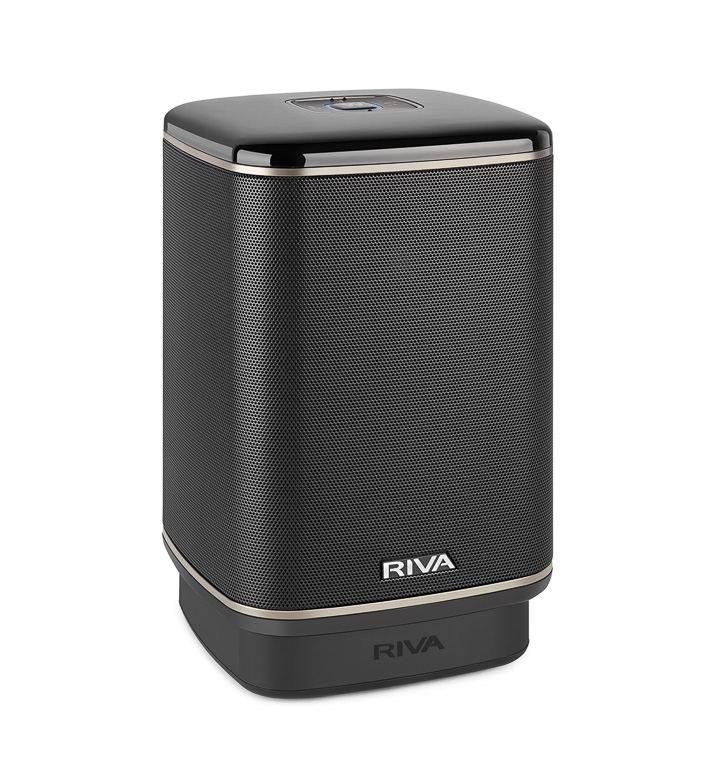 You can tell that the Riva design team is audiophile-directed, because this little speaker is designed to sound good. OK, so it’s not designed to replace a full system – it’s more of an adjunct and introduction to great audio rather than a replacement. But it’s surprisingly entertaining, and deceptively powerful. It delivers a realistic 50Hz-20kHz, and even if that bottom figure is more about perception than actual bone-shaking bass, it’s still there, still entertaining and still a lot of fun to listen to. Best of all, it’s light, fast, and pacy, without edging over to overt brashness or hardness.

Musical examples abound, but not in the conventional ‘soundcheck for soundstage’ manner. The Riva Arena is all about putting the fun back in music, and it does that beautifully. You end up playing Sister Sledge or Chic, and then you play Black Sabbath or Focus. Maybe you throw in some overproduced 1980s pretension or some stinging, banging techno for the hell of it. Then perhaps you chill out with some Miles Davis or Bill Evans. Maybe you bounce the iPad round from person to person playing a game of musical ping-pong, which can stretch into the late evening, and end up in some very strange musical places.

In absolute terms, the loudspeaker has a fair sounding bass, and stays well clear of the exaggerated boom-tizz sound of some of its similarly priced rivals. It has a good midrange, too, with some useful vocal expression and refinement, and the treble stays on the right side of ‘harsh’, all of which combine to make a portable speaker that sounds more like a traditional audiophile-friendly design. Stereo is less strong from a single box, but the remarkable thing about the Arena is you only notice this when moving to stereo ‘proper’. Listening to it in its own right, there is a sense of a sound outside of the boxes, with good stereo separation and even some stereo depth and width, which is amazing given it’s all coming out of one little box! 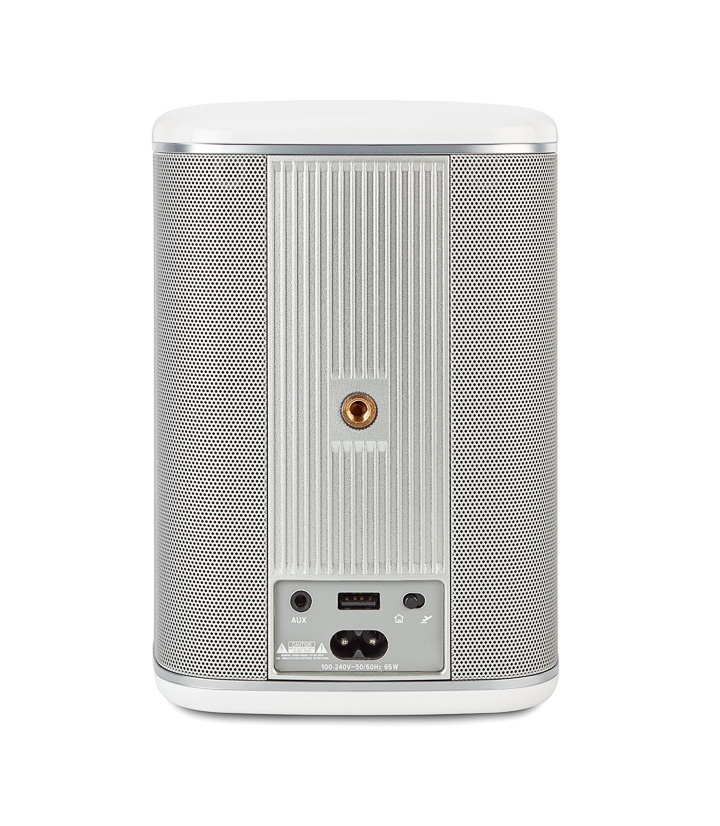 The Riva Turbo speakers revolutionised travel sound for audiophiles. Suddenly, you could take a small loudspeaker with you that made a sound that you didn’t feel compromised your listening pleasure. I know of many that flit from hotel room to hotel room, owned by people passionate about music and on the road to help pay for their big audio system at home. The WAND concept extends that travel idea to around the home. It delivers the kind of sound that is more than acceptable to even the most snobbish of audio enthusiast. It’s fun, flexible, fun, reasonably priced, fun, sophisticated, fun, and fun. If only the British weather had held out, I’d have used this speaker time and again. Check it out!