Gold Note’s extensive range of products are less well known than they deserve to be. After you read this review of the Gold Note PH-10 phono stage – and especially when you read the price of this component and what it has to offer – you’ll wonder why the company doesn’t receive more top-line recognition.

The PH-10 is a decently sized black or silver box with a knob, a small screen, and a logo that looks like it should be a Roman coin. The logo is reiterated on the top panel and as a watermark on the screen. Through a series of turns and pushes of that one knob, you can navigate a surprisingly deep and rich series of phono set-up and use options, far above the things you’d expect for the price. 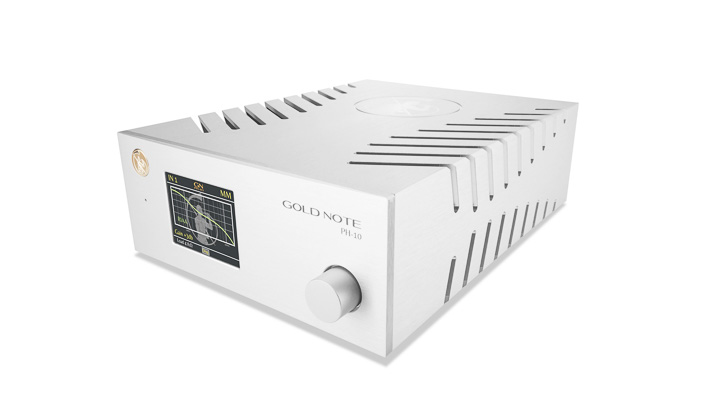 At this level, and often way beyond this price point, adjusting cartridge loading or gain is performed by adjusting a series of DIP switches. Lose the manual or have the kind of long-sightedness that gets to almost everyone over 40 and that becomes a chore. Gold Note, on the other hand, make such adjustments easy, quick and simple. The PH-10 offers nine different load impedance options and four levels of output. You have two phono inputs, and the option of balanced or single-ended output, and there is even an optional valve power supply (not supplied) and a range of other upgrades including an EQ curve enhancer, gain stage enhancer, and an optional valve output stage. There’s even a USB port for upgrades.

The really clever part is using that 2.8in TFT screen to navigate the options open to you, by scrolling round the screen itself. Top left corner, you have the choice of cartridge input. Top right, the ability to switch between MM and MC in very broad terms. Bottom left, load and gain options, then the option to turn the display off, and whether optional cards and power supplies are fitted. In between all these is a representation of the EQ curve used, and yes… you can switch between RIAA, Decca, and Columbia curves. The optional enhancer, as the name suggrests, allows you to tweak those curves slightly.

In short, this is not some fit-and-forget phono stage made for someone getting into vinyl replay; it’s a serious and upgradable phono stage capable of incredibly fine-tuned performance, and precision of both input and EQ curve. As it’s all adjustable on the fly, the PH-10 affords the listener the chance to delve into their earlier record collection to try and choose the right curve. This is a bit of 2017 controversy, with some thinking that the moment stereo came about, pressing plants switched over to the RIAA curve en masse, while others point to recordings made into the mid 1960s that might have been cut on lathes working to older curves (especially Columbia, it seems) given there is anecdotal evidence to support both sides of the argument, and that sadly most of the people who were driving those lathes at the time are no longer with us, this is likely an argument that will never see full resolution, but given the chance I am willing to experiment with different EQ curves and the differences can be very noticeable.

It’s here that I would like to recommend an upgrade for the PH-10, one that might be buried in its optional plug-in cards. I think there are those for whom even two cartridges are not enough, and they would love to tangle with their right cartridge for the right record and the right EQ curve – those who use VPI arms with more than one arm-wand for example. For such people, I’d love to see a means whereby a number of cartridge loadings and possibly EQ fine-tunings could be stored and recalled for later listening. I must admit this is less for me than it is for people I know whose record collecting doesn’t just border on the obsessive; they have made their home in camp OCD and become citizens of Compulsivia. Actually, I can see the store and recall preset option being pretty useful for reviewers, too. 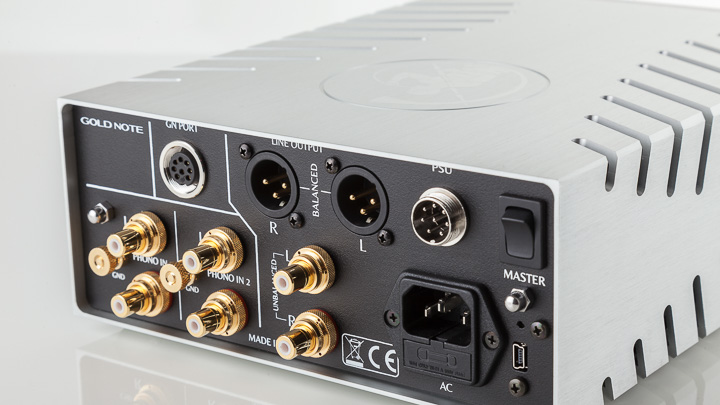 In use, the PH-10 is an effortless record-playing companion. It doesn’t grumble, complain, or have a hissy fit if left on for too long. It does get a little warm in use, but not to the point of great concern. It is slightly odd the first time you turn out all the lights in the room and this eerie red glow eminates from the vents, but it’s not distracting in normal use. I actually prefered it with the screen on rather than off, although I suspect it sounds fractionally better with the screen off. It certainly benefits from several hours quietly playing music to itself, even to the point where a reverse-RIAA feed from a CD player on repeat would be a good burn-in tool.

If I am being truly honest, I am not the ideal reviewer for a tool this flexible. I’m more of a ‘set it, then forget it’ guy, but I do appreciate a good, thorough set-up procedure. And then I want the device to perform flawlessly. The Gold Note PH-10 did both extremely well. Setting two cartridges – one an Ortofon MM and the other a Lyra MC – was a little like safe-cracking (two turns to the left, click, three to the right, click), but the screen made things move fast (if you know your cartridge’s settings, otherwise it’s a lot of trial and error) and I had two good cartridges ready to roll in a few minutes.

And then it came to the listening. For some reason, I expected something of an extreme, either extremely soft-sounding or very harsh and hard-edged. In fact, I got neither of these things. What I got instead was a fast, accurate, and very detailed phono stage that is whisper quiet. That last is key; this is one of the quietest phono stages I have experienced at anything close to this price tag – just the faintest white noise unless you go crazy with the volume control.

The speed of the PH-10 also surprised me. Digging into my past, I pulled out Surfer Rosa by the Pixies [4AD]. On ‘Where Is My Mind’ the Pixies’ famous quiet-loud dynamic requires a phono stage that is quicksilver fast and extremely dynamic, and the Gold Note aced this test superbly. You know it’s good when it reminds you of the end of the 1980s, and not the ending of Fight Club, but let’s not talk about that.

I was a litle concerned that a product with multiple EQ curves could be a Jack of all Trades, especially as many of the phono stages I have liked in the past have used passive RIAA circuits. But I needn’t have worried, this is no Jaco of all Trades, as I stuck on ‘Donna Lee’ from the eponymous Jaco Pastorius album [Epic], any hint of deviation from the RIAA curve would be picked up by listening to his fretless bass and impossibly brilliant playing (bass players I know swear he had at least 18 fingers and three arms hidden somewhere). The PH-10 picks up everything, and you can follow every line (note – follow, not understand… that takes a higher order of musical nous than is handed out to mortal man). The sheer mastery of Jaco’s playing can actually distract one from critical listening, as it’s almost too much of a good thing. In this case however, the PH-10’s high-speed abilities coupled with its accurate EQ curve helps make this track even more alive than I remember it.

The Jaco track also highlighted the mostly excellent soundstaging abilities of the PH-10. It throws a very wide and stable image out well past the loudspeakers, with just the central bass plus multi-tracked congas (one to the rear of the left channel, another more to front right). All these elements in the mix are right-sized and rock solid. It has a good balance too, not too forward into the mix, but not pushing back into a cavernous soundstage like a faux valve phono preamp. For the money in particular, this is absolutely spot on. 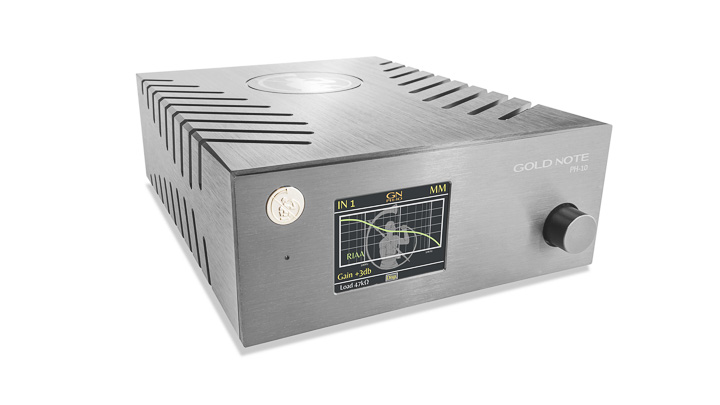 I like the fact that the Gold Note PH-10 fights way above its weight, creating a superb, well-built, and extremely flexible phono stage that is easy to use when you need it and yet is also capable of being tweaked and adjusted to even the most obsesive audio nut’s wildest dreams. I love the fact that even beyond this there are a whole series of upgrades that unlock even more options along the way. I’m more than happy with it in basic guise, however. If you are looking for a £4,000-£5,000 phono stage but have a niggling lack of £4,000-£5,000 burning a hole in your pocket, the Gold Note PH-10 might just be the ideal option.

Distributed in the UK by: Audio Pinnacle