PrimaLuna has been leveraging the best of the past for years, utilising the power of pre and power valve amplifiers from the classic era of audio. It has also made valve integrated amplifiers and valve CD players and now a valve DAC. OK, so it’s a digital converter with valves, because an all-valve DAC would take up a space the size of a small house and would require its own fire-fighting team to keep it from overheating in spectacular fashion, but you get my drift. There’s a common theme to PrimaLuna products from the outset and continues to resonate to today’s EVO line, of which the EVO 100 is the lone digital product.

The range was completely revised a year or so ago to form the EVO range. This was no small undertaking, scrapping a popular line and replacing it with no fewer than 13 new models in one single hit. EVO meant new transformers and new wiring for the amplifiers, and headphone amplifiers fitted inside the preamps and integrated designs. It also meant the end of PrimaLuna’s dedicated CD player, which sadly fell victim to the End Of Line disease that blights CD transport mechanisms today. However, it wasn’t the end of PrimaLuna’s digital aspirations, as the EVO 100 DAC has slipped into its place. And let’s not mince words here; it’s really slipped into the Prologue Classic CD’s shoes; the front panel is identical, just with different screen printing!

Under the hood, the EVO 100 DAC retains a lot of what was right about the Prologue CD players. This includes dual toroidal power transformers with noise-busting AC Offset Killer circuit for its dual mono layout, premium-grade output transformers, tube rectification using a 5AR4 tube, point-to-point wiring, two 12AU7 and two 12AX7 tubes in the circuit and… wait? Are we sure this is a DAC, because this sounds remarkably like the spec sheet of an preamplifier. In fact, that’s long been the key to PrimaLuna’s digital success; it effectively treats digital audio as simply another signal to be amplified where its relevant. Sure, the digital side is well-catered for with a Burr-Brown PCM1792A DAC chip and a Burr-Brown SRC4192 for 24-bit, 192kHz upsampling and it inputs USB, coaxial and Toslink as S/PDIF and XLR as AES/EBU so it’s well specified, inputs wise.

Keen-eyed digital watchers might think that last sentence contained a typo, but they’d be wrong. It does support USB as S/PDIF, converting the USB input almost immediately. The logic here is that USB is designed for file transfer, but S/PDIF is designed purely for music, so transcoding that USB signal is a good thing. PrimaLuna isn’t alone in thinking this way, but most companies seem content with staying on the computer side of the fence for longer. Regardless of input, the EVO 100 DAC supports PCM to 24bit, 192kHz, and supports to DSD64 on everything apart from the DSD128-chummy USB input. In the never-ending arms race of formats, this gets you on the first rungs of the high-resolution ladder, but those wanting top end performance (and XLR output… this is RCA single-ended only) will probably look elsewhere. In many respects, more fool them, because in their search for playing the unavailable and the unplayable, they miss out on something really great sounding.

Back to the specs. The EVO 100 DAC’s big hitter feature is its SuperTubeClock. This replaces the solid-state oscillator chip normally found in players and DACs at this level and replaces it with a Russian ex-military mini-tube. This was designed to control the avionics for late Cold War-era MiGs and Sukhois, so precise timing, good anti-vibration systems and an ability to withstand electromagnetic interference (more accurately, an electromagnetic pulse from a nuclear explosion, so dealing with the home is a breeze) were baked into these tiny, long life tubes. According to PrimaLuna, “triode tubes are inherently low noise devices, and extremely linear when used properly. This means that the oscillation frequency wave it produces is very pure and clean… When you reclock the inputs, any noise that is generated here appears unfiltered and unattenuated at the input of the conversion chip, and injects jitter, which from then on is an indistinguishable part of the digital audio stream. No amount of cleaning will ever be able to remove this noise once it reaches this point; it has become part of the audio signal.” In fairness, the full explanation behind this tube clock system is published on PrimaLuna’s US website (primaluna-usa.com/primaluna-evo-100-tube-dac) and is worth a read.

Instead, lets focus on the DAC’s performance qua DAC rather than its technology, good though that is. It’s an extremely simple DAC to use, thanks in part to that re-tasked front panel meaning two displays in one. The four buttons simply select the source, while a switch on the side powers the DAC up or down. That’s it. No filters or standard converter options, no headphone socket or variable output. Just good, solid, basic DAC replay.

If that’s all it does, it better do it well, and fortunately, it shines. More accurately, it doesn’t shine, it glimmers! In fact, it’s the antithesis of ‘shine’. This is the DAC you play to people who love music but don’t like the sound of digital. That being said, it’s still faithful to the original digital signal; it’s just that it portrays it with the kind of effortless and silken textures that we don’t normally hear at anything close to this price.

There’s a deep-seated feeling of refinement here, to the point where even slightly more would push it over to ‘lush’ or ‘over-romanticised’. As it is though, the EVO 100 DAC is just really, really easy to listen to for hours on end. On the subject of ‘lush’, perhaps the best way I can describe the EVO 100 DAC is this; what it does to music is what a couple of good gin and tonics do to most of us after a busy day. It’s not slurring or softened, it’s not even got that pleasant drunk-wobbly feeling, it’s just things through the EVO 100 DAC are, well, kinda nice. The world sounds, looks and feels better. It’s a ‘conversations with an old friend’ sort of DAC; not all ‘pipe and slippers’ or anything negative, just… Somewhere half-way down that second drink of the day kind of enjoyment. If we’re staying with the analogy, a lot of digital audio is just too ‘Jägerbombs’ by way of comparison.

By now, you’ll have probably spotted that this isn’t the sort of DAC that lends itself to hyper-analytical dissections of music, and it also doesn’t lend itself to over-analysis of its performance, which is odd because its overall performance is really pretty good. It has, as you might imagine given all that’s gone before, wonderful coherence, excellent dynamic range skills, a fine and accurate frequency range stretching down into the bass with precision and passion in equal measure, and it’s more than detailed and accurate enough to be egalitarian and catholic in its ability to process music of all kinds. It even has a reasonably good sense of rhythm and metre to its presentation, although this is probably more of a bonus than a headline feature; it might not ‘bop’ along or play music at a frenetic pace, but neither is it a ‘plodder’. 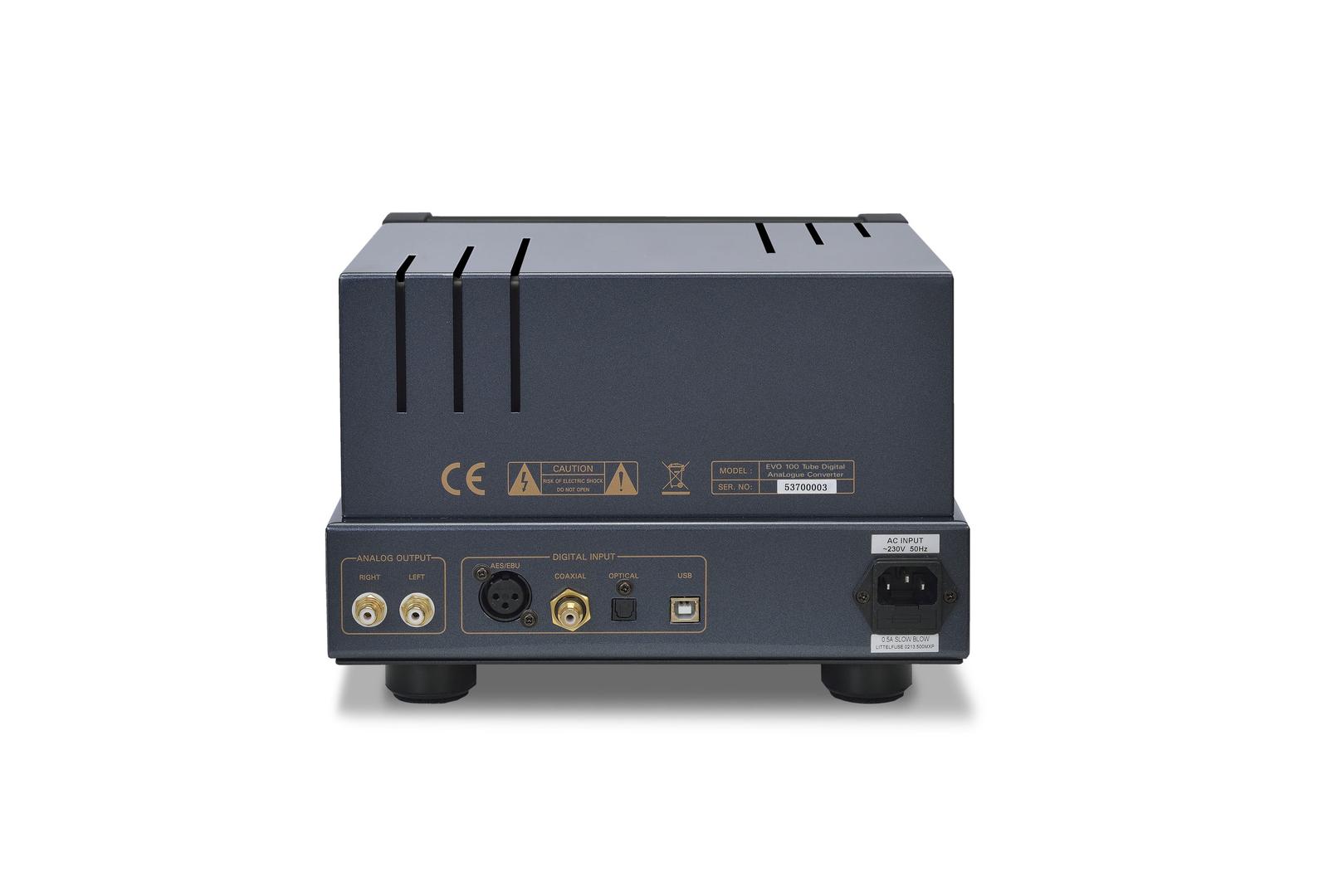 Stereo imaging is excellent, too, especially in terms of image height. If anything, the EVO 100 DAC is more about the depth than the width (no sniggering at the back), but unless you are engaged in close comparison, you will be unlikely to notice any reduction of stage width.

Most of all, however, the EVO 100 DAC is musically cogent. I’m trying not to make this seem like it’s some mellow sounding converter that’s only good for jazz, but when you listen to some of those wonderful voices of classic singers of the 1950s and 1960s (such as Nat ‘King’ Cole, Sarah Vaughan and the Rat Pack, and in particular the passing tones of Frank Sinatra), you just hear a refinement and sophistication to the sound that is so hard to find in audio today, and especially in modern digital audio. It’s all about grace and space… with a little bit of pace thrown in.

The only real mark against the EVO 100 DAC is a paucity of information available. I’m not sure whether it matters, however, as it’s about as simple to use as a toaster!

I’ve been extremely taken by the PrimaLuna EVO 100 DAC, in a way I was taken by the EVO 300 amplifiers we tested in Issue 177. There’s a sense of organic structure to the music that’s common to both digital and analogue sides of the PrimaLuna coin. That’s perhaps understandable in that they share common goals and the same designers (unlike many digital arms of electronics brands, where these might be completely different teams). This is one of the nicest, most effortless sounding DACs out there, but not in a veiled way. PrimaLuna’s EVO 100 DAC is incredibly informative, but in a musical rather than audio-detail way. Nice!