Formula One is, on the one hand, a magnificent waste of money and resources, but on the other, it’s a hot-bed of technological advances, which trickle down into the vehicles that we mere mortals drive. Even my VW Passat has paddles to change gear! But F1 doesn’t just benefit cars: its influence extends to loudspeakers as well, as the fins in the mouth of the vent of a PMC twenty5 series model were put there as a result of lessons learned on the track. Put fins or ‘strakes’ as they call them into an aerofoil and they allow air to flow more easily. That seems like a paradox, as how can putting something in the way of air improve the flow of that air? That comes down to turbulence; the fins reduce the turbulence at the point where the air escapes the vent. This does two things; it allows more of the energy coming from the back of the driver to be heard as sound, and critically means that the driver can have higher excursion and thus deliver higher sound pressure levels. It was PMC’s desire to give the twenty5 series greater sound pressure level/volume capabilities that led to the development of the Laminair vent as it has been dubbed, that and the need for a stiffer cone material of which more anon. The fact that it becomes more efficient, and can convert more energy into sound at low frequencies, is the icing on the cake. 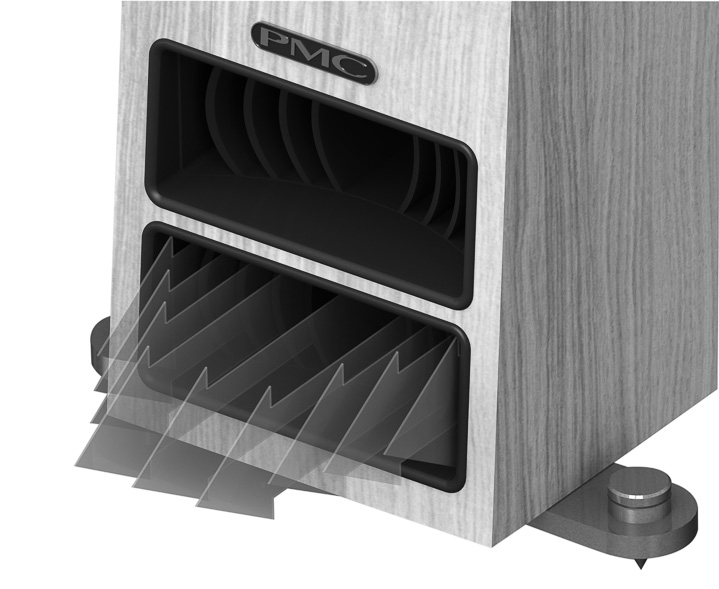 The twenty5.26 is the largest model in the range and the only one with a midrange driver. It’s a proper three-way in fact, with similarities to the mighty Fact.12. It stands just over a metre tall before you add a pair of stainless steel plinth bars that are spaced from the cabinet with cork isolators. These extend the footprint of the fairly slim cabinet and add stability when combined with the rather nice custom made stainless spikes. 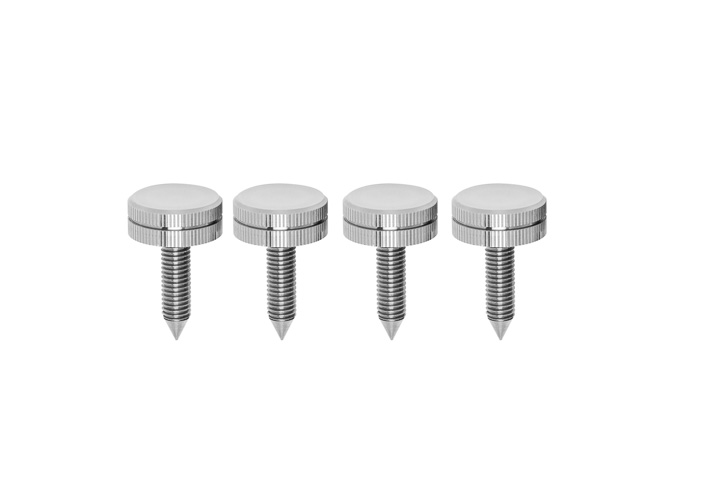 The cabinet itself has the same back-swept lean that PMC developed for the twenty series and would seem to have become a bit of a signature for the brand. It houses a 3.3m transmission line with twin Laminair vents at the front and a single pair of cable terminals on the back. The move away from bi-wirability is a controversial one, but has been practiced by certain successful brands for some time. It also minimises the distance between input and crossover and means that single-wirers like myself don’t need to use the bridging plates that undermine many bi-wirable designs. The terminals themselves are particularly nice custom made examples in rhodium-plated copper, they accept spade, banana, and bare wire connections.

The driver array on this model consists of a 27mm dome tweeter that PMC co-engineered with driver specialist SEAS and a 50mm dome midrange from the same source. The big driver change in the twenty5 series is the mid/bass or in this case bass driver where PMC have moved away from coated paper to a woven glass fibre material they are calling g-weave; there is a distinct aversion to capital letters at the company’s Biggleswade offices it seems. The reason for the change in materials is the extra stiffness it brings, which as mentioned above allows it greater excursion and thus greater power handling. 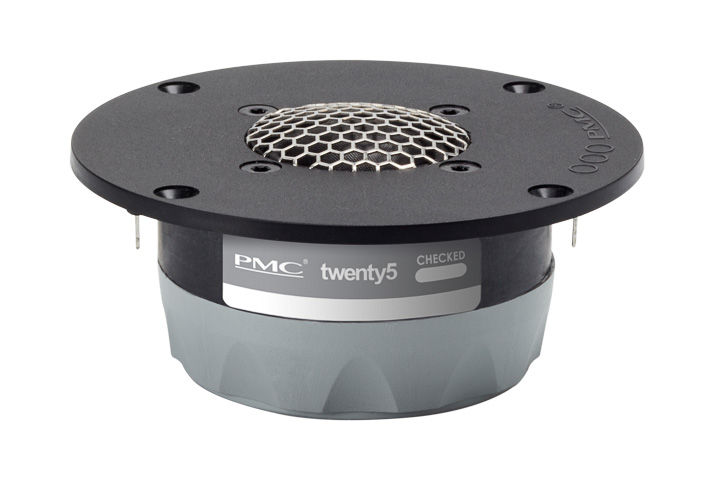 As with most transmission lines, sensitivity on paper is lower than average; this one gives you 86dB for your first watt if you are a metre away, and is specced as an eight-ohm nominal load. So it needs a bit of current, but as PMC has shown with its new Core integrated amplifier, not a huge amount of Watts. Core is a 90 Watt design but you can bet that it can shift a reasonable amount of current when required. I used the ATC P1 150W power amp that forms a reference point in my system as well as one of AVM’s all in one amplifier/CD/streamer/tuners that PMC is distributing in the UK: that being the CS 8.2, a 500W Class D design with a rather different character to the ATC. 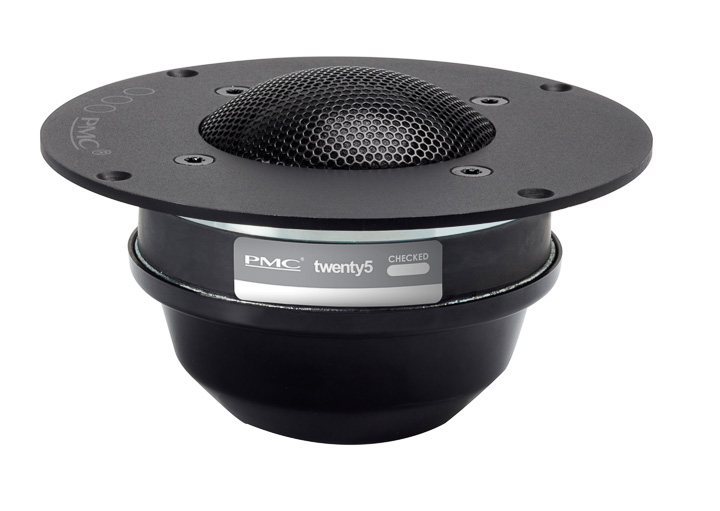 With the AVM at the helm, coupled with the rather fabulous combination of Rega RP10 turntable with an Audio Technica ART1000 moving coil cartridge and Tom Evans Groove+ SRX MkII phono stage, things got very entertaining indeed. The already impressive dynamics of Chasing the Dragon’s España with the National Symphony Orchestra recording reached a new high when the full heft of the kettle drums kicked in and I leapt for the volume control, which may have crept a little high by that stage. But this is a speaker that is so effortless and clean that you are very much inclined to wind up the wick, especially with great recordings. Yet at the same time it becomes apparent that nearly all the music I played was well recorded, the engineers may have used a bit more compression on some, but this speaker doesn’t let that get in the way of the music in the way that some can. There are two schools of thought on what a good sound systems should do; one camp expects certain recordings to sound vastly superior to all the others to the extent that many of the others become unlistenable. Alternately there’s the view that a system should make all of your music sound good and encourage you to listen to it. I imagine that you will have guessed that the second option is the one I prefer. It’s partly because the first approach usually achieves its goal without too much concern for tonal accuracy. It’s very easy to make a system that emphasises certain parts of the spectrum and thus benefits certain recordings, but much harder to deliver detail, dynamics, and bandwidth in the context of a linear response. This is the combination of the two that PMC aims for and, in my experience, gets it right more often than most. 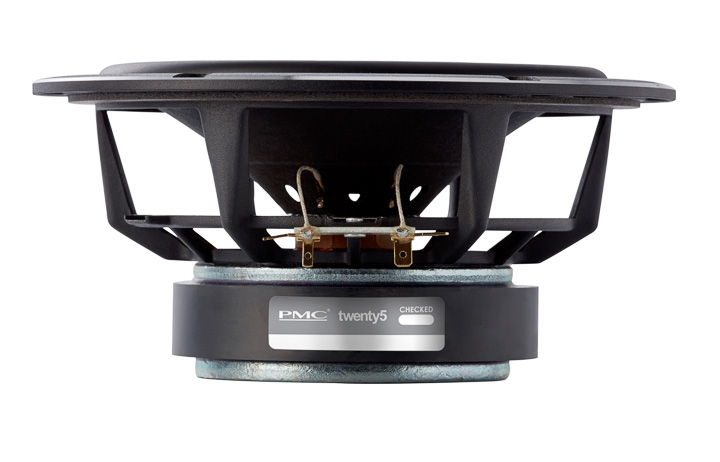 Oh… and timing, that most crucial and elusive of qualities. The twenty5.26 is supremely coherent and this means that the music it reproduces is easier to understand and enjoy because your brain isn’t having to make any effort to hear through time smear. It’s arguably the most important aspect of sound reproduction, as your ear/brain can easily accommodate variations in tonal balance and limitations of bandwidth (that’s why you can recognise people on the phone), but when the timing is wrong so is the music. I was recently reviewing Kraftwerk’s latest revision of their preferred works [3D: The Catalogue, Parlophone] and was able to enjoy not only a soundstage that stretched out to both side walls and the ceiling with low level detail right down to the quietest sounds, but also the musical appeal of a band that often leaves me cold. I put this down to the coherence of this loudspeaker, which is undoubtedly in the first league. 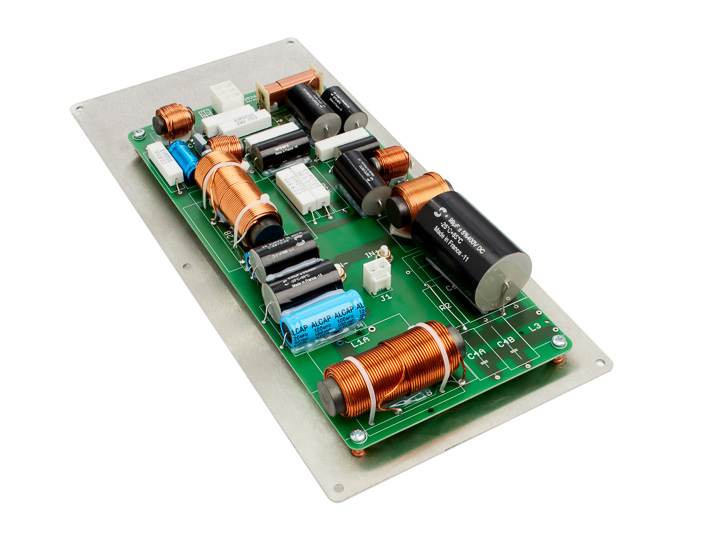 This PMC is very nicely balanced, too. It has excellent bass extension and power, clear, clean highs, and an effortlessly revealing midband. Put all these together and you have an unusually low-coloration loudspeaker, one whose evenness doesn’t initially strike you as being all that revealing because there are no little peaks in the upper mid to add that ‘transparent’ sound. But a few familiar tracks lets you hear that the degree of resolution on offer is remarkable. I use PMC Fact.8s as a reference and they have a shade more transparency but are less extended in the bass, and after a few comparisons I started to think that an upgrade might be in order.

The twenty5.26 is a subtle and revealing loudspeaker; every tweak you make to the system is audible and this means that all the fine details of recordings can be enjoyed. With Javier Perianes’ piano playing [Manuel Blasco de Nebra Piano Sonatas 1-6 Op.1, Harmonia Mundi], the sense of deliberation in his timing is palpable and the precision of decay and micro dynamics totally absorbing. It’s almost like the quieter the notes the more you are drawn into them. Yet, more energetic material is equally enthralling; in fact when I dropped the needle on ‘16 Shells from a Thirty-ought-six’ [Tom Waits, Swordfishtrombones, Island] it was all but impossible to sit still, so compelling was the lop-sided rhythm. If Waits isn’t a Captain Beefheart fan, I’ll eat my hat. 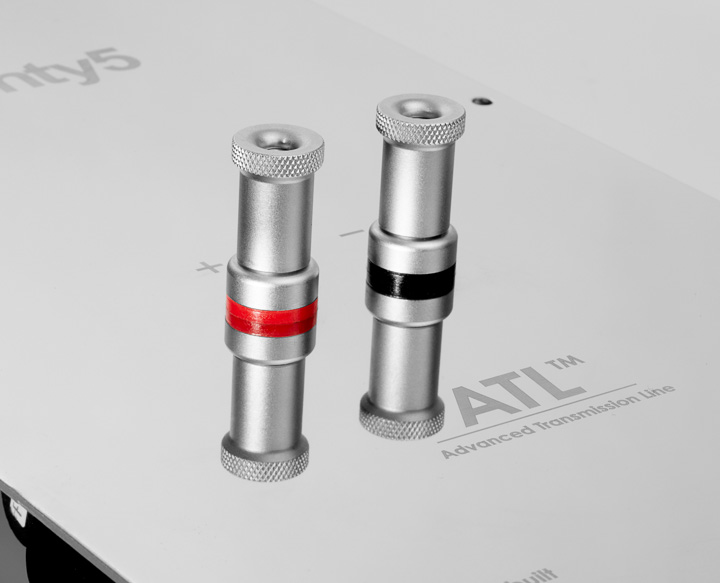 The biggest model in the twenty5 series retains the timing brilliance of the twenty5.22 that I reviewed earlier, but adds bandwidth, dynamic capability and resolution, not to mention power handling to the mix. It is a consistently revealing and musically engaging loudspeaker that makes certain well-regarded competitors seem incoherent and coloured. In other words it’s really rather good indeed. Highly recommended!