Many people have written off CD today. However, reports of the death of the polycarbonate disc are greatly exaggerated. True, it’s getting ever harder to find players, especially new players, and increasingly the audiophile zeitgeist is moving toward online and LP as the music collections of choice, but there are still many enthusiasts who prefer a good bit of disc spinning. Indeed, there are many (incuding several writers for this magazine) who prefer the sound of compact disc over the same files stored on a hard drive.

So, Roksan announcing the Blak CD player last year came as something of a pleasant surprise. Especially as it is so uncompromisingly CD oriented: most players today are almost apologetic about playing discs, and come with a set of functions that open the player up to next-generation formats (most notably, USB inputs). The Blak makes no such excuses for CD replay, and it gives the user the choice of the spinning disc, or the door. In fairness, 21st Century digital inputs are a function of the built-in DAC within the matching Blak integrated amplifier, tested in issue 148. 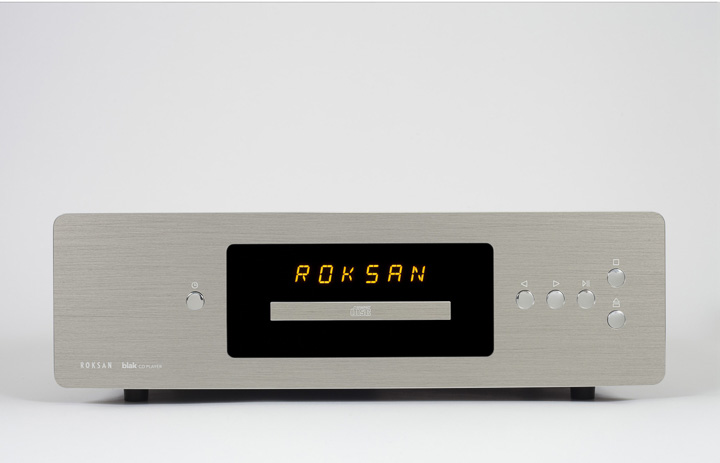 Like the Blak amplifier, the CD player is built to the industry standard 440mm width, but taller than most players (at 140mm, it’s almost twice the height of other disc players in the Roksan range), with a choice of three front panel finishes – Anthracite, Charcoal, and Opium, also known as silver, black, and a sort of rich metallic brown colour that looks a lot nicer in the flesh than it reads in print. The range is intended to sit at the top of Roksan’s expanding electronics line, and at launch there were discussions of these being simply the first two designs in a range of products, but no future products have been announced to date.

Also like the Blak amplifier, the on/off switch is under the left of the front panel. In the ‘manuals are for wimps’ stance common to most men, I confidently mashed all the buttons on the remote and front panel to no effect until I found this hidden little power button. When depressed, however, the Blak springs to life, with a huge yellow LED read-out above the central CD draw. When not telling you that you just bought a Roksan in big letters, it can rack through different variations on track and time elapsed options, but any kind of CD-Text options (like artist or album or track) elude the Blak.

The display options are controlled from the lone silver button on the left side of the front panel. An array of five similar-sized silver buttons control almost all track-handling functions (except repeat), and in a time of a return to minimalism, it’s good to see a player that can be driven without a remote.

The large back panel houses a pair of high-quality gold RCA single-ended line-level sockets, a pair of equally decent XLR line level outputs, and digital coaxial and TOSlink S/PDIF connections and – somewhat overlooked in many modern players – an AES/EBU XLR connection. The sheer size of the rear panel means each of these connections is easy to reach and no-one will ever have much in the way of problems hooking the Blak to a system. The matching amplifier offers both single-ended and XLR inputs, so feel free to experiment, but I preferred the single-ended input.

Where every other company proudly shows off what DAC chip is used in their digital devices, Roksan is one of the few that keeps quiet about the inner workings of its products. I’m not sure why Roksan is so shy – peering under the covers reveals a perfectly serviceable Texas PCM1798 chip, and a solid – if unnamed – transport mechanism.

This somewhat cagey approach to digital audio design,  coupled with a minimalist exterior, does make for a review that focuses on the performance rather than the specifications and features. Which is no bad thing, because the Roksan Blak delivers a very well-rounded performance. There seems to be no need for elaborate set-up rituals, fancy cabling schemes, magic cones or boxes of tricks, and no need to wait weeks to run in the Blak. It works out of the box, and doesn’t need pampering. This also extends to its playing of discs, especially those not in their most pristine, straight out of the jewel case, condition. Some of my CD collection – the part that was ripped years ago and now resides in the attic – has seen better days and a few are almost test discs to see whether a player skips. And the Blak aced this test, except for one very old disc of Jessye Norman singing Strauss’ Four Last Songs [Philips], which looks as if it has been in a sandstorm and in fairness has skipped on every player for the last 10 years. All others – including a recording of ‘Telemusik’ by Karlheinz Stockhausen that I bought when in a particularly opaque mood (but before his infamous 9/11 comment) and that sounds like it’s skipping even when it isn’t – played perfectly. 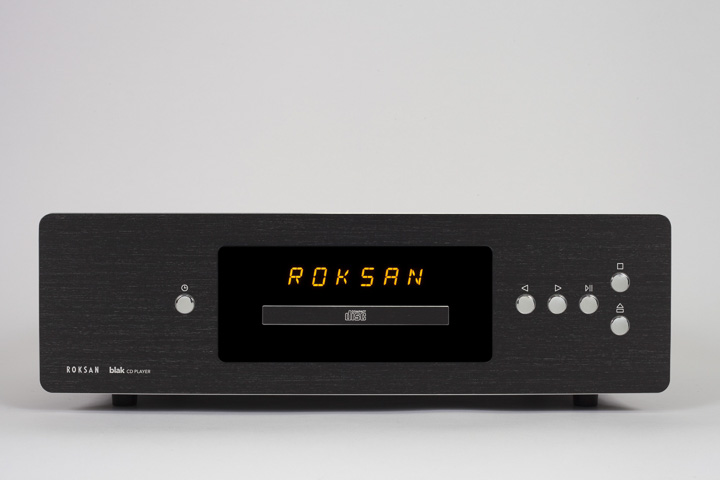 Most CD players today (at least, most CD players today that don’t cost as much as a new car) seem to either go for a euphonic approach to sonic replay, or a version of ‘neutral’ that is stark and emotionless. To my mind, these are two different kinds of wrong, but without dCS-grade money to hand, usually the only other way to correct this is to buy second-hand and hope the transport mechanism isn’t on its last legs. The Blak is one of those rare players that sits between these two extremes, and reminds me of some of the great well-balanced CD players of the past (like the TEAC VRDS-10, the Marantz CD-17, and the Meridian 508.24).

How this presents itself in musical terms is it creates a sound that is writ large – the soundstage in particular is extremely wide and deep, but the instruments within that soundstage rarely appear oversized. This is incredibly important when playing Panufnik’s ‘Sinfonia Votiva’ [Boston SO, Seiji Ozawa, Hyperion], which is a 1981 recording of great energy and fine recording quality, as it can so easily move from modern religious passion to blurred and overblown arpeggios. The Blak comfortably teases out the themes from the ornament. This track also needs an excellent sense of scale and solidity to give the recording the power Ozawa is so good at releasing, and once again the Blak excels in this respect. But perhaps the most important aspect of the player’s performance revealed in this (and other recordings) is that trade-off between euphonic richness and stark clarity that is so commonly a function of modern CD players. Too much in one direction and this sounds like badly-edited plainsong, too much in another and it sounds like an orchestra rehearsing for the soundtrack for a Soviet-era cartoon about the perils of tractor production. Here, however, it simply sounds like Panufnik’s religious works.

Roksan has made an exceptionally clean and precise sounding player. It has a fine, tidy, and well-structured sense of rhythm. The secret to this is not to simply play something with a simple 4/4 time signature, but something that throws your foot-tapping way off balance, such as Dave Brubeck’s 5/4 time ‘Take Five’ or the alternating 9/8 and 4/4 time signatures on ‘Blue Rondo à la Turk’ [both from Time Out, Columbia]. The ability to tap your foot to such a difficult rhythmic concept is to no small degree dictated by the timing precision of the player, and the Roksan has no problems at all here. And yet, it’s not so bound by its rhythmic concerns to be incapable of anything apart from foot-tapping. A lot of my music doesn’t follow formal tempo structures, and a Schoenberg piece is arguably more about its timbral and tonal qualities, rather than merely tonal – elements at which the Black is equally adept.

A problem with picking out aspects of a performance, is they often look to micromanaging the discussion of sound quality, instead of looking at the player’s performance as a gestalt. But, with the Blak it’s hard not to look at music in any other way because the sound is holistic in intent. You aren’t drawn to the microdynamics of a piece, for example, because they aren’t highlighted or accented on the Blak, rather than they simply aren’t that well covered. 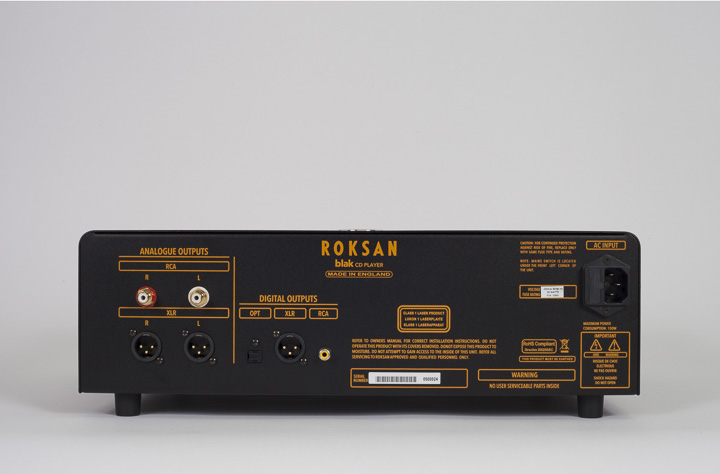 I suspect many Roksan Blak CD players will be sold as matching components to the Roksan Blak amplifiers. This is a shame, as the player is a fine standalone product in its own right. It offers a balance of CD playing properties that were lost at this price point. In fact, the word ‘balance’ perhaps best sums up the Blak’s musical performance. There are other players at this price (or even lower) that can deliver a more exciting sound, but at the expense of the accuracy. There are also others that can return a more accurate sound, but at the expense of the musical excitement. The Blak is one of the few today at the money that can offer both. Is this the start of CD’s comeback? Maybe, and it comes strongly recommended.