Once upon a time, audio used to march to its own beat. Now, it seems to march to the beat of the smartphone world. Launch a piece of hi-fi today, and by the end of the week it’s old news. Companies therefore keep pace by launching ever smaller and larger variations on the same theme. Pearl Acoustics begs to differ. It has just the one product – the Sibelius SG floorstanding loudspeaker – and there are no plans to expand, alter, change, restructure or turn the Sibelius into a ‘range’. In a time where ‘what have you done for me lately?’ rules the audio roost, the Sibelius is a loudspeaker for the ages.

The idea behind the Sibelius is a distillation of technology old and new. The loudspeaker cabinet is a quarter-wave, folded horn design that follows a tradition that stretches right back to Paul Voigt and the first years of electrical loudspeaker systems. Back in 1930, Voigt’s concept was to amplify the relatively small signals emanating from a loudspeaker drive unit using a column of air chambered within a cabinet, something Pearl Acoustic’s designer Harley Lovegrove was investigating some 82 years later.

It begins (as it so often does in audio) with a personal quest for musical perfection. Having listened to classic Lowther designs and even commissioning a variant on the Scott Lindgren Frugel-Horn, perfectionist Lovegrove began to think about building his own loudspeaker; he was drawn to the work of Voigt, and realised that such designs rely on extremely rigid cabinetry. MDF and its ilk simply did not cut the musical mustard. This prompted a move to a solid timber cabinet, and finding a similarly like-minded perfectionist in both driver and woodwork. This led to working with Mark Fenlon (of Markaudio-Sota fame), joinery expert Chris Cabergs, and to the use of unbraced cabinets of 3.3cm thick, slow grown, solid French oak, in timbers aged for 12 years (under the ‘if it works for whisky, it must be good’ rule). Coupled with a classic version of one of Fenlon’s wide-range drive units (Lovegrove prefers this to the latest voicing), and months of listening to damping materials (Lovegrove and his team don’t get out much), the Sibelius slowly came to fruition. 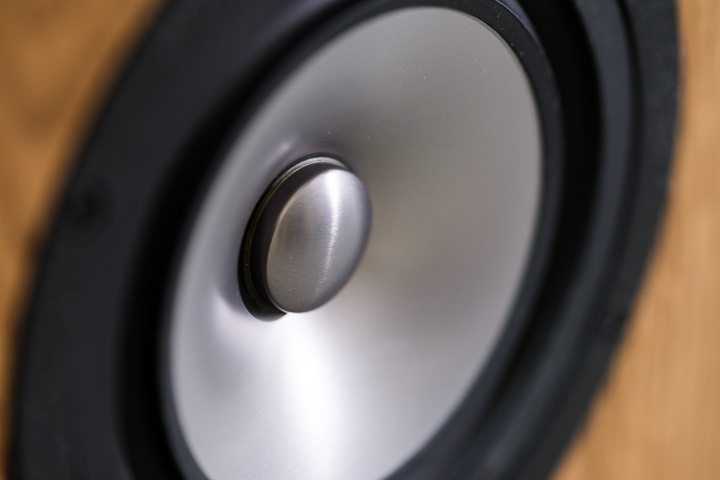 The Sibelius is a single-way loudspeaker with a relatively narrow front baffle and the exit point of the internal horn at the base of the loudspeaker. It is single wired to two solid connectors at the rear, with no filters or electrical components in between. It is offered with an adjustable steel base with an L-shaped upright for cable support. There’s a panel on the back bearing Jean Sibelius’ signature (this is not the kind of loudspeaker that ends up in the kind of dealer who would think Sibelius was the designer… hopefully), and that’s about it. There’s no grille or ornamentation, but they do offer a dust cover to protect the drivers from prodding fingers and adventurous household pets when not in use. So there is nothing to fall off, tarnish, or break. Even the manual is out of the ordinary, as it is a hardback autobiography, philosophical treatise on loudspeaker design and room treatment, and installation guide. Also the lack of bracing means although the loudspeaker is made from solid tree, it’s not too heavy as it comes in at around 29kg per loudspeaker.

You are not entirely without options, though. There are a range of stains available alongside the well finished, dozen year aged, solid French oak cabinet. There are also minor variants on the driver itself, such as a ‘CG’ version that replaces the silver alloy drive unit with a copper alloy cone (all other specifications remain functionally identical) and a ‘P’ version that replaces the metal cone with a paper one. This last is designed to be deliberately reminiscent of classic paper cone designs like Lowther. This makes the loudspeaker slightly more efficient, at the expense of a hair less maximum output and greater limits on power handling. On paper, at least… as we only had the standard ‘SG’ version to hand, we can’t comment on the performance of either of the other models.

If the term ‘SG’ sends you racing to the Gibson SG guitar and it being the preferred weapon of choice for AC/DC axe-grinder of note Angus Young, you are reading the wrong review. While these loudspeakers are perfectly comfortable playing almost all genres of music, the Sibelius’ power handling and maximum power output figures suggest a loudspeaker unsuited to playing power chords at high volumes, and this is confirmed in the listening.

Obviously, you are going to play Sibelius on a loudspeaker that bears his name, and for good reason: on Sibelius’ Symphony No 5 [Vanska, Lahti SO, BIS] these loudspeakers recreate the music’s almost perfectly organic sense of flow, from the French horns at the introduction of the piece to the powerful conclusion, the loudspeakers draw you into the music and the composer’s mastery of the thematic form. It made me want to skin a moose with a Nokia phone, or something equally Finnish.

The Sibelius (the speaker, that is) has an unfatiguing, almost sweet-sounding presentation. It’s possibly not the first word in modern-day audio transparency, but that doesn’t seem to matter to those who fall under the loudspeaker’s thrall. This is a loudspeaker for enjoyment, not audio engineering, and those who are in step with that kind of thinking will sit and listen to these loudspeakers happily for the next few decades, drinking in a sound that is deeply satisfying and designed for endless, effortless listening. In a way, this is a point source spiritual heir to classic British loudspeakers like the Castle Harlech, mixed in with the sound of good Horning Agathons: in other words a kind of slightly rich effortlessness that stays just the right side of ‘warm’.

That effortlessness also applies to its portrayal of dynamic range, although this is more about subtle micro-dynamic cues that draw you into the music than the rolling thunder of timpani and Led Zep drummers. This is the kind of dynamic shading of the tabla, not just in audiophile recordings, but on the zany but brilliant version of ‘Take Five’ by the Lahore-based Sachal Studio Orchestra [Sachal Jazz – Interpretations of Jazz Standards & Bossa Nova, Sachal Music]. This Pakistani take on jazz standards is a little hit or miss, but ‘Take Five’ is definitely a hit and the combination of microtonal playing and some extremely fine tabla musicianship needs a deft loudspeaker to sound at its best, and here it just shone. 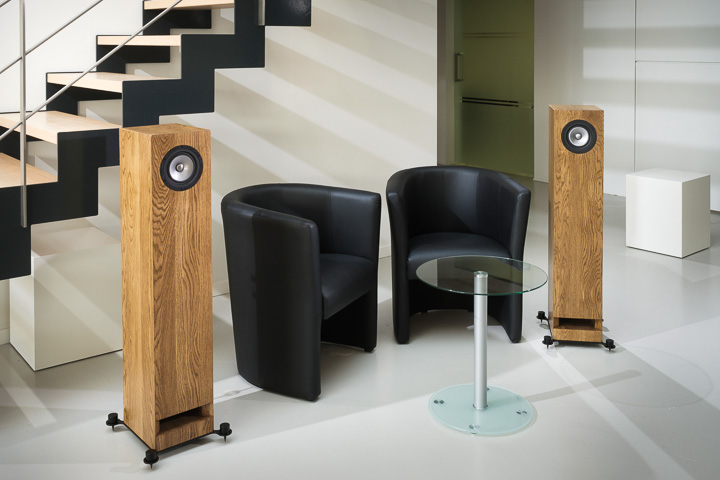 Where the Sibelius really sounds at its best is on anything that plays to its strengths, and those strengths begin with  its exceptional imaging properties. This is perfectly understandable when you consider it’s basically a point source loudspeaker sitting in a quarter-wave enclosure, but even so the ability these speakers have at teasing out a soundstage is little short of remarkable. Harking back to ‘Take Five’ once more, the layering of the strings section and the physical space occupied by the acoustic guitar or the sitar between the loudspeakers is so precise, you could be in a studio half a world away.

Tonally, the loudspeaker is just about spot-on. It doesn’t mask errors of judgement on behalf of the producer or engineer, as it lays bare toppy, over-compressed, peaky, or dynamically compromised recordings. Play some over-produced, auto-tuned, X Factor runner-up, bleating on about yet another failed relationship as someone tunelessly mashes a few arpeggio chords on an over-reverberated piano, and that’s precisely what you hear, warts an’ all. On the other hand, play some Duke Ellington from the 1930s and the years evaporate. Yes, the recording might be the wrong side of ‘rudimentary’, but the overall balance and the musicianship of the recording shine through.

We live in an immediate, ‘always on’ world, and that comes with a lot of obsolescence in tow. People dipped in this way of thinking may struggle to parse the concept of a loudspeaker designed for decades of use. The Pearl Acoustics Sibelius SG is not for audio fly-by-nights who flit from shiny thing to shiny thing. It’s for people who got past that. This is a handmade musical tool for those who listen to a wide range of musical styles, and are mature enough not to be impressed by ‘loud’. This has to remain something of a cautious recommendation, because many people have not yet got to the Sibelius’ level of refinement and maturity in their audio system choices. But for those who have learned there is more to musical life than simply ‘wow’, the Sibelius is there for you, and will be your musical partner for decades. 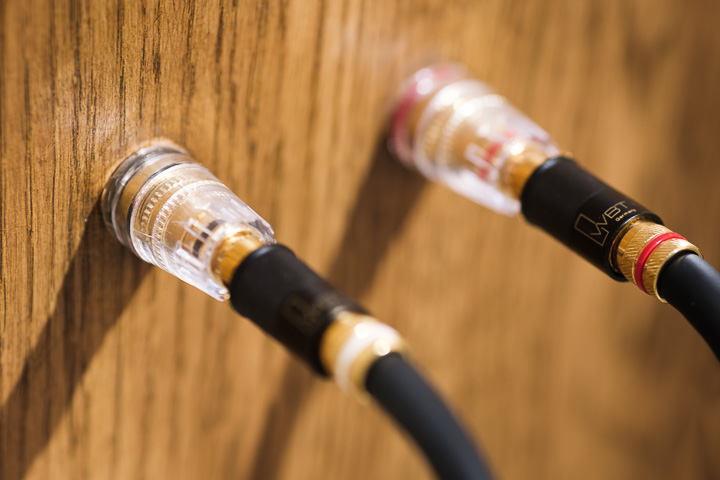 Moon by Simaudio 230HAD headphone amplifier