I did wonder why this company has the name it does but a quick scan of founder Enrico Rossi’s background indicates that he’s a big fan of opera, and an Italian, so it didn’t take much of a leap to guess that the name comes from Bellini’s opera of the same name. Rossi’s company is based in Cremona, an Italian city that’s steeped in musical history thanks to the craftsmanship of Guarneri, Amati and Stradivari. Names that will be familiar to Sonus faber enthusiasts as well as those with a passing interest in violins and violas. There must be something in the water because this Norma amplifier is also extremely musical despite the absence of wood and gut.

Norma makes a range of electronics that largely consists of amplifiers in one or two boxes and digital sources in the form of a CD player and a DAC… alongside a unit that does both. The IPA-70B is a rather elegant integrated amplifier that sits just above the entry level HS-DA1 and forms the starting point for the IPA range. This amp is as impressive inside as it is attractive outside, as its internals are very neatly laid out and colour coded in black and red with the heavy-lifting elements of the power supply shut away in their own case, presumably to keep transformer radiation away from the signal chain. The asymmetric nature of the heatsinking reveals that the power transistors are on the opposite side to the transformer, which must also help with keeping the signal clean. 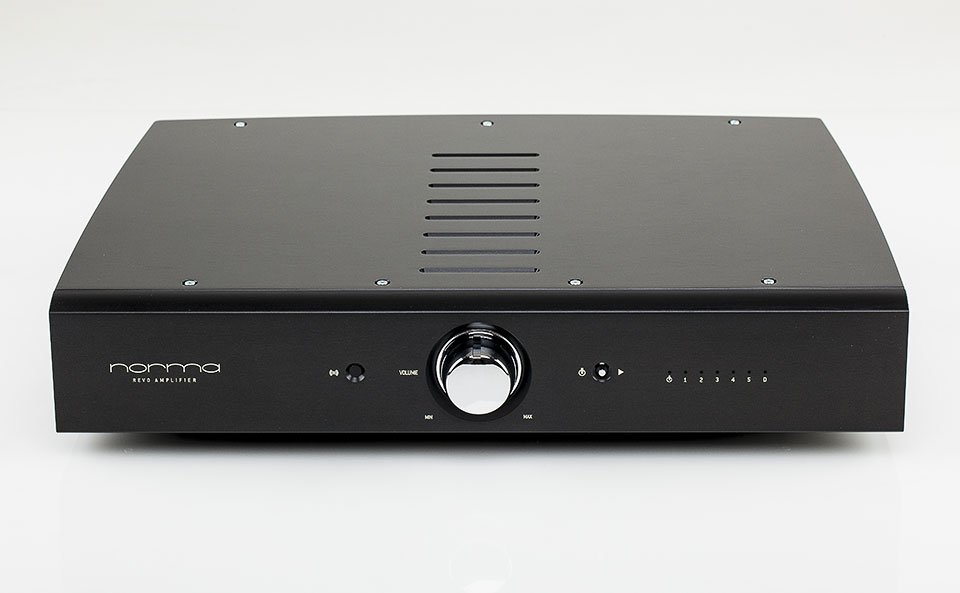 In its standard state, the IPA-70B has five line inputs and a direct or AV input alongside a record output, but it can be supplied with either an onboard USB DAC or an MM/MC phono stage which is a useful degree of flexibility. The DAC is a relatively old-school Wolfson type with a maximum 24-bit/192kHz sample rate. This choice suggests it was made for sound quality rather than specmanship reasons. The optional phono stage has multiple gain and impedance settings plus ‘spare’ options for both, so you can have a setting of choice within reason. The amp can be controlled with the single button and volume knob on the front or with an aluminium remote handset which is almost festooned with small switches. It does, however, fit easily in the hand and with practise you can find the volume buttons without looking. The only minor gripe with ergonomics is that it’s difficult to see how high the volume is in anything but bright light.

Being an opera nut, Enrico Rossi is very keen on the human voice and bases his designs on the getting it right, in his own words “I have never heard a system, with correct voice reproduction sound bad with other types of music. If you reproduce the voice well, everything else will be automatically reproduced well too.” I hadn’t read that when I first started using the Norma through Bowers & Wilkins 802 loudspeakers but one of the first notes made was about how good the voice sounded, specifically how much nuance and subtlety could be heard in Ishmael Reed’s voice on Conjure’s Bad Mouth album [American Clavé], where the cymbals were clean and open and the bass line muscular. This is achieved partly because noise levels are clearly very low but more importantly because this amp’s timing is absolutely bang on, yet it is also smooth and relaxed. It’s a bit of an enigma, usually this combination of qualities can only be found with planet busting Class A amps, and only the biggest have the bass capabilities offered by this 70 Watter.

The distributor Anthony Mills puts a lot of this down to Norma’s preference for very wide bandwidth; 2MHz, which is not outrageous but neither is it common. I started out using the IPA-70B with a pretty high end Moon 780D streaming DAC, which undoubtedly helped matters but the performance wasn’t that far behind with the onboard converter. Not as smooth and sweet but extremely articulate and well separated. This is a relaxed but phenomenally precise amplifier that lets you hear right into the mix with anything it plays, if the speakers are up to the job. My preferred timing test this season is ‘Cumberland Blues’ by the Grateful Dead [Europe ’72, Warner Bros]; it’s not the sweetest recording and there’s a heck of a lot going on but the clarity and coherence of the Norma made it hang together perfectly, allowing two guitars, two keyboards and a rhythm section to bang out a kickin’ groove. The following track ‘He’s Gone’ is more laid-back and an absolute beauty with this amp, full of superb bass lines and heart rending lyrics. 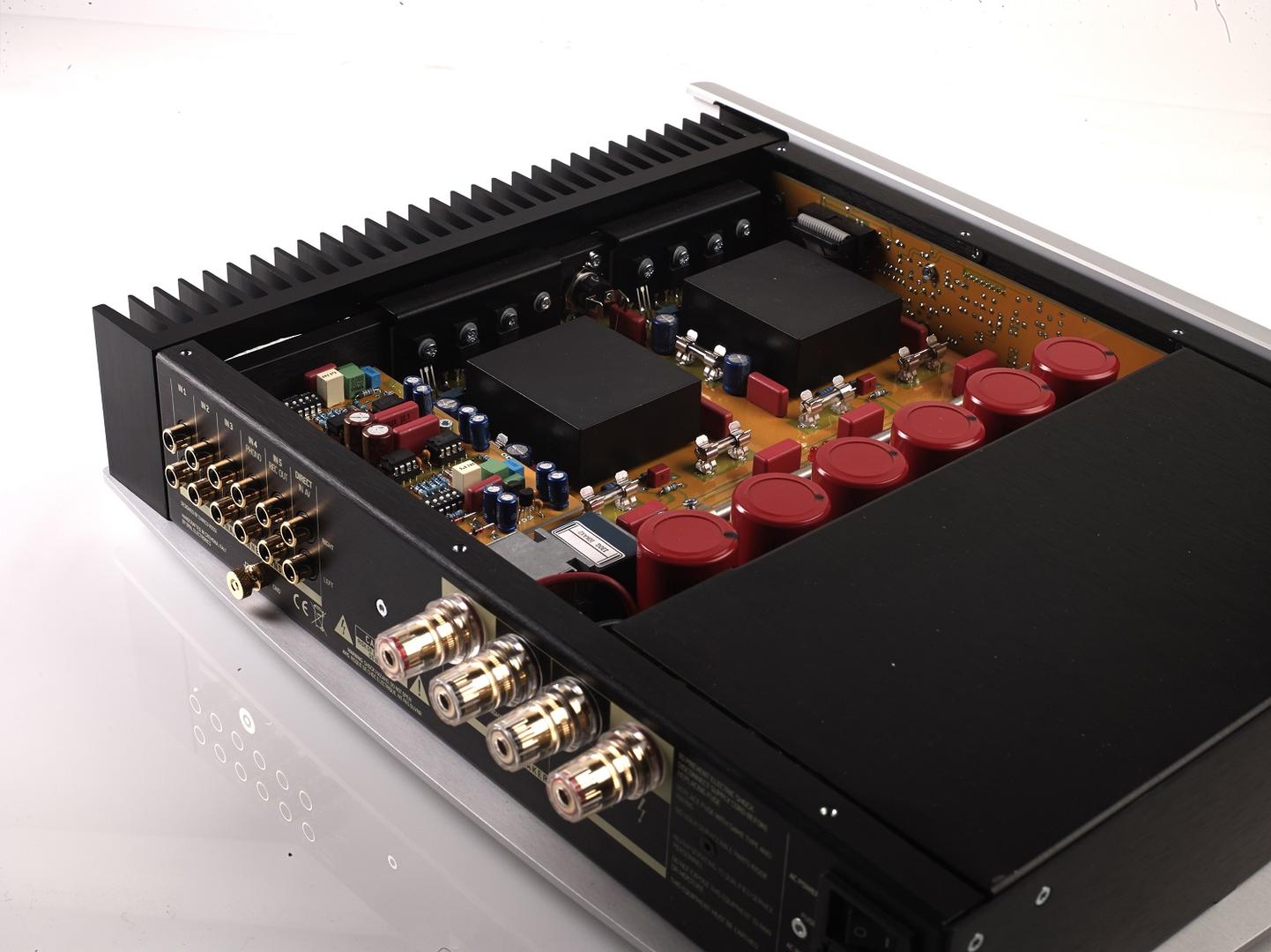 Moving over to vinyl with an external phono stage revealed just how good it is at opening up the micro dynamics, tracking the different levels of the voices and instruments in the mix. Here it became apparent that there is a slight sense of smoothness in the amp’s character, which stops anything sounding grainy in the typical class AB fashion. It is slightly synthetic and not something I’ve previously encountered but it doesn’t get in the way of the music which is extremely compelling regardless of type. If you are looking for the grit and grain in a recording this might be an issue, but if you are looking to hear right into the soundstage and enjoy great timing then it’s a price worth paying. A Class A amp will give a bit more transparency but won’t have the power available here nor necessarily the ability to track microdynamics so well.

Going over to the onboard DAC on the Norma and hooking up an AURALiC ARIES G1 network streamer to the USB input the sense of great timing continued, the onboard DAC is not as finessed as the external and admittedly very pricey one I was using but in some ways the extra bite it brings to leading edges is no bad thing. Playing Esbjorn Svensson Trio’s Live in Hamburg (ACT) it strikes me that they were the ZZ Top of the jazz world, both bands had phenomenal rhythmic precision (the difference being that E.S.T. could do this whilst improvising, I’ve not heard the little band from Texas do the same). The Norma distributor mentioned that this amp works well with Russell K speakers so I hooked up some Red 120s and found a lot to like in the surprising scale and low end extension they delivered. There was so much of the latter that I had to pull them a good half metre from the wall, which suggests a less than vice like grip on the IPA-70B’s behalf, however tricky tunes like ‘Cumberland Blues’ worked a treat.

The last speaker to take the Norma test were my trusty PMC fact.8s, and almost immediately I realised that they should have gone on first. This is a superb combination thanks to the ‘no holds barred’ transparency of the speaker and the smooth but fast nature of the amp. Imaging was superb as was contrast and separation between instruments and voices, a quality that made Radiohead’s ‘Decks Dark’ [A Moon Shaped Pool, XL] a lot more interesting than usual. A lot of work has clearly gone into this production with the engineer using depth variations and placement to create a holographic soundstage that while totally unnatural is extremely effective and envelopes the listener. It inspired me to play Arvo Pärt’s ‘Tabula Rasa’ with Tasmin Little on violin [Fratres, EMI Classics], here the texture and variety of the timbre from that instrument was scintillating, but it didn’t move me as much as ZZ Top’s ‘10 Dollar Man’ [Tejas, Warner Bros], which hit the spot far harder than expected thanks to the dynamics of Billy Gibbons’ guitar playing. 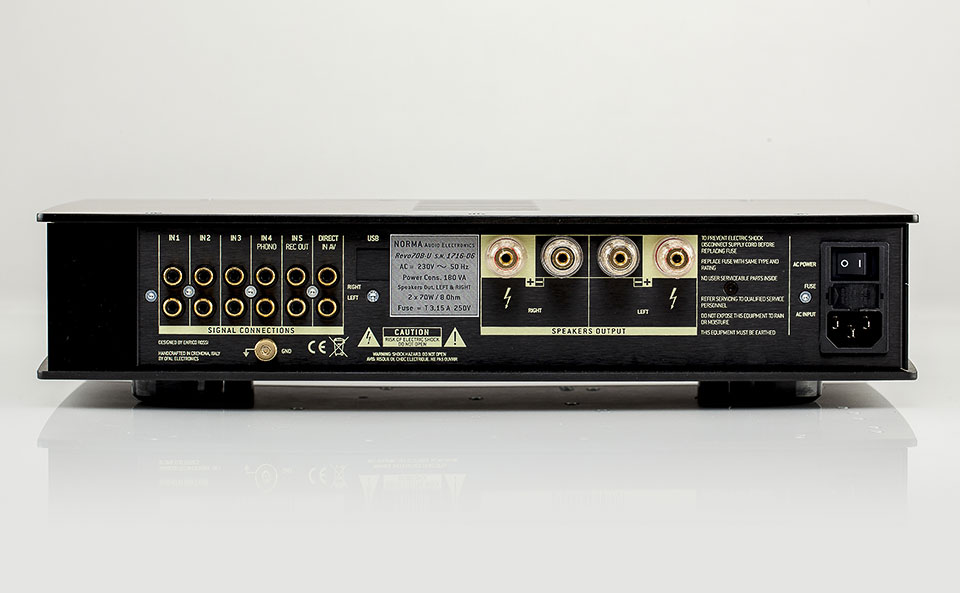 This Norma is an intriguing amplifier; it does so many things so well that you have to wonder how Enrico Rossi has achieved it. The ability to combine so many strengths in what is a relatively compact and attractive amp is very unusual, very few do pace this well and it’s equally rare to hear microdynamics delivered so clearly. It certainly makes you wonder about the bigger IPA-140B, which if like this it can double its output into a halving of load must be a bit of a monster. Feature wise the single input DAC might be a limit for some and at this price level some competitors offer balanced inputs, but the DAC itself is very good and personally I’ve yet to hear real benefits in balanced connections where cable lengths are sensible. If you’re in the market for a new amplifier I suggest you put this near the top of your audition list.

Analogue outputs: One rec out (via RCA jacks)