Mytek’s half-width and affordably priced D-A converter is now in its fourth incarnation after the line began with the Stereo192-DSD in 2011. Successive models were dubbed the Brooklyn and each time they gained upgrades in converter silicon.

Each time, that is, until the Brooklyn Bridge, which launched this year with not a new DAC chip, but added network, Wi-Fi and USB connectivity and no longer requiring a separate streamer or computer to deliver the digits.

Mytek has long turned exclusively to ESS Technology and its Sabre series of DAC chips, and the Bridge here takes the same ES9029PRO as the previous Brooklyn DAC+. It’s a well-respected high-specification converter that decodes PCM up to DXD-spec (24-bit and either 352.8 or 384 kHz), as well as the highest commercial DSD files at 4x baseband rate – DSD256 – albeit with the usual ceiling of DSD128 when used in a DoP setup.

It’s a very tidy unit, available in black or silver finish, with a multi-faceted fascia to provide some textured interest. A quick tour around the Bridge shows it really doesn’t want for much in features, serving as an all-round digital (and analogue) pre-amplifier.

Menu navigation is via the main encoder knob plus four concealed buttons, two either side of a colourful and detailed OLED display that’s replete with dancing peak meters when active. The company M logo lights up in a choice of 16 intense colours, or the backlight can be disabled if desired. For remote control, Mytek includes the aluminium Apple Remote.

On the rear are RCA and XLR balanced outputs, plus four digital inputs – two
S/PDIF through RCA, Toslink optical and USB Type B. The S/PDIF pair can be combined to create an SDIF-3 three-wire connection with the help of a BNC word clock, the professionals’ choice for piping raw DSD.

An extra power supply input is a useful feature, instated after Mytek dropped its linear power supply for the first Brooklyn. It allows in one easy move to sidestep the internal switched-mode unit, a custom SMPS inside its own semi-Faraday cage. More on that later.

Besides its core D-A function, the Brooklyn Bridge can serve as pre-amp. Two volume schemes are offered – purely digital attenuation, and an analogue resistor-ladder volume. The final choice is left to the listener’s taste. A relay-switched bypass mode disables either option for a clearly audible better sound, providing one has a half-way transparent pre-amp already.

By default, the line-level output is rather hot, at 4.8 V unbalanced and 9.7 V through the XLR sockets, but thankfully this can be trimmed down through the menu by –12 dB in 1 dB steps. Unlike the previous global attenuation, this works per input, so it’s necessary to adjust for every digital source. In practice a –6 dB adjustment works well to bring volume down to similar levels as with most other consumer audio kits.

There’s a phono stage ready to work with either moving-magnet or moving-coil cartridges, and this can be disabled to access a regular line-level input. There’s no adjustment for sensitivity or impedance, and in practice the MC input proved too high in gain and in noise, with added MW radio intrusion. The MM on the other hand is very good, clean and revealing. Two 1/4-inch sockets on the front will either drive two pairs of headphones, or with the help of an additional XLR adaptor can be combined to provide balanced-mode operation. As such, the 6 W headphone stage is no afterthought.

For its network streaming function Mytek has added a UPnP module from Korean developer ConversDigital, overseen by the ‘mconnect Player’ app for Android and iOS (£5.99). This mostly works well, giving a slick interface to navigate through thousands of albums on a NAS drive, for example. The same app is used for logging into rental services Tidal and Qobuz, and it can find your own music files stored on certain cloud accounts, namely Dropbox, Microsoft OneDrive and Apple iCloud Drive. Unfortunately, missing currently is any means to access internet radio.

There does seem to be a formatting limit on high-res audio via the network input though, as I was unable to play PCM beyond 192 kHz and DSD higher than standard DSD64 when using MinimServer on various Synology and QNAP NAS drives. Gapless playback is a tick box in the app settings – two in fact for ‘by App’ and ‘to Renderer’ – although no combination would successfully play albums through without a fractional pause between tracks. For some listeners that could be a deal breaker if this was the primary input source. The app suffered a few random quits over several months of use, still making it one of the more stable when set against the worst offenders here.

In core sound quality, the Brooklyn Bridge is a neutral and highly resolving digital convertor, able to extract the musical essence from a variety of digital formats. A good starting point is with CD audio, here played from a Mac mini running Audirvana Plus with CAD USB cable. 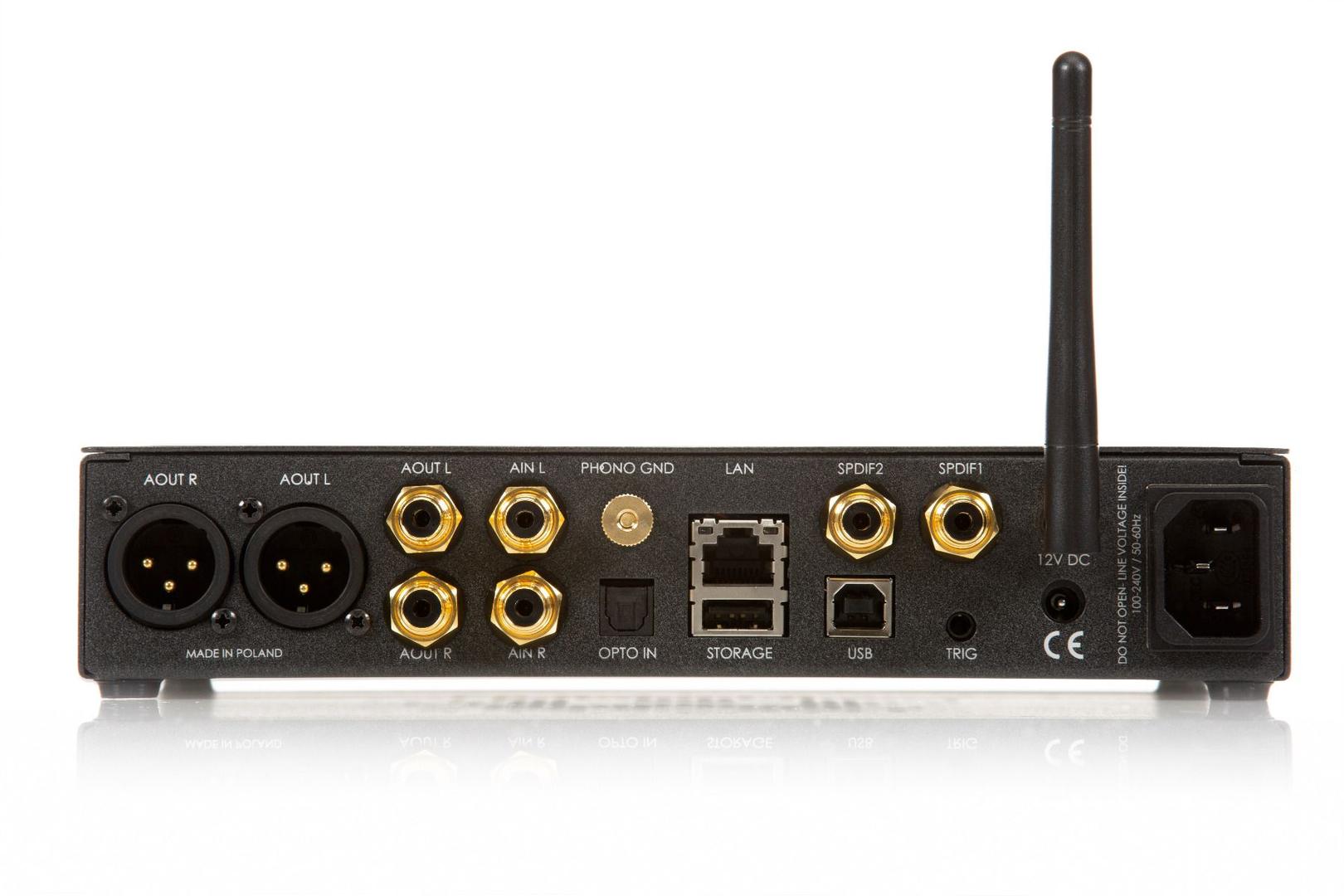 Before finishing the setup though, it’s wise to find the preferred digital interpolation filter for PCM, from a selection of seven that are hard-coded into the ESS convertor chip. By default, the Brooklyn has an MQA decoder enabled with a supplemental minimum-phase filter running in DSP. This gives the semblance of a detailed and spacious sound, at the expense of coherent musical timing. High frequencies are delayed behind mid and bass, making for an ultimately confusing and soulless listening experience.

Even after disabling the proprietary phase-distortion feature, a FRMP (fast roll-off minimum-phase) filter is still enabled. If you wish to preserve musical timing, switch to linear-phase. There’s a choice of four: fast and slow roll-off linear-phase filters (FRLP and SRLP), brickwall and what ESS calls an Apodizing filter, which in this instance is actually also linear-phase. FRLP and SRLP were the favourites; the former more incisive and fractionally more impulsive, the latter slightly more flowing and organic.

Halfway between standard and high-res releases are those odd fellows mixed down to 24/44.1, such as Medeski Martin & Wood’s Omnisphere (Indirecto Records), a strangely beguiling blend of the jazz chameleon outfit’s humoured funk supported by avant-garde classical collective Alarm Will Sound. The opener ‘Kid Tao Mammal’ is a kaleidoscopic journey from rocky jazz with John Medeski on echoed Wurlitzer electric piano, to an other-worldly collage of winds and strings before settling back into the offbeat funk groove for which the trio are celebrated. The Brooklyn laps up such challenges, keeping the pace where needed, revealing the scratchy timbres of slow string glissandos, the strangled mute-brass squeaks, before focusing on the crisp timing of drummer Chris Wood.

Against the original Mytek Brooklyn, the Bridge certainly benefits from the later ESS DAC chip, with a lighter and more revealing mid-band and sweeter top end. There’s more light on the upper treble, already a hallmark of the ESS sound, more vivacious overall but never tiring unless the music wants it so.

A step forward in that excitement was also found using the streamer module, versus USB connection to PC. With the Ethernet cable in place, the Bridge plays well from UPnP-enabled NAS drives on the network, sounding a little crisper and more resolving, if losing some of the low-level subtlety I heard through a decent USB connection.

The Brooklyn Bridge is truly a jack of many a trade, and will suit, well, anyone looking for a compact do-it-all DAC plus pre-amp plus headphone amp. It even makes a good stab at vinyl when set to MM mode. For the most part it was tested as an audiophile stereo DAC though, and here it has mastered its trade. There are even sweeter sounding DACs if you have another £1,000 or so in your budget, but for under £3,000 it is very hard to better. And if streaming isn’t your bag or you already have that covered, the Brooklyn DAC+ is still available at around £800 less.