Staying with the BMW analogy, the Gold 200 is the loudspeaker equivalent of a 520d with leather interior. In both cases, it’s the model that marks the owner out as both discerning and fiscally level-headed.

Monitor Audio favours the MPD transducer over the more common dome tweeter because of its far greater surface area which, it says, delivers smoother and faster high frequency response all the way to 100kHz. C-CAM is given the nod thanks to its resistance to bending stresses and, consequently, its consistency and efficiency – plus, of course, Monitor Audio has been aboard its ‘metal drivers for the win’ hobby-horse for some years now. And RDT II combines C-CAM as a front skin with carbon-fibre as a rear, sandwiching a Nomex honeycomb core – the result combines the sort of lightness and rigidity that’s essential to pistonic efficiency and is, says Monitor Audio, the lowest-distortion cone in its history.

That’s a strong start on the ‘racy-sounding abbreviations’ count, but there’s more where those came from. The two bass drivers feature Monitor Audio’s patented DCF (‘dynamic coupling filter’) technology, wherein the more usual rigid coupling between driver and voice coil is replaced by a pliant alternative. In this instance it’s a nylon ring, calibrated to be rigid up to the crossover frequency and springy above it (to dampen surplus higher-frequency energy), and vented to aid cooling and air-pressure dissipation.

The crossover points are 650Hz and 3.5kHz respectively, which are well chosen as they are far away from the all-important midrange territory where listeners are especially sensitive.

Bringing up the rear of the list of abbreviations, and positioned at the rear of the Gold 200 cabinet, are a couple of HiVe II bass reflex ports. Monitor Audio has been using this straight-rifled port design for well over a decade, pointing to its speed of air-movement and transient response as justification.

Of course, it’s important to have some reassuring and undramatic numbers to balance out all the heady abbreviations. So the Gold 200s have a nominal impedance of 4ohms, a claimed frequency response of 35Hz to 50kHz, and sensitivity of 88dB/w/m. All perfectly sensible.

At almost exactly a metre tall when standing on its four outrigger feet with spikes attached, a little over 28cm wide and just shy of 39cm deep, each Gold 200 is a manageable size for any medium-to-reasonably-large size room, even if at 22kg each they aren’t the easiest for one person to unpack and install.

The cabinets themselves feature very agreeably curved corners, extremely smooth finishes and a curious ‘soft-touch top trim’ – this is presumably designed to appeal to those for whom a leather-topped writing desk is the pinnacle of interior decor sophistication. The grilles covering the drivers are, naturally enough, held in place magnetically – so there are no unsightly protuberances or recesses spoiling the look of the front baffle. 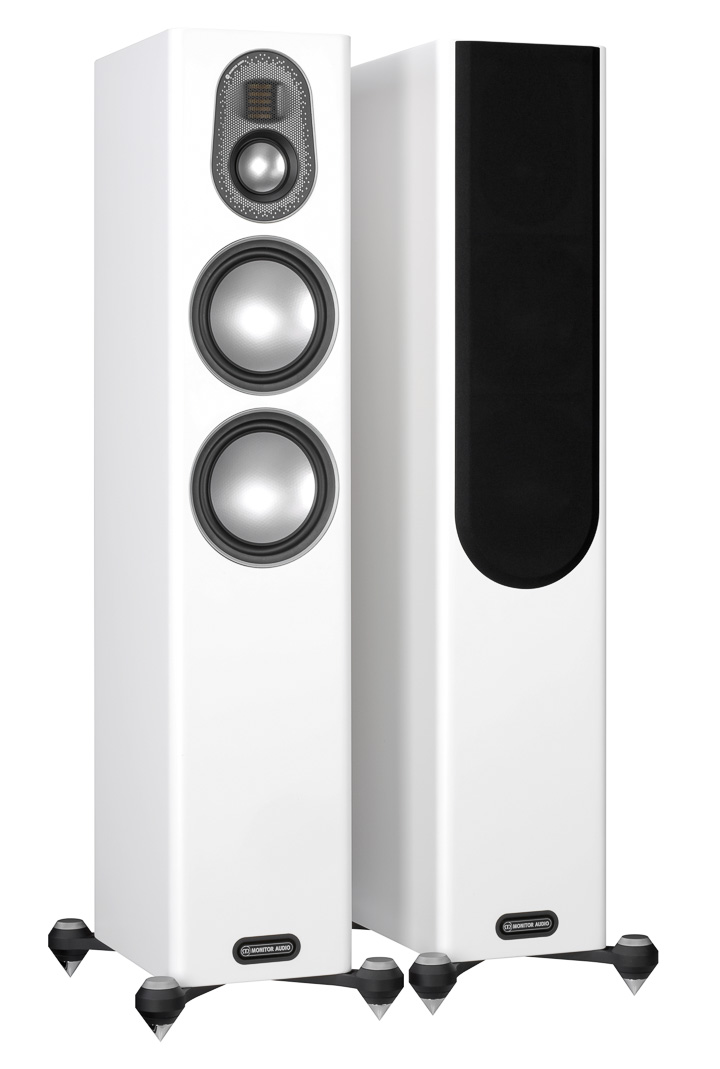 Painstaking and time-consuming experimentation suggests the Gold 200s are happiest when positioned at least 40cm from a rear surface, and gently angled in towards the listener’s seated position. So that’s where they stand throughout, driven mostly by Naim’s venerable NAP100 power amplifier. AVI’s even-more-venerable Laboratory Series Integrated gets a look-in too.

It’s immediately apparent the Gold 200s don’t require much in the way of heat in order to make their case as a faithful, elegantly judged listen. Smog’s Dongs of Sevotion (Drag City) is a recording which hides its emotions in the finest details – on a system more concerned with the broad strokes, it’s an album that can sound matter-of-fact and jaded. But the Monitor Audios see through its reticence and understatement, attending to every detail in a manner both casual and fanatical.

The leading edge of Bill Callahan’s guitar sounds are loaded with information, not only of the G&L ASAT Classic Thinline itself but of string condition, finger moisture, plectrum weight… and the Gold 200s do this without sounding over-analytical or prissy. The swing and dynamism of the playing sounds as natural as it ever does, but there’s a fuller description here than is available from less judicious loudspeakers. Callahan is an elegantly accomplished technician, but he’s not a show-off. It’s a mind- and skill-set the Monitor Audios understand entirely.

This torrential level of communication is maintained throughout the frequency range, from the textured and disciplined low frequencies to the smoothly shining top end. Kick drum sounds are as much to do with the connection of beater on skin as with the sound of the resulting impact, and the details of bass guitars extend much further than the simple fact of air movement. The Gold 200s are ever-alert to the minutiae, and integrate all the information in a believable and unfussy way.

The side-long examination of Marvin Gaye’s Trouble Man by Grover Washington Jr on Soul Box [Kudu] is an even greater test of dexterity and expression, but the Monitor Audios remain authoritative. The recording simmers, fulminates, and simmers again in the long-established jazz tradition, and each dynamic variation is paid close attention to – Eric Gale’s virtuoso guitar (under)playing contrasts strongly with Washington Jr’s strident saxophone in terms of volume and drive, and it’s distinct again from Ron Carter’s fluently supple bass-playing. The ability to express glaring variations without making them sound remote from each other is a valuable one.

Effective integration is key to the Gold 200s’ overall sound, and they succeed in managing rhythmic details as commandingly as details of tone or timbre. They aren’t about to try and disguise the fact that Blackalicious’ If I May [Mo’ Wax] is a cut-and-paste collage from numerous sources, but they allow it all to fit together harmoniously even as the elongated bass sounds anchor it. There’s nothing overblown or attention-seeking about the Monitor Audios, and consequently none of the droning at the bottom end that less even-handed speaker routinely introduce.

No matter if they’re dealing with the massive attack of Saint-Saens’ Danse Macabre [Decca] or the unaccompanied voices of Ensemble Marani’s Tsintskaro[Buda Musique], the Gold 200s remain organised, dynamically potent, and tonally convincing performers with composure that borders on the unflappable. And, it’s worth pointing out, they can do all this at volumes both negligible and oppressive. Playing quietly doesn’t hamper the Gold 200s’ ability to deliver the entirety of the frequency range with the required impact, and playing at antisocially loud levels doesn’t spoil their harmonic balance.

But while they have no difficulties describing the scale of the Saint-Saens piece, nor in defining a convincing and easily understood stage for the performers, these speakers don’t escape the confines of their own beautifully finished cabinets as convincingly as they might. Everything that happens on the stage is explained in full and in detail, but it all seems to happen between the two towers. Stereo focus is impressive, but there’s no getting the information to expand much beyond the speakers no matter how much fiddling with positioning is indulged in. There’s great unity and coherence to the Monitor Audio Gold 200s, but there’s relatively little of the wide-screen element some similarly sized speakers can deliver.

Which simply goes to demonstrate that nothing’s perfect (but we knew that all along anyway, right?), least of all in the world of loudspeakers. And whilst the Gold 200s are short of perfect, just like all their rivals, they demonstrate some real strengths and areas of convincing expertise. As suggested earlier, there’s no ripping up of the Monitor Audio rule-book going on here, let alone the wider Loudspeaker Manual – but in terms of finessing and honing a long-in-the-tooth technology the Gold 200s are an unarguable, categorical success.

The reasons to give the Gold 200s strong consideration are numerous, with their naturalistic and even-handed approach high among them. The reasons to dismiss them are few, and are more to do with personal preference than any tangible Monitor Audio shortcoming – if you personal preference is towards an over-caffeinated, up-and-at-’em presentation, for example, you’ll likely find the Gold 200s a little too refined. If you crave a super-wide presentation above all other sonic talents, they’re not for you either.

For everyone else, though (everyone who’s in possession of an appropriate system, an appropriate listening space and the appropriate funds, at least), these are a very diverting option. Diverting-going-on-compelling, in fact.