Mobile Fidelity’s Impressive Studiodeck turntable and Studiotracker cartridge were reviewed in Issue 156, and rightly applauded for their build quality, excellent sonics, and set-up ease. During the process of putting my final touches on the Studiodeck review I must have inadvertently stepped on shamrock because right before I was ready to (regrettably) box up the Studiodeck, I found a compact little package waiting for me out on the doorstep. Imagine my good fortune, the Mofi Studiophono had arrived in the nick of time as not only was it potentially a great phono stage, it was a perfect excuse to keep the audition going a bit longer and have the Studiodeck sitting in my system for another few weeks. If you are still catching up on Mobile Fidelity’s latest equipment offerings, let me give you a quick recap. Mobile Fidelity, that brand you used to associate with high-end LPs, has now – via its Studiodeck and Ultradeck product lines–positioned itself as purveyor of the whole analogue front-end experience. The higher echelon ‘ultra’ line and the budget friendlier ‘studio’ series both include the full turntablist monty: cartridge, turntable, and now phonostage. The Studiophono reviewed here – like the rest of the Mofi equipment family – is a long time coming and the product of several years of meticulous research, development, and design. This prolonged design effort was led by the legendary audio electronics whisperer Tim De Paravicini and that alone demands a closer look, if only to appreciate his valued mark on the Studiophono.

Tim De Paravicini is a global analogue renaissance man of sorts who has travelled many roads over the past decades, working with EAR, Musical Fidelity, and Luxman, to name a few of his more recognisable stops. Tim was commissioned some years ago by Mobile Fidelity to completely rebuild a critical component of Mofi’s vaunted GAIN 2 mastering chain: a Studer A-80 ¼’’ reel-to-reel. Based on the success of this venture De Paravicini was uniquely suited to captain the design of the Studiophono as he understood the technical aspects and standards Mobile Fidelity sought to deliver better than anyone: to create an ultra-wide bandwidth, high transparency phono stage truly faithful to original master recordings. Tim de Paravicini oversaw all circuit design and part selection to accomplish Mofi’s mission for the Studiophono. Quite an unexpected and welcomed pedigree for a £249 component, I think you might agree. 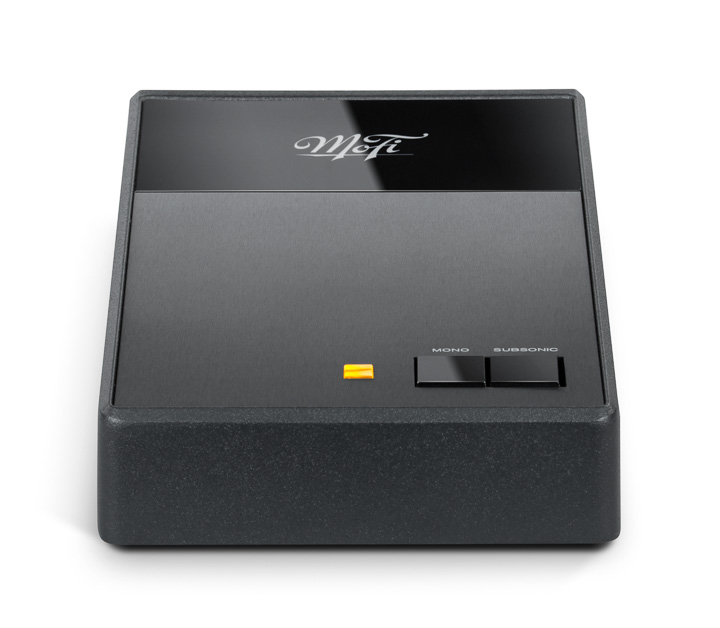 The Studiophono is a perfect aesthetic compliment to the Studiodeck turntable and makes a handsome second step in your analogue chain. While sharing a visual connection to the Mofi turntables, the Studiodeck was not engineered with any specific sonic synergy in mind and was intended to be a piece of equipment that can stand on its own and be added into any system. The vibration resistant metal chassis is well propertied at 3-3/4’’W x1-1/4’’ H x6-5/8’’ D and with its low profile can squeeze into most tight spaces and does not necessitate its own shelf on your rack. On the operations side the Studiophono allows a wide array of gain (between 40dB and 66 dB) and loading adjustments (75 ohms-47Kohms) that will accommodate virtually any moving magnet or moving coil cartridge. Without making any adjustments Studiophono is set to operate out of the box with most high-output moving magnet or moving iron phono cartridges. If use of a low-output moving coil cartridge is desired, quick and easy adjustments are made on the underside of the unit with a bank of DIP toggle switches that you thankfully don’t have to be a PhD to figure out how to use. For the power supply, the Studiophono is equipped with a balanced external power supply that was chosen to keep noise away from the low-level circuitry in the relatively small chassis.

The only two (and therefore deemed most prominent) features on Studiophono are option buttons found on the bottom of the unit next to the power indicator light: a ‘Mono’ button and a separate ‘Subsonic’ button, both of which are meant to enable Studiophono users to dive a layer deeper into their recordings. When operating in Mono mode the two channel inputs of the Studiophono’s second stage amplifier are connected together and are said by Mofi to be the next best thing outside a dedicated Mono cartridge. I found the Mono feature to have a substantial effect that did seem to solidify and enhance the depth of some of my most treasured mono records like Analog Productions’ beautifully done 2015 reissue of Pet Sounds [Capitol], and a near-mint copy 1967 original of the Byrds’ Younger Than Yesterday[Columbia]. The added stability and enhanced soundstage layering added to the recordings when using the mono button was quite remarkable. If recent high profile Mono reissues of the Beatles catalogue, Bob Dylan, or any number of others are floating your boat currently, this feature on the Studiophono is highly recommended for an audition and worth the price of entry. The Studiophono’s “Subsonic” feature was a bit less impressive. The idea behind the subsonic filter is to prevent amplifier robbing output or ‘woofer pumping’ caused by pesky warped records. The subsonic filter is said to kick in around 20Hz the filter will go down 2.5 dB, and it rolls to 27 dB down once 5Hz is reached.  This sounds like a fine Idea, but maybe all my records were in too good of shape to need the help? I did not notice much evidence of any sonic impact toggling this switch on and off with any number or records, some very clearly warped. Nice to have as an option and maybe your playback will benefit, but I can not vouch for the effectiveness of this feature after my audition. 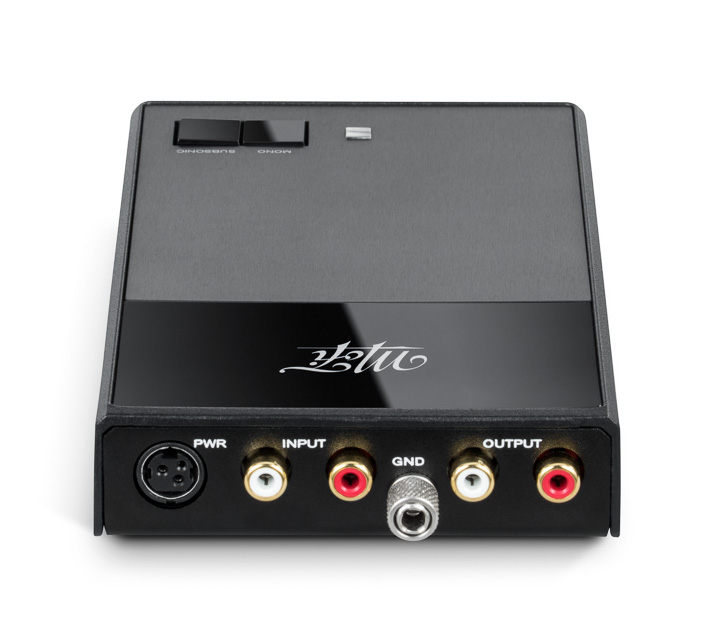 Given the unit’s ultra-affordable price the natural assumption would be to listen to the Studiophono expecting that a budget component of this calibre would quickly reveal itself to pick one aspect or hug one side of the sonic spectrum for dear life. Will they be clawing for warmth or scrapping for detail? Will they have to sacrifice response in the low end or high end? You get this picture and unfortunately all too many components listed under £300 continually find ways to remind us how true this assumption can be. Well some surprises are good ones after all; Mobile Fidelity has figured out how to give the Studiophono a healthy dose of sonic balance. Aided by an exceptionally quiet noise floor, I found over a wide variety of records that the Mofi Studiophono was an alert guardian of my precious analogue signal. Dynamics and detail were always present and accounted for and the sound never lost that “easy-does-it” signature analogue charm. Curtis Mayfield’s ‘Pusherman’ is quite a Superfly[Curtom] guilty pleasure and exemplifies what the Studiophono does best. An original 1972 copy of Superflyalways seems to find its way onto my platter because of its incredible atmospherics coupled with an intimate presentation that never seemed to be properly flushed out in a multitude of subsequent reissues. The Studiophono illuminated the early seventies web of tension very well that Curtis was trying to hip us all to ahead of his time. The stone groove bass line, the frantic wah wah guitar, and Curtis’ gravy smooth vocals all sparkled and seemed to have a liveliness about them. There is much to take in on the Superfly, but a harsh note is not one of them. Often I find this recording particularly revealing because with so many competing sound styles an overly lush phono section will quickly allow the instrumental interplay to turn into mush. The studiophono was able to whip the track into shape and keep everything crisp while never losing a rounded and open feel that makes the music so compelling. I was floored by the sonic sophistication the Studiophono was able to bring to my audition. The Studiophono on its own merits and even more so paired as a combo with the Studiodeck & Studiotracker outpaces anything else on the market I have heard at its price point. Higher end phono stages I had on hand like the Fosgate Signature (10x the Studiophono’s price) were certainly more musical, more nuanced, and more delicate with the sound presentation, but the margin was not as great as you might think – not by a long shot! The Studiodeck is an all star performer and does not give you the impression in any way you are missing out or making sacrifices at its £249 list price. The Studiophono will be a valued and integral part of your front-end chain, not just a budget component that is checking a necessary box for you to be able to play your records.