Pioneer launched an ultimate flagship headphone called the SE-Master 1 a couple of years ago. Open-backed, hand-crafted, built to order, made of unobtanium-wrapped fantasticium, with ear-cups made of unicorn eyelids… that sort of thing. There’s a waiting list, and we’re not exactly at the front of the line. Fortunately, Pioneer made a £1,000 closed back SE-Monitor 5 version for the rest of us, and very good it is too.

The SE-Monitor 5 actually pulls a lot of the technology developed by Pioneer in the SE-Master 1, and production engineers it so that it’s more regularly available and attainable. They were also designed from the outset to be comfortable enough to be worn at home for extremely long periods, despite their 480g weight. They are, however, quite large. This is actually the secret to their comfort, as they are very much ‘over ear’ designs: if you are small of head, ‘over ear’ means ‘covering everything from temple to jawline’. But this, coupled with very soft, very padded, yet very breathable ear pads and a very lightweight, but well-built frame and headband, means they really can be worn all evening with no real stress on the listener. Oddly, there isn’t a lot of padding around the headband, but this works in the Pioneer’s favour, as it lightens the load considerably. I wore these headphones for an entire evening’s Radio Three listening and never felt the need to even reposition them. OK, so they aren’t so comfortable that you could sleep in them, but they are comfortable enough that you can easily doze off with them on. However, the Pioneer comfort zone was enhanced by Winter-time listening; I suspect during Summer the density of the foam in the pads might prove a little sweaty, especially in a closed can design.

These are very much home headphones. Although the closed back design might lend them to portable listening on the move, the size of the headphone and its more sumptuous looks push it gently toward home use. In fairness, they do look good on the head (so long as your head is large enough) and great on the stand. I’m an occasional sucker for a piece of well-turned luxury and this has that very obviously luxuriant look and feel, but without too much overstatement. In other words, ideal for refined use in the home.

I’m also a bit of a sucker for good packaging and this is above average. A nice big box, with a presentation case and a spot of plush doesn’t go amiss. OK, so it’s not the kind of locking case found in the very top models, but it’s a lot better than a bubble-pack. The pack is also packed… with goodies. There are three sets of cables (3m long with jack, and two 1.6m long cables; one with a standard 6.3mm jack, one with a 2.5mm balanced connection). These are all very well made but loosely braided cables with a nice woven outer jacket. The connectors meet the headphones with two standard 3.5mm jacks, so replacements are not a problem. The cables again point to home use; they are not the kind of cable you can wind around your headphones (don’t, just don’t do that!) and throw in a bag, as that loose braid will catch and snag, and the strain relief on the wires doesn’t feel substantial enough. There are also two sets of ear-cups (3D memory foam and pleather) and these do have different loading and so slightly different tonal balance.

The core to this and the SE-Master 1 is the dynamic driver, a single 50mm diameter nano cellular fibre design. That’s wood pulp to the uninitiated, albeit wood pulp that’s been carefully treated. The other big aspect taken from the SE-Master 1 is the patented ‘Double Headphone Chamber’, which is basically a main chamber with ported sub-chambers for better bass response.

In generally, I really like the look of these headphones. The contrasting light metal around the yoke and headband, with a contrasting copper ring, black cups, and rose-gold strain reliefs on the cables, shouldn’t work together, but actually looks refined and elegant in reality. 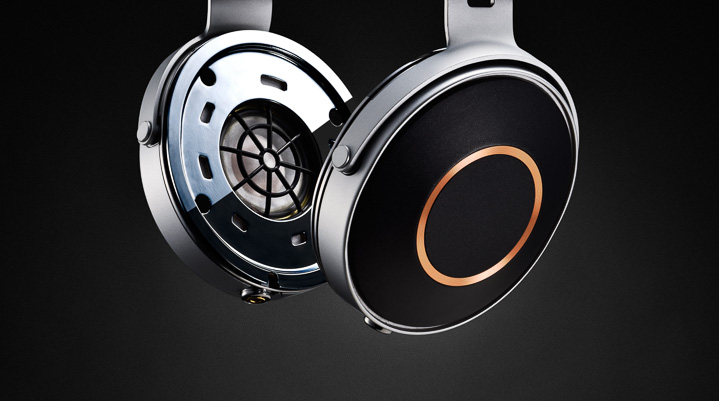 In use, these are decidedly easy headphones to drive, and don’t require a hefty headphone amp to drive them. It is about quality not quantity here, as the 99dB efficiency and benign 40-ohm impedance means there is no need to be exceptionally fussy in partnering these headphones. I used them with a faithful old Audiolab 8000A (with an adaptor) to great effect, and into a new Pioneer/Onkyo DAP for both single-ended and balanced operation. Balanced does make a difference here, and you should go for it if possible.

There seem to be two schools of thought in headphone design. The first is the audiophile concept, which means a flat frequency response, even if that means the headphones end up sounding bass light. The other is the tailored approach, which over-rides the flat frequency response for a more sonically acceptable presentation. That way, madness lies. Or, more accurately, Beats lies. In all honesty, most headphone makers go somewhere between the two poles, making a ‘mostly accurate’ design with extra bass. Not Pioneer!

Instead, Pioneer chose to make the SE-Monitor 5 as flat as they could. This means there is a lot of bass, in terms of specific low frequencies, but not much in the way of bass slam and boost. For some, that would be an instant deal breaker, but for others, they will happily trade bass weight for bass accuracy and bass speed. I’m very much in this latter camp. I would rather hear the sound as it was recorded, even if on headphones that ultimately sounds rather thin and bass light because you can fix that in EQ if you so desire.

I have to say this is one headphone where first impressions don’t count. My first audition of the Pioneer SE-Monitor-5 was unfavourable at best. As described, it was too thin and too bass light. But, it was tonally accurate, and it was fast. Really, really fast. Changing to the foam pads helped enormously, as they seem to have a natural LF boost. As did removing my glasses (they were breaking the pad’s seal around my ears). But it was still bass light. 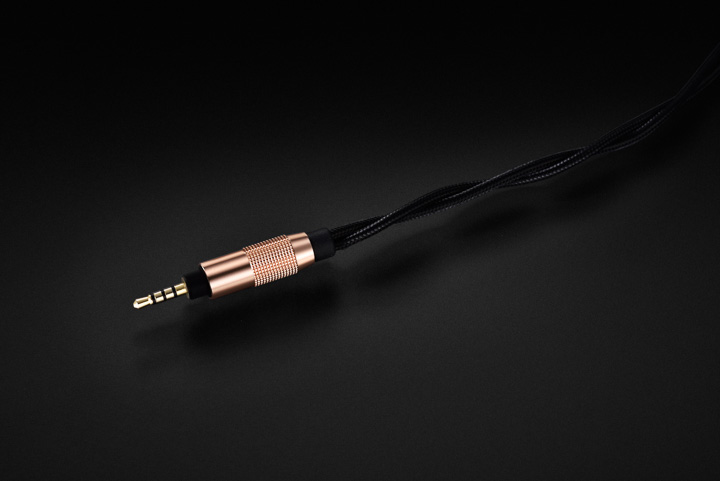 As I listened further, it became clear that it wasn’t bass light, but instead I had slowly grown accustomed to that bass rich tonal balance of even supposedly accurate headphones. Gradually, I was deprogramming myself of the taint of older headphones, and at that point I began to see what the SE-Monitor-5 was trying to do, and it dawned on me that it’s exactly what I try to do with loudspeakers. I was a convert.

Now I listen and hear an extremely open and extended midrange, free from those mild lifts at 1kHz and 8kHz that seem to be there to make voices nicer. Yes, there’s still a lack of deep, thrumming bass from these headphones, as they trade bass speed over bass depth. I found I can live with that, not only because that bass speed is exhilarating, but because I want that midrange accuracy and treble extension.

I found listening to the Pioneer SE-Monitor-5 with the foam ear cups worked best. This gave a very ‘in the studio’ feel. So I gave them something difficult to play: ‘Hat and Beard’ from Eric Dolphy’s Out To Lunch[Blue Note]. The interplay between musicians here is vital to getting the music right, or listening to a complete mess. And this was when the penny finally dropped – that bass speed is the key to getting this music right, and even slight deviations from neutrality just get in the way of the performance. Big bass was out!

After that, many of the other great parts of the performance of the Pioneer SE-Monitor-5 just began to slot into place. It’s not a lateralised sound, and there is some width to the sound, placing musicians outside of your head. Treble extension is excellent, and the overall presentation is one of soft-spoken calm and accuracy.

I suspect there will always be people who will never like the sound of this headphone because it doesn’t have a full and deep bass. This might also be down to the choice of music – I didn’t feel the need to listen to a lot of rap, reggae, or rock through the SE-Monitor-5. 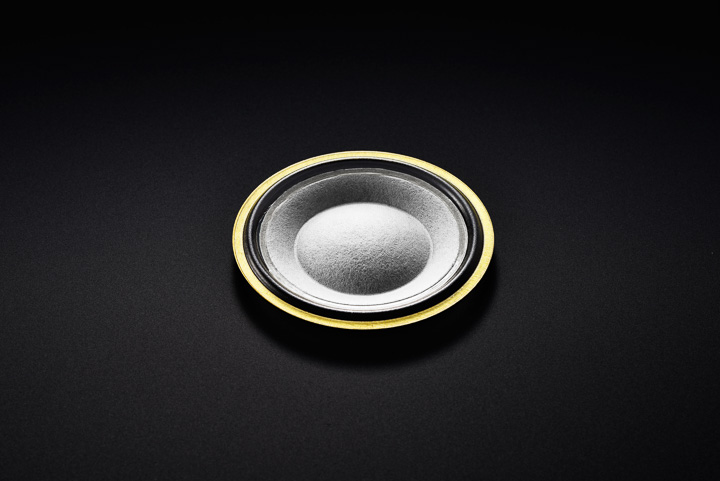 Pioneer’s SE-Monitor-5 is a bit of a grower. Listen to them the first time, and you might come away underwhelmed. Try again because it’s worth putting in the effort. You might find that you discovered a real joy of a headphone, one of the best closed back designs on the market at this time. That’s not overstating the case – if you aren’t just listening out for big, deep bass and love to hear what a good, truly accurate transducer can do for your music, the SE-Monitor-5 might just get under your skin.