Editor’s Note: This review was commissioned and originally published before Ken Ishiwata’s recent departure from Marantz!

I thought I was doing well to get 30 years under my belt in this business but Ken Ishiwata is way ahead of me, as the precious gem in this amplifier’s name suggests he has been with Marantz for 40 years. And then he was with Pioneer for 10 years before that. Clearly, this is not a young man’s game anymore.

The PM-KI Ruby looks and functions as an integrated amplifier with all the convenience and reduction in cabling that that promises, yet under the skin, it has been built like a pre/power combination from the mains transformer onwards. This is because both the active preamplifier stage and 100 Watt output stage have their own separate power supplies, but it doesn’t weigh a ton (or even a tonne) because the output stage is a Class D type with a switching power supply. This is an approach that was once the preserve of Chord Electronics and Linn but its popularity is growing rapidly for a number of reasons. One of the biggest reasons for larger-scale manufacturers is legislation that prohibits inefficient electronics from being sold in key territories including the EU. Class D is also on the rise for economic reasons; you can make a far more powerful amplifier for a given budget than you can using conventional Class A/B technology. But the most important reason unless you are a fervent polar bear enthusiast is that Class D has been proven to sound remarkably good by a few key players and this trend is likely to continue.

I was highly impressed with the Kii Three active loudspeaker last year and that has Class D amplification onboard. It was designed by Bruno Putzeys, a master of this art, so when Ken Ishiwata mentioned that PM-KI Ruby differs from most Class D designs by virtue of putting the feedback after the output filter and credited this design to a ‘Belgian engineer’, Bruno’s name sprang to mind. But that’s just a guess; I suspect that there are some other canny audio engineers in Belgium. Ishiwata himself lives in Antwerp (and works in Eindhoven, Holland. Go figure!) so while he started his career at Marantz as a bridge between manufacturing in Japan and their European base he now spans a somewhat smaller gap that nonetheless appears to be bearing audio engineering fruit. 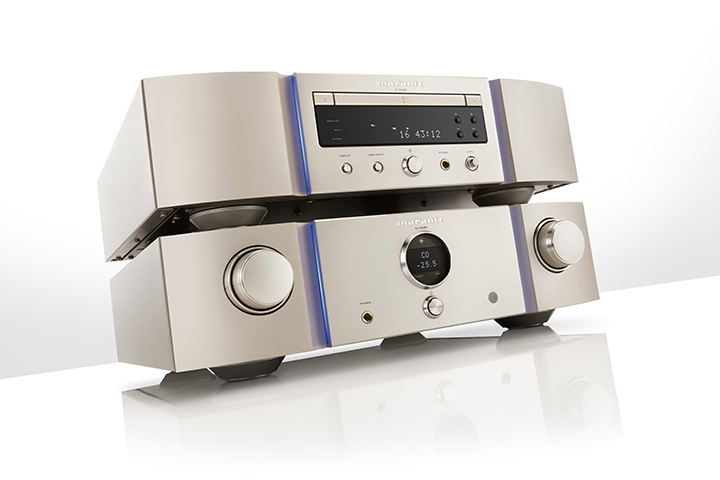 The PM-KI Ruby is an analogue amplifier; all digital duties are handled by the partnering SA-KI Ruby SACD/CD player and DAC reviewed in the January issue (168). It only has single ended inputs, which differentiates it from the rather more pricey PM-10 (externally and internally, the PM-10 is a balanced amplifier). But there are two pairs of inputs that stand out by virtue of silver plating instead of the ubiquitous gold finish, silver being a better conductor but one that’s rarely used because of its tendency to tarnish. The second pair of silver terminals is for a phono stage, and not just an MM one at that. In fact it’s a rather special part of the amplifier that Ishiwata is particularly proud of; it’s a discrete, cascaded design with an initial gain stage for MC that acts like a head amp before the EQ stage, which is a very rare approach outside of tube preamplifiers. Ken has long been a tube fan so it’s not surprising, but the fact that it’s a superior phono stage to the one in the PM-10 according to Ken is surprising.

Switching between MM and MC settings is done via the display, you can’t adjust gain or impedance and unusually the MM impedance is set at 39 kOhms rather than the standard 47 kOhms. Other features accessible via the setup include bass and treble trim and different levels of attenuation applied when ‘mute’ is selected. The back panel includes four line inputs atop the fancy silver pair, two recorder outputs and ‘power amp in’, which could be used with a better preamplifier or an AV processor as it effectively goes straight to the power amp section of the PM-KI Ruby and allows it to be integrated into a surround system.

My first experience with this amplifier was in tandem with the matching SA-KI Ruby disc player/DAC and Revel 126Be loudspeakers, which produced an extremely polished and refined result but not one that was in danger of causing the listener to break a sweat. This was a case of three rights not adding up to a wrong but neither was it a successful combo, so I concentrated on the player in a variety of systems and left the amplifier to fend for itself. And it fended rather well once I had found a sympathetic speaker. That said it didn’t do badly with my usual choice of transducer, the PMC Fact.8, which brought out the musical skills of the PM-KI Ruby rather well. I spent some time listening to vinyl spun on a Rega RP10 with Aphelion MC cartridge and was pleased to find that the MC stage on the amp had sufficient gain to produce a dynamic result where the recording warranted it. Not all my favourite music is that well produced, however, and where compression has been used the Marantz will make it fairly clear. It’s a usefully transparent amplifier albeit one with a refined presentation that can fool you into thinking that it’s smoothing over the fine detail. In fact, it’s just very fine grained and revealing – put on something raw and it will sound that way. There’s decent power and drive on Ryley Walker’s Primrose Green[Dead Oceans] but it is reined in by the annoying powers of limiting. And yet that doesn’t get in the way of the music, which is close to the performance you’d expect from a decent standalone phono stage.

Bill Evans’ Waltz for Debby[Riverside] sounds its age after that but also reveals the nuances of playing from Evans and his band in the context of a distinctly live setting, one that must surely have influenced that old hi-fi favourite Jazz at the Pawnshop{Proprius]. It did occur to me as I pushed the volume to the mid-twenties on the minus decibel scale that it would be alarming if I were to switch to the line input and put on a high level digital recording, which I’ve done enough times now to be wary, but it makes a good case for each input to remember the level it was last used at. The half dB volume scale is very nice though; even with the remote you can make fine adjustments with ease. I did switch over to a Naim NDX 2 to see what the Evans would sound like from that source and have to say that it made a good case for seeking out the vinyl. 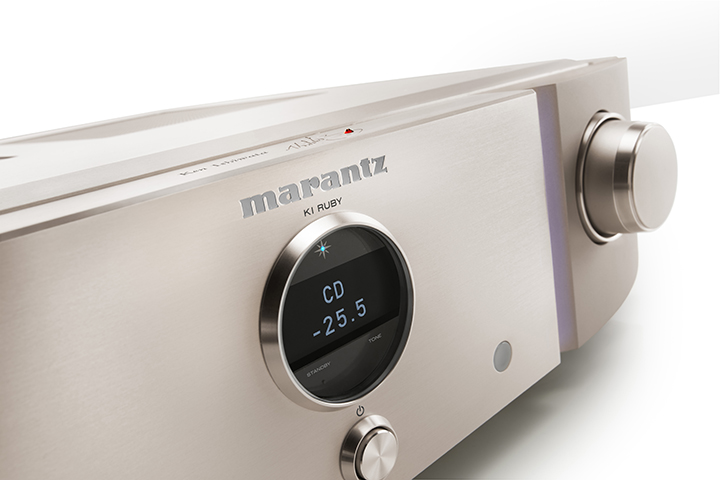 At this point I switched to a loudspeaker that Ken Ishiwata seems to like, the Q Acoustics Concept 500, which he was using in his fabulous demonstration room last time I visited back in 2017. This partnership has an openness and warmth that’s very appealing with excellent bass extension and control, the double bass on ‘Waltz for Debby (Take 2)’ being particularly eloquent and the voices in the background unusually realistic. For a change I tried Codename: Dustsuckerby Bark Psychosis [Fire], who picked up where Talk Talk left off, ish. This was as fulsome as ever but nicely controlled so that you could hear into the mix; in fact, you could almost swim into it, such is the thickness of the low end. But when a distorted guitar cuts in there is plenty of edge on it, but not so much as to discourage high level listening and I had to let the track run. The same went for several other pieces, it’s clear that this Marantz has a facility for opening up the music so that you can hear what’s good about it.

It doesn’t do this with a charming balance but by letting all the important details through in a coherent and fluid fashion. It reveals big contrasts in recording sound, Lou Reed’s voice on ‘Walk on the Wild Side’ [Transformer, RCA] is very nice, a little sweetened perhaps but engaging nonetheless, whereas the acoustic guitar that Joni Mitchell plays on ‘A Case of You’ [Miles of Aisles, Asylum] sounds positively scrawny, but the beauty of the performance is clear and wide. This is especially the case when the band plays ‘Carey’ with her and the stage opens up to let some remarkable playing take place.

At an age when many hang up their interconnects, Ken Ishiwata is still doing great things with audio electronics. And he’s doing it for a company that knows how to build very serious pieces of kit, chattering relays notwithstanding. The PM-KI Ruby is a far more musical and enthralling amplifier than it first seems; give it some time and you’ll fall under its spell. 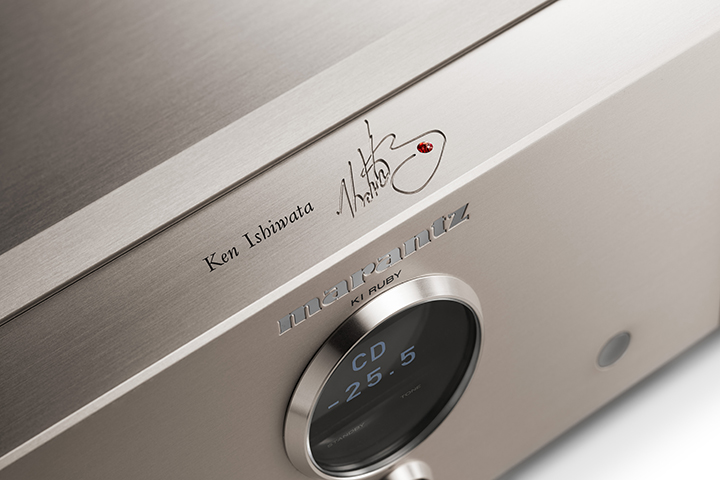