The Kuzma XL and Hi-Fi+ have a long history together. We first looked at the high-mass, twin AC motor turntable way back in Issue 41 (when it was called the Stabi XL, and later the XL2 to distinguish it from the four-motor XL4) and liked it so much we gave it an award two issues later. Then, we looked at it once again when its four-motor upgrade hit town in Issue 53 and once again in Issue 124 when the XL DC was released, replacing those four powerful AC motors with a strong, stable and quiet DC motor. We even revisited it as recently as Issue 196 as a complete package with 4Point 14 arm and CAR 60 cartridge, as a mark of the best the standard bearing bearer can get.

There’s a reason for all those column inches. The original Stabi XL set a standard by which all other turntables should be evaluated, and its periodic upgrades mean it has continued to do so to this day. Also, unlike many high-end projects that get replaced, that upgrade path keeps existing customers in the loop. Time and technology move on, though, and the original XL2 and XL4 models are no more, but those wanting even more from their already world-class XL DC can opt for the XL AIR, which as the name suggests uses an air bearing. As a result, it has a natural partner in the Kuzma Air Line air-bearing tonearm, although the two cannot share the same compressor, as well as arms like the outstanding 4Point 14… and the beauty of the open-plan design of the XL AIR is adding an extra arm just means adding an extra arm tower. 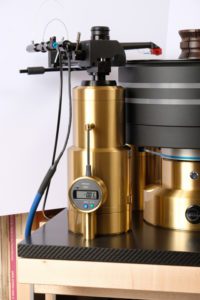 But let’s recap, looking at the original XL design first. As discussed, the XL turntable started its journey as a conventional high-mass turntable with a traditional (ruby) inverted ball bearing. This bearing housing has remained unchanged from the original Stabi XL to the latest XL DC; this longevity of design runs through Kuzma’s designs like a red thread, with models like the Stabi Reference remaining essentially unchanged (except for a power supply upgrade 12 years ago) since 1992. However, there’s a difference between ‘long-lived’ and ‘forgotten’ and Franc Kuzma is always on the lookout for a way to improve his products, without compromise or disenfranchising existing users. This means that just as the XL4 took AC motors to their limit, the XL DC went as far as it was possible to go with the original bearing. The next goal then becomes how to make a high-mass, high inertia behemoth of a turntable become even more independent of and unperturbed by all the usual mechanical and environmental inevitabilities that hinder a perfect platter rotation. This is ultimately a question of making an already excellent turntable an even more perfect, stable, quiet and smoothly rotating platform, allowing the last scintilla of the music stored and hidden within the grooves of a record to be successfully realised. For Franc Kuzma, the solution was obvious; an air bearing. And, like all obvious, no-brainer solutions, the move from ‘hypothetical’ to ‘product’ took a lot of time and a big effort to realise.

When compared with a conventional, mechanical (shaft and a ball or a sharp point) bearing resting against a hard surface and rotating in a bath of oil, an air bearing allows for significant improvements with virtually zero friction or vibration within the bearing itself. In addition, a properly designed air bearing (not just something simply floating on a cushion of high-stream airflow) can take a considerably higher load without feeling wobbly or otherwise inadequate to achieve almost perfect rotation.

This allows the XL AIR to support twice the weight (rotational mass) of its platters compared to the standard variant. In addition to the standard 22kg of the XL platter (a sandwich concept with aluminium and acrylic layers bolted together in a pre-stressed manner, itself providing solid damping against vibration), the XL AIR has a secondary 22kg bronze platter positioned underneath the main platter. Bronze was chosen for its own density and excellent damping properties which, importantly, do not present any kind of ‘conflict of interest’ with the materials within the top platter. The total rotational mass of the XL Air is now 44kg, including the relatively light aluminium subplatter.

A turntable air bearing consists of two bearing surfaces. One (on the top) deals with the vertical load, while the cylindrical hole (at the bottom) takes care of the horizontal load. The XL AIR bearing has a substantial shaft (31mm diameter) and 60mm of thrust plate. All bearing surfaces have been made from a porous material with millions of tiny holes to let the pressurised air out into space. This creates an environment for very uniform air pressure of 4 bar inside the bearing’s gap (tolerance) of just five microns. This ensures an enormous degree of air bearing stiffness with zero movements (free play) in any plane of action. Just as with the traditional XL, the housing of the air bearing is fabricated out of two massive solid brass elements, clamped together to yield good damping properties. This means the conventional bearing housing of an XL2 and XL4 (once upgraded to the DC motor drive), or XL DC can be converted into an XL AIR in only a few simple steps… if you are a powerlifter!