There was a time not so long ago when Sonus faber was the only Italian loudspeaker brand that had any real profile in Britain. Thanks largely to the efforts of the distributor at the time, the brand enjoyed a high-end reputation matched only by the beautiful finishes of the speakers themselves. We now know there were many other Italian speaker builders many of whom employed the walnut stave cabinets favoured by Sonus faber, but they never cracked the UK to the same degree. The company became part of a much larger organisation a decade ago but its early success means Sonus faber still has a favoured status on these shores, one that should become more widespread with the introduction of the relatively affordable Lumina range. 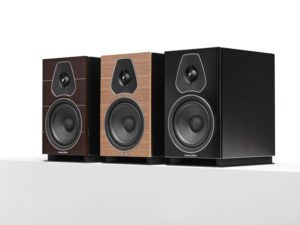 The Lumina II is the larger of two stand-mounts in the range and was introduced earlier in the year to cover a variety of roles for the music and movie enthusiast. A front-firing slot port is discreetly placed under the front baffle which means it can genuinely be placed in a bookshelf for stereo or surround channel duties, best results for music will of course be achieved with the Lumina II on a stand but it’s nice to have this option. The cabinet comes in three variants, all of which look very swish; my preference is for the dark wengé veneer with maple inlays forming horizontal stripes but the lighter walnut with the same pattern of inlay is very nice too. The third option of piano black is probably more to British tastes, however, but it would be interesting to know what the market for a more sophisticated stand-mount actually buys. All three baffle finishes are complemented by a leather wrap and the cabinet sits atop a shallow fluted base that provides the reflex port. The back panel offers bi-wire terminals to keep the cable enthusiasts happy but one wonders how many of the style aficionados that go for a speaker like this will want more wire than is absolutely necessary for their minimalist condos.

Under the skin, this Lumina is more substantial than the fancy finish suggests with a multilayer wooden front baffle to give the pair of drivers a rigid foundation from which to operate. The main mid/bass driver is a six-inch (150mm) unit with a paper cone that’s made by Sonus faber and appropriately but subtly branded, it’s centred by a rubber roll surround. The tweeter is one of Sf’s DAD or damped apex dome types which are designed to combat phase issues and thus provide better high-frequency results. It’s a silk dome with a roll surround that brings the diameter up to a large 29mm.

The Paracross topology crossover is what Sonus faber calls a ‘semi-balanced’ circuit where some of the reactive components (capacitors and inductors) are placed in the negative rail of the circuit. Apparently, this reduces sensitivity to RF interference, which is not something that gets mentioned often in regard to speakers but has got to be a good thing. There is nothing specific about setting up the Lumina II in the owner’s manual but there are some good basic set-up suggestions along the lines of putting speakers and listening position at points a third of the way from the front and rear walls. I used 60cm Custom Design FS104 Signature stands and started off with the Lumina IIs fairly close to the rear wall and toed in toward the listening position, a third of the way across the room approach doesn’t usually work for me and gives a small speaker like this no help in the bass.