Reviewers both love and hate in equal measure reviews that basically write themselves. We love them because they are so easy to write – words fall onto the page without a care. We hate them for pretty much the same reason, as we barely get a chance to place our own fingerprints on the review itself. The KEF LSX is one such review; about 20 seconds after I had plugged it in, the review was practically fully constructed in my head, nothing in the extended process of listening swayed that early impression, and only one out-of-the-blue event was worth adding. None of which should detract from the LSX… quite the reverse in fact.

The simple way of thinking about the LSX is that it’s a smaller, cheaper version of the LS50 Wireless wrapped in a range of natty cloth finishes, and is designed to fit almost anywhere (hence the ‘bookshelf’ description – they stand as high as a paperback and can be legitimately used in a bookshelf as long as you have provision for a couple of power cables and ideally a signal cable or two). The downside to that pithy description is it dismisses the substantial amount of R&D work that has gone into the LSX in an attempt to try and squeeze a quart into a pint pot, and do it without it sounding like someone throwing a sack of spoons down a fire escape in the process. 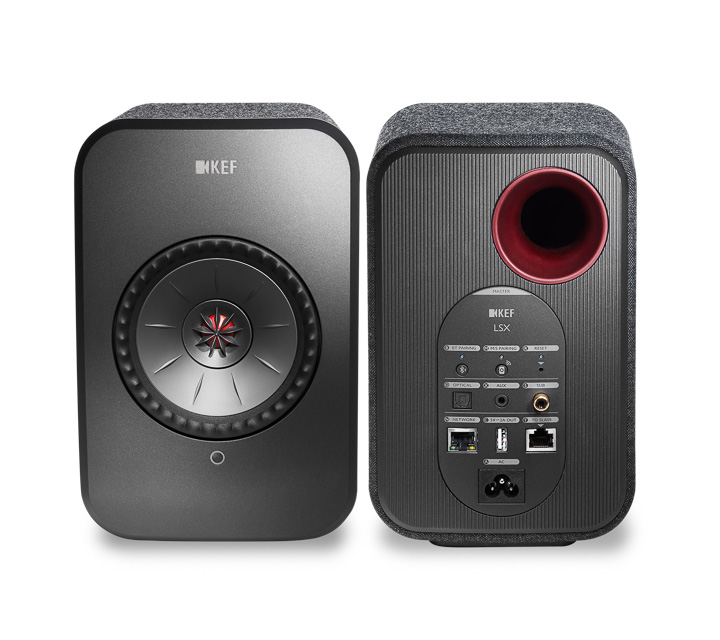 You can’t break from the whole LS50 Wireless aspect of the LSX though, and I don’t think that’s something KEF would necessarily want you to do either. If KEF was keen on breaking that link, it probably wouldn’t have made the LSX look like a scale model of the LS50/LS50 Wireless. It has the same proportions, just smaller. The smaller size means the top-plate control panel of the LS50 Wireless goes away and everything is driven by the app. This is no bad thing, as it’s very ‘Spotidal’ friendly and both quick and easy to set-up. Parameters on the app include whether the speakers are on stands (expected mid-year) or sitting on a shelf, distance from wall (and lip of said shelf), master/slave orientation (no need for gimp masks, just whether the master loudspeaker drives the left or right channel), and increasingly connections. Alongside the more conventional analogue aux minijack, Toslink and increasingly ubiquitous Ethernet connection (one is used to connect master to slave, as well as master to outside world), it can connect to the world through Bluetooth and wireless Ethernet, although Class 2 USB audio and a pair of conventional RCA analogue sockets are lost in the shrinking process. Although the on-board DAC can support up to 24-bit, 192kHz file sizes, the LSX downsamples to 24/96 as that is the limit of the master-to-slave Ethernet connection (run wireless, this drops to 24/48). It has a subwoofer output RCA connector and can even charge your smartphone via USB while you are playing tracks through Bluetooth. In other words, it taps the zeitgeist!

Technically, the shrinking process makes for a smaller Uni-Q drive unit and the loss of the Class A/B amplifier for the tweeter, the LSX going for a complete Class D active amplifier system. Doing away with a Class A/B design means the loudspeaker has less heat-dissipation requirements and that means no heatsinks at the rear; in the process sparks a move from a heavy MDF cabinet to an ABS casing. The active amp system does deliver a healthy 100W to that latest generation Uni-Q drive unit, however.

The LSX relies heavily on its app, or rather ‘apps’: Stream and Control. As the names suggest, one controls basic functionality of the LSX, and the other drives the content, speaking to DLNA servers, aptX Bluetooth, and Spotify Connect like a native, Tidal like a fluent speaker, and is currently learning how to speak Apple AirPlay 2. In an ideal world, KEF would get this down to a single app, as there is some flitting from app to app (fortunately both run concurrently and don’t crash), and there is a little bit of hesitance in its Tidal connection. I’d ideally like it to speak Tidal with the same fluency it speaks to Spotify or a DLNA server, but this is more an occasional hiccup than regular drop-outs.

What’s good about the LSX is its clearly a design that comes down the audiophile pipeline, and not through the mass-market sound-producer development team. People who like the sound of music made this, rather than the sound of people who flit from one industrial design to another throwing drivers in a box. 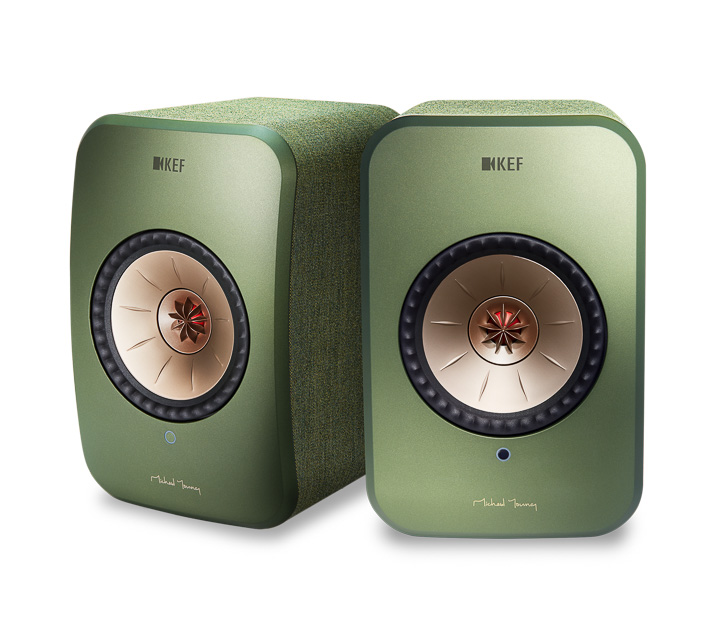 The LSX has big shoes to fill. The LS50 Wireless set new standards in active ‘next-gen’ complete audio systems. Fortunately, the LSX does the same at a new price point. It also has to deal with the kind of music most audiophile systems will never get close to; like ‘Boss’ from Little Simz excellent third album Grey Area[Age 101 Music]. This is hard, spiky MC-driven rap to a distorted back-beat. LSX deal well with the stripped-back music, pushing her overloaded microphone front and centre so you can hear every angry word, and you realise why this 25-year-old English rapper is destined for greatness. Dropping back to a more ambient tip, ‘Polar’ by Icelandic neo-trip-hoppers Vök from their 2017 Figurealbum [Record Records] and the deep synth sounds mix well with the breathy vocals like they did when I used to listen to Portishead on KEF Reference speakers.

Of course, music that is electronically generated is not the complete story, and how a loudspeaker like the LSX copes with orchestral and piano pieces is perhaps more telling. But even here the LSX acquits itself well. Playing piano first [Bill Evans playing ‘Young And Foolish’ from Everybody Digs Bill Evanson Riverside], the LSX separates the sounds of the trio well and doesn’t tangle with that piano sound, even when the key change forces a lot of left hand work. In all these tracks, there is also an important sense of rhythm underpinning the music that the LSX is remarkably good at reproducing. Meanwhile, the DG recording of the Amadeus Quartet playing Beethoven’s ‘Rasumovsky’ quartet (Opus 59/1) is rich and expressive. This might not be the ultimate in spatial reproductions, but the LSX produces a sound of surprising width and depth, and most importantly gets the timbre of the instruments right, especially in the midband. Granted, trying to squeeze all that sound into that small a loudspeaker imposes limits on the sound itself. You will get surprisingly deep bass from the LSX, but if you are intending on playing Mahler’s Eighth at high volumes, you’ll hear where those limits kick in.

This is a fine loudspeaker system, but KEF isn’t going to lie awake at nights worrying about cannibalised Blade sales, or even that the LSX will cut into sales of the LS50 Wireless. Both of those systems deliver a lot more than the LSX ever will, in the two fairly fundamental areas of absolute volume headroom and bass extension. But that is missing the point; the LSX also delivers a lot of what loudspeakers like the LS50 Wireless do so well and does it for those with smaller rooms and smaller bank balances. The mid-range and top-end are pure KEF and the size of the speaker makes it behave almost like a point-source, so its imaging is absolutely top-notch. Forget the glass-half-empty Eeyore types, this is a great loudspeaker for a generation unwilling or unable to devote huge amounts of space to their audio equipment!

The LSX proved a success in the Sircom household too. Often when some large crate containing a pair of huge, ugly loudspeakers rocks up during the day, that evening I can hear the sound of ice forming on my wife’s upper slopes. Instead they got a nod of approval. The nod became a chorus, as my brother-in-law popped round, heard them, and bought a pair. It’s that kind of speaker; despite some audiophile inverted snobbery suggesting only golden ears justify a difference enough to put hand in pocket, the reality is when presented with something so much better than the sound of an Amazon Echo or a Sonos One, real people like what they hear, too. 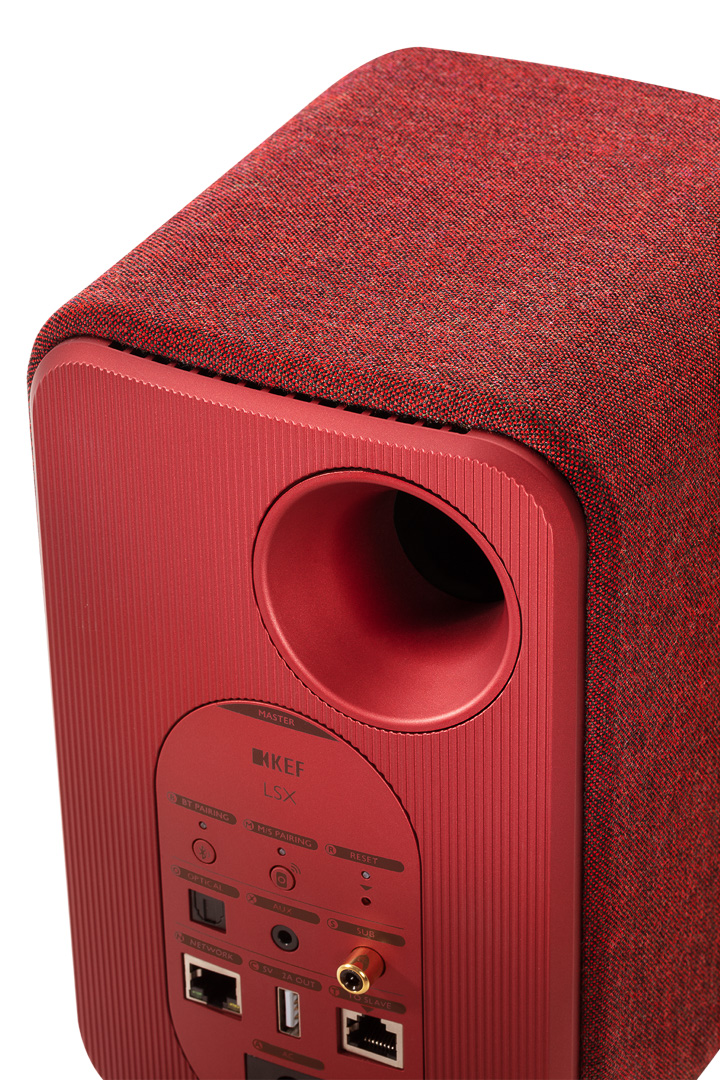 The joy of the KEF LSX is that it’s an Everyman loudspeaker, and it isn’t just designed to be some kind of audiophile-creation machine. People who listen to music through these loudspeakers like what they hear enough to both buy a pair and gain appreciation for those of us who go deeper into sound quality. If I was dumped on a desert island with only a pair of KEF LSX to keep me company, I’d be fine with that… that’s how good they are.