We have a bit of a Hegel problem. The magazine has reviewed almost everything that comes out of the Norwegian design studio, and we really need the company to make something bad so that we can appear to have a modicum of ‘objective balance’. The problem is that Hegel keeps making great products, so either we go rogue and attack a Hegel product undeservedly, or the magazine sounds like it is a bit of a locked groove.

The thing is, Hegel is in something of a locked groove, too… but in a good way. The line-up is just going through a series of changes; alongside the H590 flagship comes a slew of new models replacing old. This is in part trickling down technology from that new top player, and in part re-imagining the amplifier line to reflect life in the 2020s. Just a USB DAC and some line inputs isn’t enough anymore; the amp needs to support network replay, whether from a local music server or from streamed music from a variety of online sources.

Fortunately for Hegel, its recent development means making very good products can rely on combining the right modules from pre-existing designs. In the H120’s case, that is pretty much exactly what Hegel has done. The amplifier is basically the analogue side of the company’s Röst Integrated Network Amplifier with the digital gubbins of the H190 integrated amplifier. The H120 replaces the Röst, because the DAC engine of the H190 gives it greater compatibility with today’s services. It speaks UPnP/DLNA, AirPlay Connect, and SpotifyConnect out of the box, as well as custom-install IP functions like Control4. As the amp evolves, a Roon Ready upgrade will be made available. 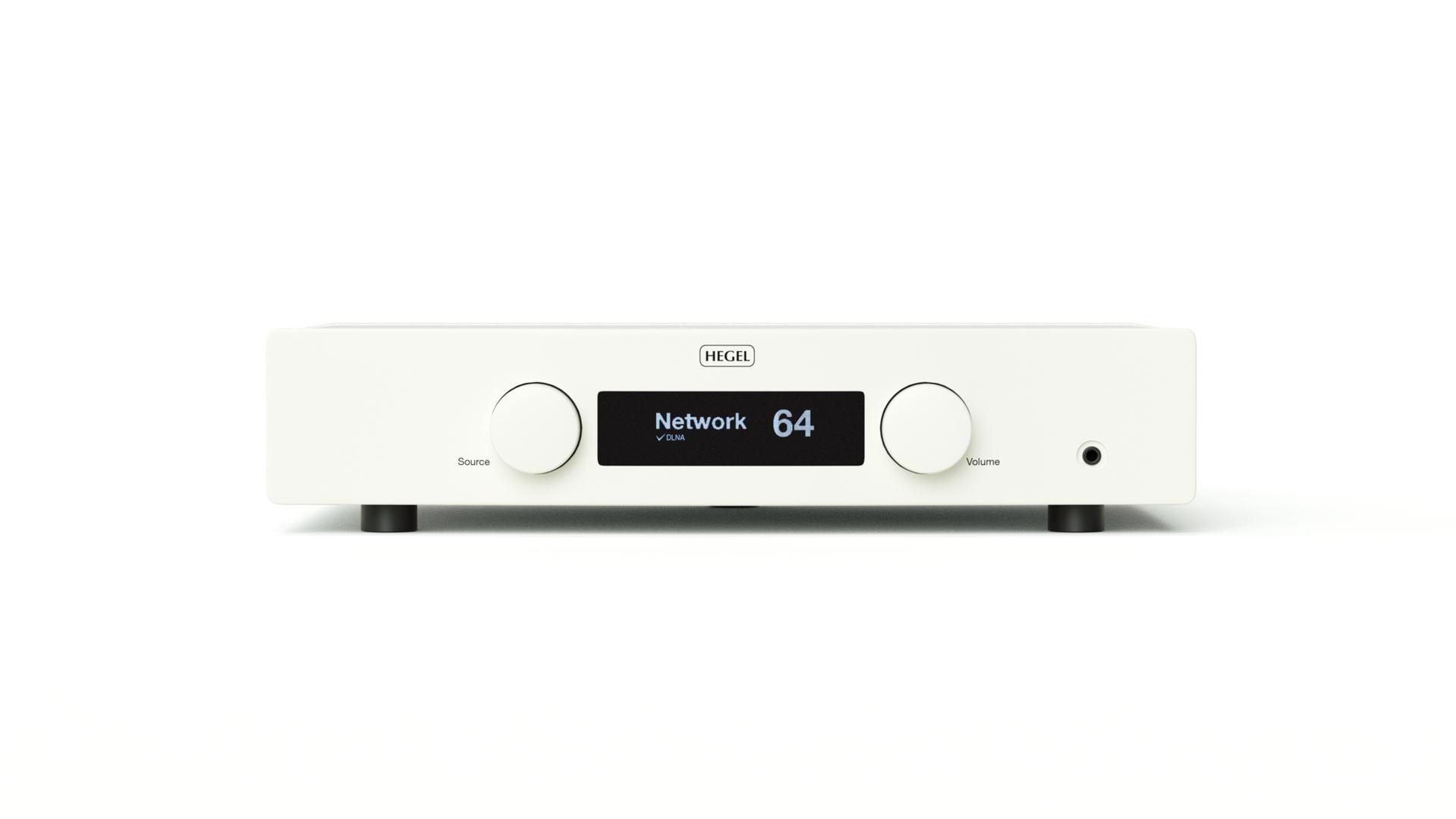 Where most companies prefer to use TLAs (three-letter acronyms), Hegel prefers to go with CleverNames to describe its subsystems, and the 75 Watt per channel H120 bristles with technologies like OrganicSound, SoundEngine 2, DualAmp, DualPower, LineDriver, SyncroDAC and AdaptiveAutofocus (I may have snuck an extra one in for good measure). These pithy portmanteaus do aim to describe some of Hegel’s long-standing design criteria. Specifically in this case ‘OrganicSound’ denotes an iterative listening process that requires careful voicing of the amplifier against a known reference of acoustic instruments and vocalists, which relies on ‘SoundEngine 2’; the enhanced form of Hegel’s localised feed-forward amplifier circuit. Meanwhile, ‘DualAmp’ refers to a process that separates out the voltage and current gain stages and the related ‘DualPower’ provides specific power supply feeds for those separated parts of the amplifier circuit. On the digital side, ‘LineDriver’ technology is a form of high-frequency filtration, while  ‘SynchroDAC’ (synchronised – as opposed to asynchronous – upsampling) that goes with the company’s similarly synchronous USB input technology. In OtherWords, the H120 has a good spread of Hegel’s sophisticated analogue and digital design modules.

Merging the H190 and the Röst in a small chassis does make for some fairly tight rear-panel real estate. On the analogue side, the amp has a single RCA line and single XLR input pair, with an additional RCA input/output for home theatre or for those who remember the tape monitor. The digital side brings a coaxial, three optical, a USB, and Ethernet inputs. Toward the centre of the rear panel are a pair of good speaker terminals. The front panel is typical Hegel fare, with a control knob on the left, a volume on the right, a display between the two, a headphone socket, and a power button under the centre of the front panel. The central display switched from blue alphanumeric LEDs to a fluro display with the birth of the Röst, and that remains unchanged here. In fact, if you swapped out the Röst for the H120 surrpetitiously, no one would notice the difference. Similarly, the remote handset retains the weighty metal minimalist appeal. There are some omissions here; there is no wireless connectivity (Wi-Fi or Bluetooth, any wireless tablet control relies on an upstrem router) and balance isn’t on the menu either.

In a very real way, there isn’t much to write about here, save for marrying up the sound quality of Hegel’s Röst with the performance of the brand’s mid-level on-board DACs. That means a performance that is bright, breezy, alive and delivers just the right amount of leading-edge information without the sound pitching too far forward. Hegel’s other signature sound is that of bass grip, controlling the bottom end of a loudspeaker with muscularity and precision. Although this means small loudspeaker drive units don’t have unfettered freedom to flop around, this grip and tautness often gives better, deeper bass. It also presents a ‘giant-killler’ nature, where the H120 can be used with the sort of loudspeakers never normally associated with amps in its price band.

Similarly, the digital stage harks back to many of the detailed and open performance criteria observed in other recent Hegel amps; the H120 lacks the absolute precision of the H390 and H590 of course (better DAC, way better clocking mechanism), but has a lot of clarity and depth to the sound. It’s a fine match to the performance of the amp, too; as it has the same properties of being bright (but not too bright), detailed, just the right side of forward, and with excellent bass.

Even the headphone socket has more than its fair share of ‘good’. While not a dedicated amp, there are several noise-reducing tweaks performed to this tap from the speakers. It’s detailed, dynamic, and – yet again – gives really good bass. OK, so personal audio experts aren’t likely to pass up something like a Chord Hugo TT for the H120 and certainly would find better definition and range from a top-end dedicated headphone amp, but the Hegel stage acquits itself more than admirably and is no mere afterthought, which is a welcome addition.

I’ve said it before about Hegel amps, but it’s worth saying again; the H120’s gives the music and the loudspeakers what they want. And it does it better than many by doing less, rather than more. It doesn’t buff up the sound or soften the blow; it plays music honestly and lets the loudspeakers do their job unconstrained by the electronics. Yes, of course there are amplifiers that do that job better (many of them come from the same stable), but few do so with the balance of price and performance the H120 delivers. Better costs more and cheaper cuts corners.

So, we’re scratching our collective heads to find something to criticise. OK, it’s not a H390 or a H590, but that’s like criticising a BMW 3-Series for not being a BMW 7-Series. And yes, if you aren’t a fan of Hegel’s clean, upfront, leading-edge focussed sound, the H120 is probably not the amplifier for you, but that’s more an observation than a criticism. I guess the closest to a criticism is the product design doesn’t deviate from Hegel’s well-trodden path of two knobs, a central display and a power button under the front panel. That’s it! Doubtless the trolls will find something they can object to, but let’s face it, Norwegians have been dealing with trolls for centuries!

There’s a simple economics lesson here. People often want it all; the most up-to-date digital platform, with the best possible sound quality, designed and built in the West, and all at a good price. In reality, the best products can only pick any three out of four of these elements, while many of the middling products out there can only muster one or two of these factors. There is no pejorative at play here; pick the three you are most comfortable with, and if you picked the first, second, and fourth criteria, the Hegel is one of the front-runners to go for. 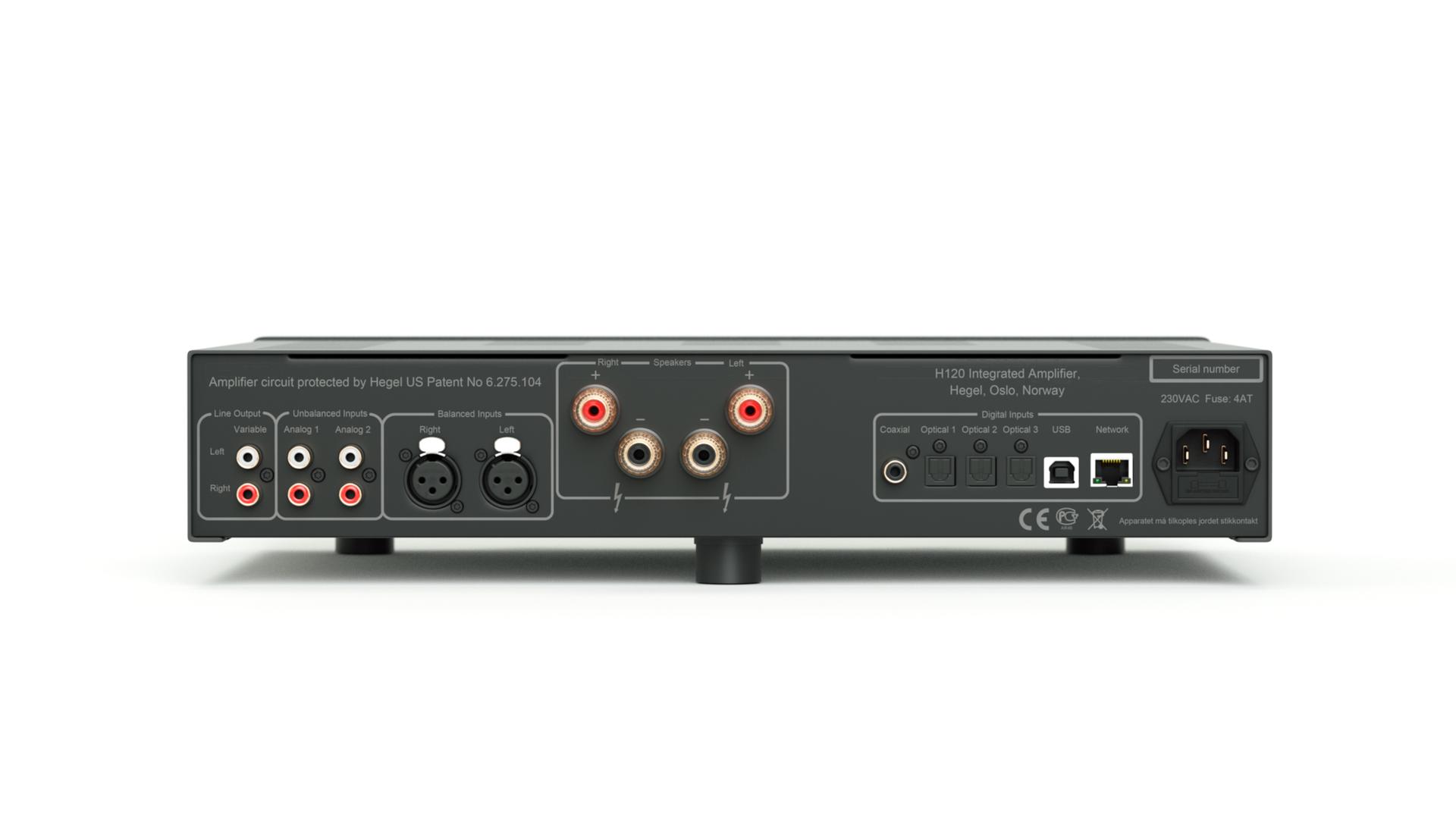 Replacing Röst was always going to be an interesting act for Hegel. It broke new ground for the company, and with many ground-breaking products, that meant it didn’t sell quite as well as it deserved to. The H120 is different, as it retains everything good the Röst brought to the party and also continues and extends Hegel’s ‘giant-killer’ range of amps. This is the kind of amplifier that works well in context and can support some surprisingly high-end speakers. While that sounds like the stuff of absurd review kit-bashing, what it means in reality is you can build and upgrade a system around the H120 far further than usual at this price. You don’t have to use it with esoteric audio equipment, but it won’t mask their effects if you do. In short, it’s an all-round goody.

Spotify Connect for all Lindemann streamers