Way back in the day when Exposure were the only real competitor that Naim had in the UK, both companies made a lot of half width black boxes. They were all ugly and, in the case of Naim, strangely connected little things that sounded very entertaining while not appearing to be too bothered about neutrality and bandwidth. Since that time both brands have changed ownership but Exposure has retained its manufacturing, test, and assembly facilities in West Sussex… not far from its original base near Brighton.

Last year Exposure returned to the half-width scale for its XM range, headed up by the XM5 integrated amp but also containing the XM7 preamp and XM9 monoblock power amps, XM3 phono stage, and XM HP headphone amp. Clearly there’s an appetite for the more petite in the market for separates even at this relatively high price per cubic centimetre. Rega, for example, makes the Brio for £698 with a phono stage but no DAC while Cyrus has its One with phono stage and Bluetooth but again no digital inputs at £699, and NAD, Marantz, and Rotel offer amps with both facilities at both higher and lower price points but in slightly bigger boxes.

The £1,236 XM5 claims to be an amplifier for all seasons thanks to the inclusion of an onboard digital to analogue converter and a phono stage, which in the age of the vinyl revival is probably a good idea. It’s for moving magnet cartridges only and is marked as aux/phono suggesting that with a bit of under lid fiddling this input can be a regular line type, but apparently that is not the case; perhaps the word ‘aux’ is provided for markets that don’t want a phono stage! Otherwise there is a single line input and an AV input. The DAC has optical and coaxial inputs for S/PDIF connections to the TV or a CD player, albeit the coax ones are both on BNC sockets, which is a proper 75 Ohm connection, but not one you’ll find on many affordable sources. I presume that the USB input connects to an XMOS receiver chip as the amp comes with Windows drivers for that protocol; Mac users can just plug and play.

The XM5 has a linear power supply based on a 200VA toroidal transformer and the spec claims that, “Only high quality resistors and capacitors are used in the signal path”. The output devices are Toshiba bipolar transistors, which doesn’t mean that they have a split personality. The casework is not as fancy as some, but pretty tidy with a brushed aluminium front panel that sports buttons for scrolling through the inputs and a motorised volume pot. The remote handset is very much off the shelf and fully buttoned up, but volume is picked out in green which helps; it also has individual input selectors. Be careful with the AV input; it bypasses the volume control and goes straight to the power amp, so can only be used with sources that have their own volume adjustment, such as AV processors.

It’s clear that Exposure has tried to make as mass-market an amplifier as it can with the XM5, but in leaving out the most popular connection system used by the great unwashed they may have missed a trick. Bluetooth, for all its limitations, is the de factoconnection method for the smartphone generation, which is why you see it in amps from bigger brands. But Exposure has been in the amp business for some time and by omitting an RF receiver in the vicinity of the audio signal, many would argue better sound quality can be achieved.

The back panel of the XM5 incorporates BFA style loudspeaker connections that require a 4mm banana plug on your speaker cables – a bit like Naim amps, but without the preference for high impedance cables. I connected Townshend F1 Fractal cables to the amp and left the PMC Fact.8 speakers on the other end. This, however, didn’t prove a particularly happy match: I suspect that the power amp section of the Exposure was not really up to the task of driving this speaker with its lower than average sensitivity and highly revealing nature. The sound the two produced, while relaxed, was lazy as a result of limited dynamics and sluggish bass, but there was plenty of detail especially through the treble. This was with the Melco N1A server connected directly to the USB input so I switched to external D/A conversion courtesy of the CAD 1543 MkII in the hope that this would help matters. It did, in terms of increased vitality, but the timing remained so-so and the treble became more prominent, even though the CAD is the most relaxed of converters. 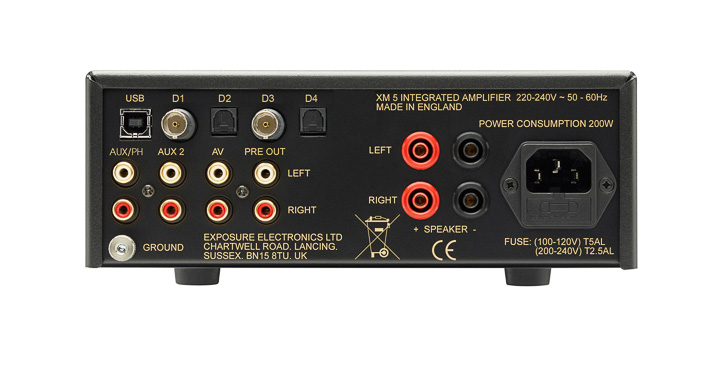 I switched to a more affordable PMC in the compact form of the twenty5.21 standmount in the hope that its smooth but revealing character would be a better match. These opened up the midrange quite nicely, with voice benefiting in particular, but they still seemed a little underpowered and prone to forwardness in the treble. That said when I put on Talking Heads’ ‘Crosseyed and Painless’ [Remain in Light, Sire] it was difficult to sit still so strong was the power of the funk. I tried a Rega Brio with these speakers and got a less refined and clean result, but one that had more vivacity, the Exposure having a calmer and larger scale presentation. At this point it seemed that another speaker was going to be necessary so I brought in the substantial Q-Acoustics Concept 500 floorstanders that have been giving excellent results with a number of amps. This proved a much more auspicious pairing with the XM5, which provided good scale, plenty of energy, and decent levels of detail resolution. Radiohead’s ‘Decks Dark’ [A Moon Shaped Pool,XL] was delivered with power and scale aplenty, the bass having good weight, and the spatial effects of the production coming through well, if not to the full extent available. The more challenging nature of Beethoven’s 7th was not as well handled, however; timing cues needed to be more obvious and the dynamics that make this piece so engaging were not fully realised.

I decided to try the phono stage and went through the faff of installing a Goldring 1042 moving magnet in a Rega RP8 for the purpose; happily it was worth the effort when the stylus hit the groove on Leo Kottke’s Great Big Boy[Private Music]. I don’t usually use MMs, but when they are as good as this Goldring there’s a lot to enjoy; dense fine detail produces a strong sense of presence that almost puts the musician in the room. Timing is better thanks to the source and the bass drum kick has harmonics that fill up the soundstage so well that it takes a while to notice how good the voice is. MCs might do highs better but not many have midrange clarity of this calibre – clarity that makes lyrics that much easier to understand. The acid wit of Patricia Barber’s vocls in ‘Company’ [Modern Cool, Premonition] is placed front and centre until the drum and bass take over and deliver muscular backing for the trumpet break. Vinyl was proving to be rather addictive through the XM5 however, so I switched back to the USB input with the same track albeit in a slightly different Mobile Fidelity Original Masters form where the balance is heavier and smoother: this was just as powerful but lacked the energy of the vinyl.

There are of course other digital inputs available and by running Ethernet from the server to an AURALiC ARIES I was able to take advantage of the coax option. This provided a distinctly more musical and dynamically superior result to USB; it’s an interesting comparison though and with some material the difference is greater than others. Herbie Hancock’s ‘Chameleon’ [Head Hunters, Columbia] for instance sounded a bit more funky and fluid via coax, the USB option seeming a bit dry and stilted. Switching to the medieval grooves of La Folia[Atrium Musicae De Madrid, Gregorio Paniagua, Harmonia Mundi], the coax connection delivered considerably more layering of depth and graduation of micro dynamics, making it a clear winner.

The Exposure XM5 is a neat and well-equipped integrated amplifier that does nearly everything the contemporary music lover might desire. Sound quality is as ever highly dependent on finding a good match on the loudspeaker front, and while the XM5 doesn’t have vast reserves of power, meaning you have to be a little more careful than usual, get the speaker selection bit right and this Exposure should provide many moons of listening pleasure.