English Electric was once a titan of 20th century British engineering, building trains, steam turbines, guided missiles and even mainframe computers. It was formed out of several companies after the first world war and went on to build landmark aircraft including the Canberra or B-57 and Lighting jets, it was merged with GEC in 1968 with the combined operation employing a quarter of a million people. Then like many great marques from that era, it disappeared in the industrial decline of the 1970s. Now, the name is back once more atop the cast aluminium casework of Chord Company’s first electronics product, the English Electric 8Switch. It’s an unusual choice of brand given the prominence of Chord Company in the marketplace but apparently the move is intended to avoid any confusion with Chord Electronics, and it’s good to see a classic brand revived in its country of origin. 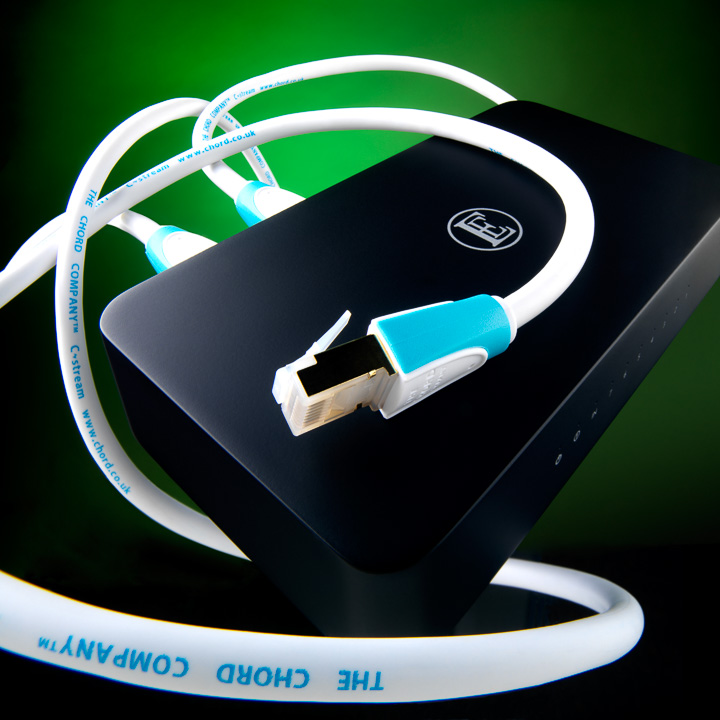 A network switch might not seem a terribly exciting product with which to launch a new brand, but if you have a streaming system it will be more apparent why this is a good idea. Until two years ago, there were – to my knowledge – no network switches designed to serve the needs of the audio connoisseur. This changed when the Korean company SOtM announced the sNH-10G in 2018, and the end of 2019 and start of 2020 saw the audiophile network switch blossom. The alternative preferred by many is to use the Ethernet output on an audiophile server such as an Innuos or Melco; these products have single in and outputs that allow a network streamer to see the local area (LAN) and wide area (WAN) networks and thus access music from both music stored on the server and streaming services from the likes of Qobuz, Tidal and Spotify. But in most circumstances, you need a switch as well because few of us can dedicate the incoming broadband feed to one audio component. There are extra ports on a broadband router for a start and if you want to achieve a degree of isolation for the streaming system it helps to have another switch there as well. There are also quite a lot of servers out there that don’t have an ethernet output.

In my system, a Cisco switch connects the PC to the servers on the audio network so that I can manage the music library. It also connects an Apple Airport Express that provides the Wi-Fi needed to control the streamer and finally it connects the server to the network. The server being hooked up to the streamer as described above. In the past I had a Netgear switch that was upgraded with the aid of a Longdog Audio power supply, but the Cisco switch was highly recommended and eliminated some boxes, which is always a bonus for those of us who never have enough space for everything.

But why would you want an audio grade network switch when a computer peripheral can do the job for so much less? This boils down to the requirements of computing and audio, the former just needs the appropriate data to come down the line at approximately the right time where it can be reassembled into a sufficiently coherent form to know what it needs to know. In audio things aren’t so simple, the main issue is electrical noise, if there’s noise along with the data it makes an audible difference to the result. As a result, pretty well all of the advances made in streaming have been related to minimising noise. When I reviewed and was blown away by the Innuos Zenith SE server it was the reduction in the noise floor that made it so impressive. Data switches are not that different to noise generators when it comes to audio, they run at high speed, have basic switched mode power supplies and emit a lot of interference along with the data. Anything that can be done to isolate from or filter out this noise will be beneficial to the end result, producing a more relaxed and thus less digital sound in the process.

The English Electric 8Switch is an eight port gigabit switch in a rather nice machined aluminium enclosure that has pinpoint LEDs in the front panel to show which ports are in use, a marked difference to the constantly flashing port lights found on regular switches. It is driven by a customised temperature optimised clock (TCXO) which is said to be accurate to 0.1ppm. The power supply and clock generation circuits each have two isolation circuits and an EMI absorber is included to help keep electromagnetic noise at bay. Power is provided by a medical grade SMPS plug top supply with its own LED and a rather short lead, it’s just about long enough for my requirements at 1 metre but some might need a mains extension. I like the finish and build of the 8Switch with its matte black powder coating and appreciate that it runs cool, consumption without load is less than one watt. It’s supplied with a 0.75 metre run of Chord Company C-Stream streaming cable which did prove a little short for my system, but I managed to give it a go.

Initial listening was without the C-Stream and direct from the switch to an AURALiC ARIES G1. Going from a Cisco Catalyst 2960 S1 to the 8Switch resulted in a considerable increase in high-frequency detail and better timing, the former undoubtedly begetting the latter thanks to better resolution of leading edges. Cymbals and treble harmonics clearly benefited, and the sound became more vibrant and fresher. The degree to which the upper end of the spectrum was cleaned up was quite a revelation, making the tone of voices and instruments far more appealing. It also opened up the soundstage really nicely, increasing its scale and depth.

Taking the signal back to its normal route via the Innuos server, where the only data that (should be) passing through the network switch are commands from the control app, I didn’t expect much of a change, but I was wrong. Here the change wasn’t as great as the direct connection but it was no less palpable in its own way, this time it was timing precision that was markedly improved, so much so that the air guitar came out, a first for the track I was playing and a classic Chord Company effect. Things were more enjoyable than expected presumably because the switch was sending less noise to the server and thus signal to noise had improved. Next up I used Qobuz to see what benefit the 8Switch would have with a music signal that had travelled through many miles of glass fibre and copper wire prior to getting to the system. 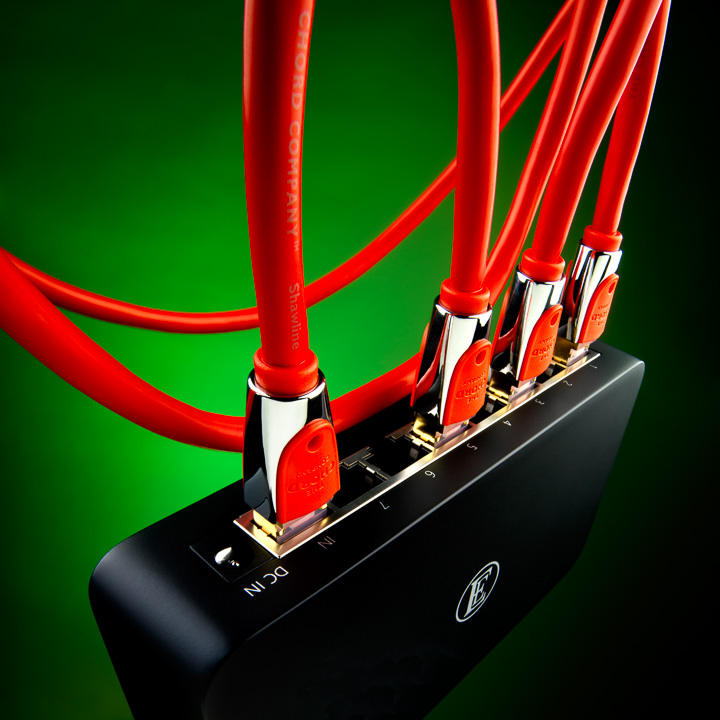 Here the result was a combination of the benefits heard with the two approaches tried above, with tunefulness especially in the bass much increased and vocal projection being distinctly stronger. I used the track that the Chord Company had used to demonstrate the 8Switch with at Bristol, Patti Smith’s version of ‘Boy in the Bubble’ [Twelve, Columbia]; not exactly polished at the best of times yet becomes a lot cleaner and stronger of groove when this switch is used. It provoked an LP12 like tunefulness upgrade that I’ve not previously encountered in streaming audio. In that instance the signal was being partly filtered by the Innuos, taking that element out of the chain and using the C-Stream cable between switch and streamer playing the original Paul Simon ‘Boy in the Bubble’ [Graceland, Warner Bros] brought out a lot more fine detail. Reverb being obviously easier to appreciate alongside the subtleties of the groove. The backing vocals were now clear when they were previously masked, and the texture of the distinctive bass line was more nuanced and far less coarse. The final contrast I made was between the English Electric and a Netgear GS108 with a Longdog Audio linear power supply, this proved to be the closest match of the lot but with an orchestral piece the 8Switch delivered distinctly sweeter highs and stronger melodic drive, this time invoking an air baton out of thin, er, air.

I think it’s safe to say that the 8Switch does the English Electric brand credit, it’s not quite a Lightning but it is an important contribution to audio streaming fidelity and that in its own small way will enhance the lives of music lovers far and wide. The fact that it does so in an attractive compact box that doesn’t threaten polar bears makes it all the more appealing. 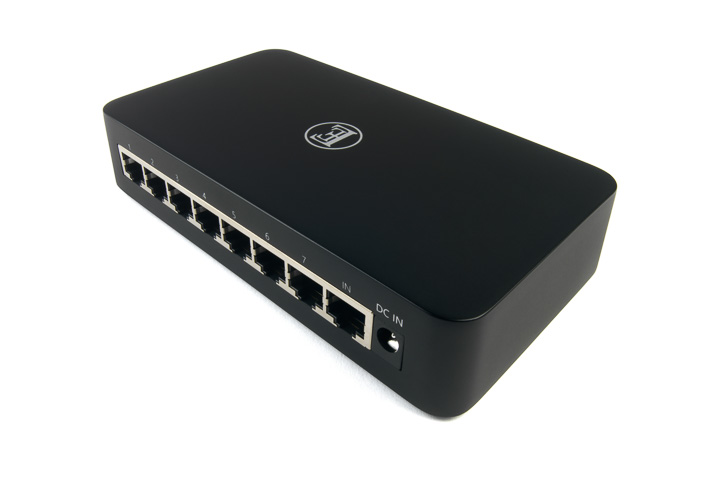