While there are a lot of new audio products out there, few challenge the accepted norms of audio design quite like the Davone Meander. Loudspeakers doubly so – even clever, leading-edge designs – are typically squared-off rectangular or rounded boat-backed boxes. The Danish Davone company is a rare exception to the rule and the Meander shows why.

Those with good memories might recall an early Davone product; the Rithm loudspeaker that we reviewed way back in issue 76. This was a really clever passive floorstanding loudspeaker that looked – from the side at least – a bit like the original Star Trek badge worn by Captain Kirk. The company has retained a love of curved wood and contrasting drivers hidden behind a black cloth, but the intervening dozen or so years has changed everything. In fairness, Davone still makes conventional active and passive loudspeakers, but in that range, the Meander stands alone. 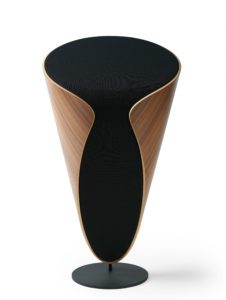 Let’s start with the obvious, the Davone Meander’s industrial design. There are a few inverted conical shapes in audio, but none quite so sweeping. In asking around, this has been described as an ‘ice cream cone’, a ‘tornado’ and – said without pretence, and in fairness with some accuracy – ‘temaki sushi’. A roll of walnut or oak is wrapped around the central core of amps and drive units, and this sits on a pedestal. It has that timeless Scandinavian cool to it, a bit like Arne Jacobsen’s mid-20th Century ‘Series 7’, only folded in on itself.

The Meander is an active all-in-one wireless loudspeaker. It couldn’t be simpler to use. Plug it in, wait five minutes, point the Google Home App at something called ‘SM450’, wait a few more minutes, tell it what room it’s in, point it at your wireless network and you are done. It talks Google Chromecast and Apple Airplay 2 like a native, is extremely happy living in Spotify Connect land and – in the unlikely event this fails to rattle your cage – the Meander will Bluetooth for fun and profit. If none of these words make sense to you, find a few like-minded friends, join hands, and try to contact the 21st Century.