The Ceramic Disc Isolation Feet made by Franc Audio Accessories are all about energy control. Energy control is a large part of reproducing music with audio equipment; every element of a circuit, chassis, cone, or cabinet has a resonant frequency, a pitch at which it will vibrate to a greater extent than others. Designers use various methods to minimise energy control because vibration in the hardware introduces distortion to the sound waves. For instance, you can put virtually anything under a turntable, which will probably change the sound quality; this is easy to understand because a turntable stylus is trying to measure tiny vibrations in the vinyl groove. Vibration is harder to get your head around because it also affects capacitors, resistors, and chips. It seems that no matter the amount of mass or the stiffness of casework, changing the support changes the sound.

Franc Audio Accessories is the brainchild of Paweł Skulimowski, a Polish mechanical engineer and amateur drummer who has been making the range of isolation products for over a decade. He makes furniture, bases, and feet, all exceptionally professional in build and finish. According to the website, “He has discovered a technique of joining really hard and stiff ceramic materials together with light aluminium alloy and elastic plastics. All parts are precisely CNC machined to give great quality and consistency.”

Jumping in with two feet

There are two types of Ceramic Disc Isolator feet in the Franc Audio Accessories catalogue; two models for electronics/turntables and two for loudspeakers, while the latter also sit under equipment racks. The Ceramic Disc TH is the least expensive, sold in sets of three or four and stands just over 30mm high. It has a hole in the top that would act as a spike receptor, but the top plate is 44mm in diameter, so it accepts most feet. The base is loose but does not come away, and there is proprietary with an unspecified ceramic interface.

The Franc Audio Accessories Ceramic Disc Classic stands 45mm high and is 68mm in diameter at its base. The top cap is covered in smooth plastic and is 46mm in diameter. Here the top cap is free-floating and can be removed to reveal a ceramic ball in the middle of a carbon fibre spider. The idea is that the base of the equipment rests on the foot directly, bypassing the equipment’s own feet. This foot is available in packs of three as standard, other quantities on request. 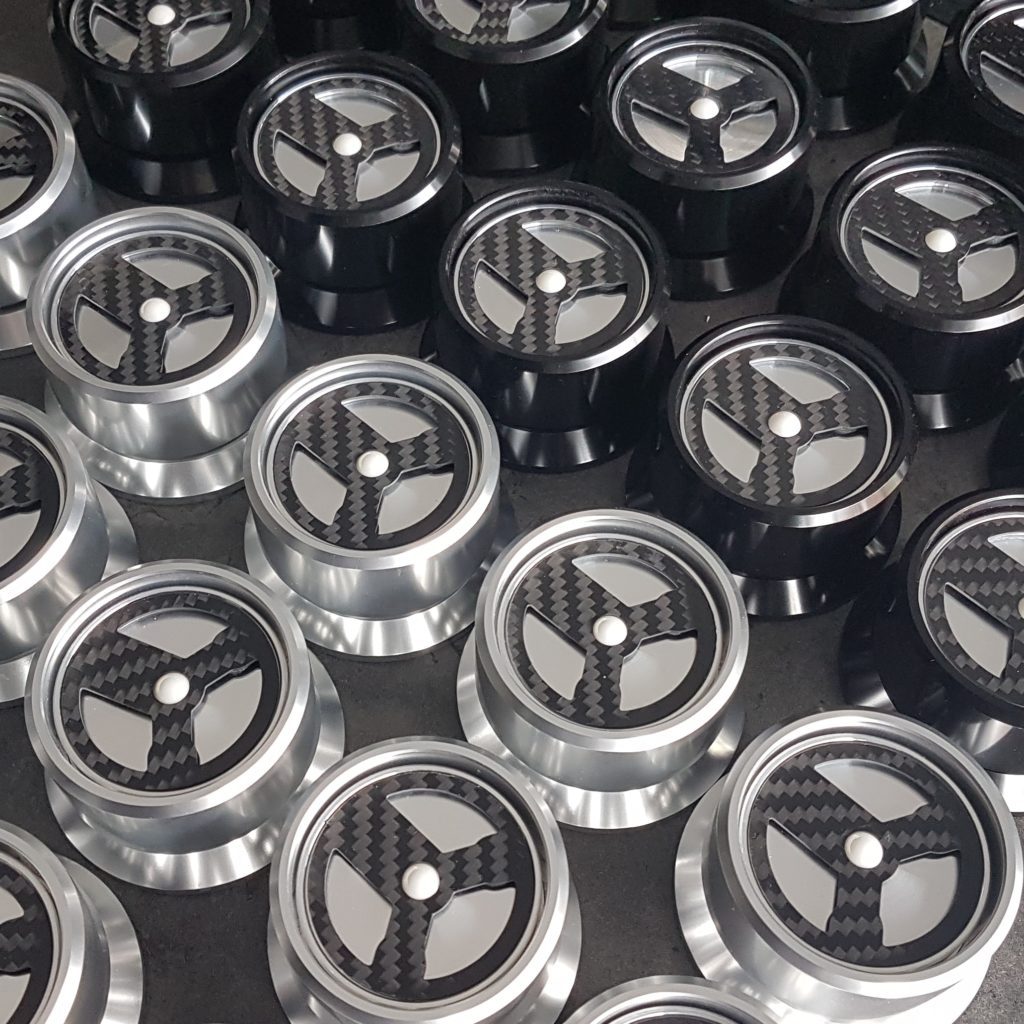 There are two loudspeaker feet in the Franc Audio Accessories Ceramic Disc range: Slim and Fat, with the smaller model coming in at 25mm high by 59mm in diameter at its largest. These contain three ceramic balls within them and, like the TH feet, have a central spike locating point on top and a foam rubber skin on the base. They feel more damped than the equipment feet, but there is a bit of movement in the top cap. The Fat Foot lives up to its name by standing 45mm high with a similar 68mm base to the Classic. Again, it has a central spike locator and rubber-covered base.

We tried the Franc Audio Accessories Ceramic Disc feet under several components and loudspeakers. First up were Eggleston Emma Evolution loudspeakers; these weigh just over 31kg and stand 109cm tall on their cone feet. However, it’s worth noting that most pieces were already on a well-isolated Townshend Seismic Stand, which should keep a fair amount of energy at bay.

Putting the Slim feet under them made the bass sound fuller, increased the scale of the image thanks to apparent superior dispersion and added depth to the image. It was an enlivening, opening-up effect that seemed entirely beneficial. It also took the edginess from the presentation, as if the speaker had become more refined.

Switching from Slim to Fat feet brought a calmness to a very appealing production, the sound becoming relaxed and yet remaining precise as if reducing distortion. In another piece of music, the reverb became more accurate, and there was more space between notes, a string quartet sounding less frenetic and more cohesive.

Putting three of the Franc Audio Accessories Ceramic Disc TH feet under an iFi Pro iDSD DAC had a similar effect, relaxing the sound and bringing out nuances in the music. That was with the DAC on the Seismic Stand; starting with it on something more mundane brought the same effect but to a greater degree, with decay, scale, and focus all enhanced. A solo piano piece lost a lot of its ‘clang’ and replaced it with better timing, making the performance more engaging. The three Franc Audio Accessories Ceramic Disc Classic feet did a similar job but revealed more low-level detail, dynamics, scale and presence in the recording.

I did the same thing with a Rega Planar 10 turntable on the Seismic rack, which brought even greater rewards, the Franc Audio Accessories Ceramic Disc TH feet relaxing the sound significantly by taking away edginess and softening the presentation without undermining detail. Voice was very well served here with a perceived increase in nuance, dynamic range and dynamic contrast. A sense of stunning three-dimensionality hit me, making the imaging tactile and adding weight and substance to the bass. Encouraged by this, I tried the Franc Audio Accessories Ceramic Disc Classic feet under this three-legged turntable. Van Morrison’s Astral Weeks [Warner Bros] retained its crude character but projected into the room much better with far more apparent separation between instruments and voices.

I tried the Slim and Fat Franc Audio Accessories feet under a pair of PMC twenty5.26i speakers, which have a degree of built-in isolation. The result was the same, with a calming presentation. This presentation allowed more of the tonal radiance from the piano while enhancing the sense of timing in uncertain terms. I particularly enjoyed how they separated backing vocals from the lead on one track, even though the two were in harmony.

Dropping the Franc Audio Accessories Fat feet under the same speakers did the same again. They enhanced decay, scale and depth of image before making it clear that there was rather more drama and feeling in the piece than is usually apparent. It became very involving, which doesn’t often happen with Haydn quartets in my experience.

The Franc Audio Accessories Ceramic Disc isolation feet work and work very well. They are well built and finished to a high standard. If you want a better idea of what your system is capable of and what your music sounds like, I suggest you give them a spin.