If Davone’s clever loudspeaker has a distinct ‘Scandi’ appeal in its looks, its sonic performance is similarly angled. The assumption is the speaker is going to sit in a relatively reflective modern living room, not some overdamped, wannabe studio man-cave. High frequencies in particular rely on ceiling rear and side-wall reflection; while I think this is an intrinsically better assumption than thinking reflections are a bad thing and ending up with every room decorated in the last 50 years is too bright, if you have a heavily carpeted room, this might soak up some of its HF and midrange.

Davone recommends people perform a small amount of pre-placement listening, suggesting a ‘sinewave 100Hz’ file on Spotify to determine standing wave interaction and then placing the Meander in the corner of a room to determine the impact of room gain. When you have placed the Meander in the best position to limit these problems, there’s a room correction app, but Davone (rightly) recommend using as fine tuning; think of this as a Band-Aid, not battlefield surgery. Davone also provides automatic OTA (over-the-air) firmware updates, but you’ll probably only notice when the Meander goes quiet for a while. Of course, if it is doing an update, don’t unplug the Meander.

Room correction is deceptively simple and effective. After launching the app, let it ‘find’ the Davone, which takes a matter of seconds. You then press the room correction button on the app, sit and enjoy a few seconds of white noise, while your phone listens to the same through its microphone. It then applies a frequency response curve that it thinks best fits with your room… and you’re done. If you don’t find the result to your taste, you can tailor it by running through the tone controls on the same app. My trawl through the room correction options yielded a near-perfect tonal balance in room, but this is contingent upon the quality of the smartphone’s microphone. 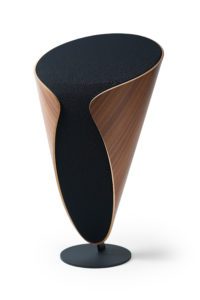 Placement is easier than traditional loudspeakers because there’s just the one Meander per room. While in most cases you need to make a compromise in terms of placement relative to stereo sound (for example, the best position for bass is not the best position for stereo imagery), in the Meander, such compromises are not needed; you place the speakers in the best space relative to the room and let the sound happen. OK, if you want wide and deep stereo, the Meander probably won’t be your first choice (although it’s better than you might expect). But on the other hand, if you want something that puts a smile on your face whenever you listen to music, this is the thing.

The Meander is the absolute opposite to the ‘po-faced audiophile’, where music is secondary to the sound it makes or the kit used to make that sound. While the strong design elements are a talking point, the Meander drives you to listen to music; not as some cerebral experience, but music as the accompaniment to your life. Although I could effortlessly stream Tidal through the Meander, I found myself drawn more to Spotify Connect, just because of the wider range of music and podcasts on tap. While I couldn’t stomach more than five seconds of Joe Rogan without attacking inanimate objects with power tools in a rage, switching over to something like Athletico Mince on Apple Podcasts is a surreal joy. The Meander is great at just making a fun sound and especially a loud and fun sound; it’s the kind of thing you want to have around after a difficult week, belting out ‘reset button’ songs as you mock-karaoke yourself back to some semblance of sanity.

That being said, it’s not just a musical pressure wash, in fact, if anything it maxes out on refinement, which makes the sound all the more alluring. It’s at once powerful enough and yet graceful enough to be the ‘always on’ product that just sits there making music day in, day out.

Those of us who have found working from home to be one of the most significant effects of long-covid, the Meander will get some solid use. It’s not belittling the Meander to say it’s the device that continues a long tradition beginning with radios and came into its own with high-performance smart speakers like the Naim Audio Muso Qb 2.

Davone’s Meander is a fuss-free musical friend, possessed of good bass and rhythm, a surprisingly clear midrange. Often, all in one systems that make a good overall sound do so at the expense of midrange clarity and vocal articulation and projection… but not here; while it might not have that near magical vocal clarity of something like an electrostatic loudspeaker (or even a loudspeaker like the LS3/5a which was designed for the task), it’s still excellent with vocals.