A few years back I visited Canor in Slovakia, their facility in Prešov is pretty impressive, modern and well organised, and as we looked round it became clear that a number of well know British companies were equally impressed because they were using Canor as an OEM supplier. Equally remarkable was the digital tube testing equipment that they had developed. Then, as now, Canor build some of its electronics using vacuum tubes, and measuring these devices for pair-matching and grading purposes is a slow process using analogue measurement techniques. At the time of my visit (2013) there were two amplifiers in the Canor (formerly Edgar) range now there are three of which the AI 1.20 is the biggest. Canor obviously doesn’t go for a high turnover of products but refine what it has for sound quality and reliability. It’s a slightly old-fashioned model but one that is highly beneficial for end users.

This is not a ‘glass’ powered amplifier but it takes its cues from that technology by running in Class A at all times, hence the substantial heat sinking that flank what is quite a substantial near 30kg beast for an integrated design. The AI 1.20 offers 50 Watts per channel into four Ohms, the eight Ohm figure that most manufacturers quote is a more modest 30W. But pure Class A amps are rarely power houses in terms of output figures, the amount of heat dissipation they need is one limiting factor but the fact that they produce a bigger, more powerful sound than the output suggests is probably more significant. Like their valve powered cousins they require more sensitive loudspeakers to achieve this but (unlike them) solid state Class A designs tend to have a more even tonal balance. 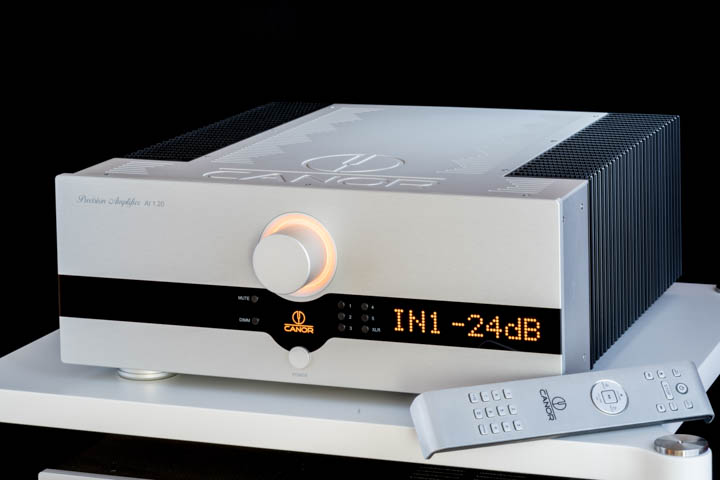 This Canor has a trick up its sleeve for those in need of extra power, it can be used as single channel monoblock with its preamplifier section controlling a second amp in a master and slave arrangement. This would have to be another AI 1.20 as there are no power amplifiers in the Canor range. There is a third speaker terminal on each channel and XLR outputs specifically for using this amp as a monoblock, it’s unconventional but quite clever and doubles the specified output. Otherwise the connections are conventional with five pairs of RCA socketed line inputs provided. At this price some will be looking for at least one input on XLR while others might be looking for digital inputs, but this Canor has all that the speaker-using music lover really needs.

Inside the precisely executed casework are Canor’s milled circuit boards (CMT); by using this process Canor claims to bring the performance of printed circuit boards close to that achieved in point-to-point wired circuits. This was developed primarily for the tube circuits in other products; an area where point-to-point wiring has long been favoured, because it reduces losses and signal deterioration. Canor’s CMT achieves this and maintains consistent layout which is far more difficult with wiring.

Control of the AI 1.20 is achieved with the tactile volume knob and input buttons on the front panel or with the slightly lightweight but perfectly functional system remote that’s supplied. A large dot matrix style display tells you which input is selected and what level the volume is at in the engineer preferred minus decibel style (0 being maximum output) that’s bound to confuse the layman but very popular in our field. The volume control uses relays rather than a potentiometer which is generally good for sound but means a quiet click with each step. There is the option to dim or defeat the display and to mute the output but this latter function doesn’t appear to be repeated on the remote handset.

The most sensitive loudspeaker I have to hand is the Bowers & Wilkins 802 D3 so that was what I hooked up to the Canor. While it’s sensitivity is quoted as 90dB, it has always had a reputation for being a difficult load so I was a little concerned about how well it would partner with the low output of the Canor. It turned out that I need not have been worried as the pairing proved remarkably well-matched both in balance and power terms. That said there did seem to be an awful lot of midrange detail when first switched on, it brought out the percussion to a higher degree than usual on a familiar track but after the amp had had some time to warm up, and it does run hot, this aspect became less obvious and the balance far more even. It retains an impressive ability to resolve reverberation which gives everything a greater sense of depth but the details that make up the reverb don’t take precedence. 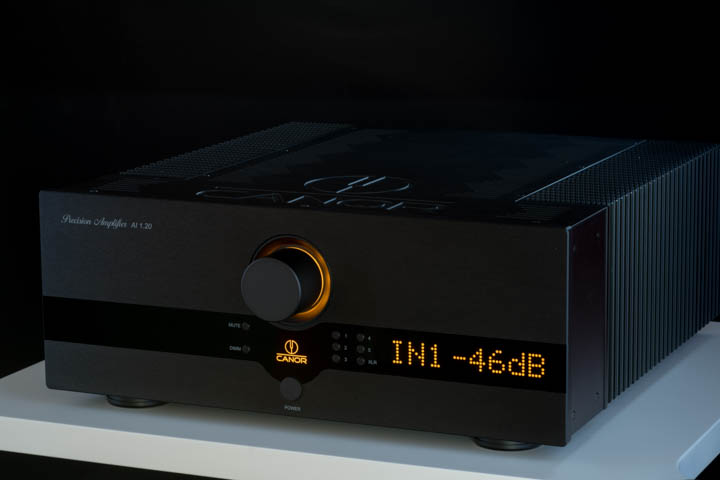 The Canor has the classic Class A characteristic of high perceived detail resolution alongside a relaxed presentation that makes listening a blissfully effortless affair. It means that you really don’t want to press the pause button or pluck the needle out of the groove until you have too, and that’s a very good sign. The music has to be good of course, it can’t make unappealing material suddenly more interesting but it does make good music more engaging and enjoyable, and that’s clearly a bonus. It does this by defining leading edges without the hardness that is typical of more conventional Class AB transistor amps, and it delivers them at high speed too. It’s this combination of smoothness with speed that makes Class A so alluring and this Canor delivers in spades.

Bass is where many Class A amps fall short, especially the valve-powered ones, but the AI 1.20 has power without the sensation of grip you get with big amplifiers. There is less sense of slam or solidity to the bottom end but very good extension and a naturalness that is very appealing. I loved the way it reveals the floor of glittery notes on Radiohead’s ‘Decks Dark’ [A Moon Shaped Pool, XL] without masking the tune’s propulsive sense of timing. Piano notes seem to totally escape the confines of the speakers, they have a vivacity and shine that is inspiring and Krokofant’s clattering percussion contrasts well with the low end muscle provided by the drums and bass of this progtastic band. Again the sense of drive in the music is very well served by the speed with which this amp renders attack and decay, minimal overhang creates space for the succeeding notes to make maximum impact. This Canor has similarities to a good push-pull valve amplifier but better control in the bass.

Voices also benefit from its open, wide band resolve, bringing the singers into the room along with the rest of the band. Some voices seem more prominent than usual but very realistic with it, one example being Bill Callahan’s Sometimes I Wish I Were an Eagle [Drag City] where the depth of tone is just extraordinary and this makes the music that much harder to tear yourself away from.

With vinyl many of these qualities are enhanced because the format plays to the same strengths, Charles Mingus’ Pithecanthropus Erectus [Speakers Corner] is delivered with a radiance and pace that is very exciting. I love the way that the Canor delivers the energy of the brass without any glare, and you can play it that much louder without discomfort as a result. It also does so with solid imaging, this isn’t a particularly large scale amplifier – I suspect a different speaker might help here – but it does place instruments and voices in 3D space when the recording is this good. With a piece like this it really makes you think about the composition, the reason I suspect for Mingus’ brilliance is that while he plays a background roll on the bass the rest of the band are doing what he wants them to do rather than having free rein. Composition often trumps improvisation where bands are concerned. 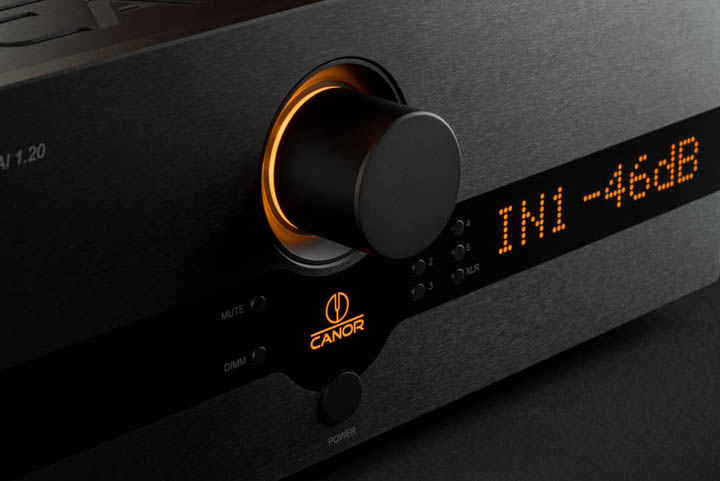 The Canor AI 1.20 is a delightful amplifier, it’s Class A operation means that it’s more relaxed and flamboyant than conventional solid state amps, but also that it’s more easy to enjoy as well especially if you place speed before muscularity. Pair it with a sympathetic, high-efficiency loudspeaker that is evenly balanced and you will have a system that does justice to all types of music and makes it more accessible than most. The low feature count makes this a dedicated device but the fact that it’s dedicated to making your music as fabulous as possible goes a long way to making up for this.